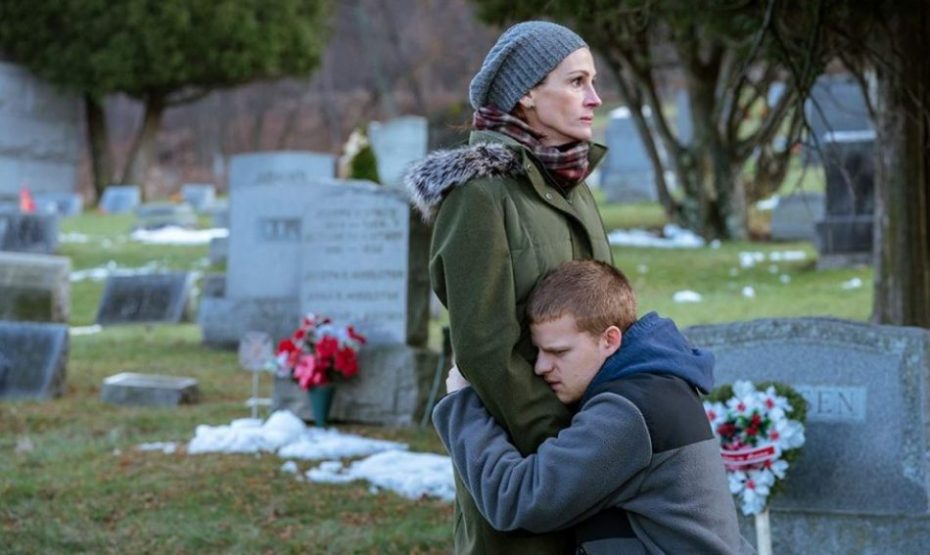 What’s unusual about this is that the last she knew was that Ben, a recovering heroin addict, was in rehab and wouldn’t be home for Christmas. He explains that his sponsor believes it will be good for him to spend Christmas at home.

His sister and step-father aren’t so sure, but wishing the best for her son, Holly allows him to stay on the condition that he doesn’t leave her sight for the duration of the visit.

But as the hours pass, hard as he tries to stay clean and prove to his family that he has reformed, temptation rears its ugly head.

When the family returns from a Christmas concert, there’s no sign of the dog. Could this be linked to Ben’s return?

Ben sets out to find the dog – and, of course, Holly goes with him, into the heart of the world he’s trying to escape, learning for herself the dangers of the underworld inhabited by addicts, many of whom would do anything just to live a normal life again.

Coming just a few weeks after Steve Carell struggled to deal with a drug-addicted teenaged son, played by Timothee Chalamet, in Beautiful Boy, Julia Roberts is basically playing the same part in a slightly different telling of the same basic story. Parents love their children unconditionally and would do anything to help them through their darkest days.

But despite many similarities, Ben is Back puts a different spin on the same premise.

It shares the heart-warming love story between a struggling son and a parent, determined to believe him and prepared to do anything possible to help him, against all advice.

Julia Roberts – at the heart of the film – will take you on a journey that any parent would dread – as Steve Carell did in the earlier film. Lucas Hedges – directed by his father Peter – comes across as a little more sympathetic than his Beautiful Boy counterpart – but only if you trust him, and that’s one of the problems. Whether it’s a result of his underplayed performance or as a subtle consequence of Ben’s assertion that you should never trust an addict – as a viewer, you’re never quite sure whether he’s really better, whether he thinks that he’s really better or whether he has come home for a much darker purpose.

Even as the plot starts to unfurl, his motives are never really quite clear. Did he genuinely believe he was better and only found out later that he wasn’t (don’t worry – it’s not a spoiler – there’d be no drama without this) – or did he simply go home to rummage around for something he’d left in the attic? This uncertainty adds drama and tension – but critically, it means the audience doesn’t know whether this central character is honourable or duplicitous – and so it’s difficult to know whether we should be rooting for him. But in that sense, we’re no different from Julia Roberts’ Holly.

While Beautiful Boy takes place over many years, as we explore the development of his addiction, Ben is Back is set over a twenty four hour period, which makes it a little harder to put his recovery into context; having all the elements of hope, denial and relapse squeezed into one day feels a little contrived, particularly when what amounts to a crime thriller is tagged onto the end of the family drama, and we end up with more of a Hollywood ending than the run-up had suggested.

But from a parent’s point of view, if your child is going to be a drug addict, this is probably the story you’d prefer to reflect reality. It feels a little less nihilistic – but perhaps that makes it a little less realistic?