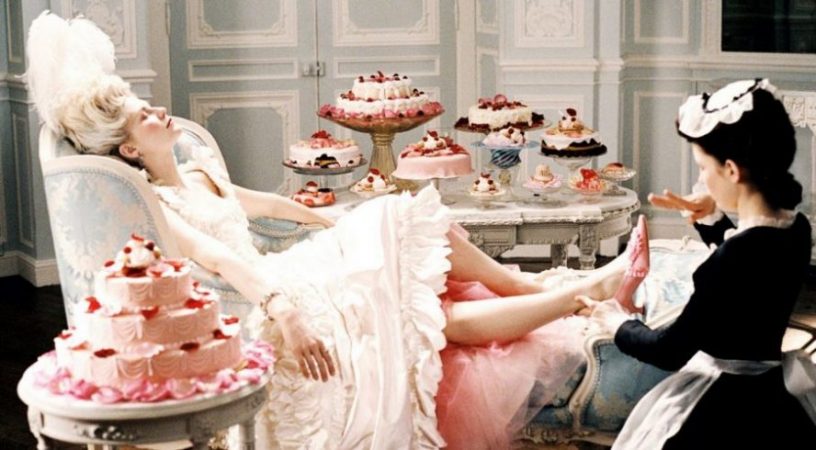 At the age of fifteen, eighteenth century Austrian princess Marie Antoinette (Kirsten Dunst) is married off to the heir to the French throne, Louis (Jason Schwartzman) in the hope of firming up relations between the two countries.

As it turned out, its not a potential rivalry with Austria which could’ve brought down the French Royal Family, but family’s own decadence – a decadence with which Marie Antoinette soon grows very comfortable, but with her husband showing no interest in her sexually, the big dresses and lavish banquets are all she really has to entertain her.

Her husband’s behaviour turns much of the public against her as all they can see is a princess who is failing to bear and heir.

With the death of Louis XV (Rip Torn), Marie Antoinette and her husband pick up the reigns at far too young an age. They’re lost – and lose control of the monarchy – standing by as it all unravels around them.

There’s a public outcry as the monarchy funds wars abroad and its own extravagance at home, but fails to provide for its people.

Well – it’s kind of history. Perhaps the most famous fact about Marie Antoinette – her execution – is missed off the end of this film, allowing it to end with the same ambiguous air enjoyed by the rest of the film.

Her other most famous moment – suggesting that if the people couldn’t afford bread, they should eat cake – does feature – while she’s stuffing her face with pastries, of course.

The film itself is every bit as lavish and extravagant as the lives led by its protagonists – the sheer size of the dresses, the wigs, the stacks of food have rarely been seen on screen before.

And the music cleverly weaves 1980s songs into the soundtrack to provide an oddly kitch score, using one period of history to conjure up the mood of another.

It’s an interesting portrayal of a woman often seen as selfish, suggesting that Marie Antoinette was just a little naïve, being thrown into the limelight without the necessary preparation or guidance – not least from her incompetent husband.

Dunst plays the role with girlish glee, while Schwartzman is clearly having as much fun playing his part as we have watching him.

But ultimately, the film is rather unsatisfying – it’s a loud and visually exciting study of a life which somehow should seem far more vibrant and interesting than it does.

Much like Marie Antoinette herself, the film is rather more style than substance.