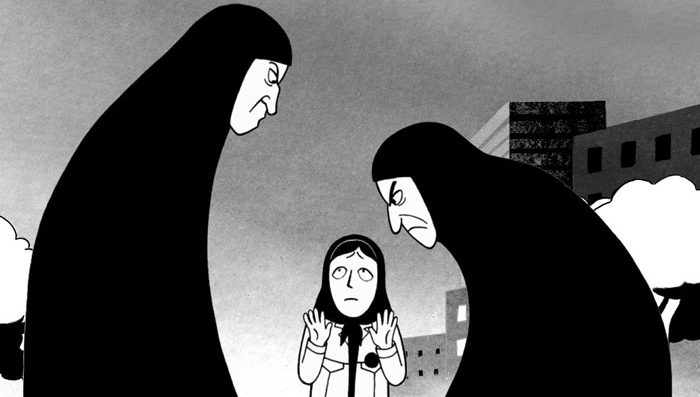 After western-leaning liberals helped to bring down the Shah of Iran in 1979, they were shocked to see Islamic fundamentalists take over the country, rather than the democracy they’d dreamed of.

Young Marjane (Chiara Mastroianni) doesn’t really understand the significance of this, and her youthful exuberance and naivety – and her big mouth – threaten to get her and her family in trouble.

Her parents can’t bear the idea of her being subjected to the oppressive regime, so they send her to Vienna to study.

As an adult, she moves from country to country but never quite fits in, and eventually decides to head back home.

But if she was too outspoken before, with an education, she’s even more critical of the regime and concluding that freedom appears to be no closer than it was when she left, she doesn’t feel any more comfortable at home than she did abroad and she loses all sense of where she belongs.

A black and white animation about the rise of Islamic fundamentalism in Iran, as told through the eyes of a young girl doesn’t perhaps sound like the most commercial of pitches, but the film-going public will undoubtedly be better off for someone having had enough faith in the idea to fund it.

For anyone unfamiliar with the history of Iran, it can be seen as an education, if perhaps a little partisan.

For anyone close to the subject, it might seem a little simplistic and more idealistic.
The animation is simple but effective – beautifully evoking the imagination of a young girl who dreams of a world where freedom and free thought reign.

But by its very nature, the film does feel – at times – a little preachy and patronising – not least because of much of it is the writer/director’s recollection of how the adults spoke down to her, when she was a child.

And being a bit single-minded, as a young child she’s cute, but as an older woman, she’s a little less sympathetic.

And ultimately, by the close, the film feels a little hollow, as it doesn’t seem to bear a substantial conclusion – clearly the Iran of the present day is not substantially different from the Iran she is describing, so it’s not like this was ever going to have an “and they all lived happily ever after” ending, and she hasn’t changed either – once an political agitator, always a political agitator.

Unusually for a feature, neither the main character nor her surroundings particularly develop during the course of the film, which means there’s little to gain emotionally from the experience – educational and enjoyable as it is.