The first people you encounter on arriving at the Golden Globes as a guest are not the stars. They aren’t even the security. They’re the protesters. And this year, the first to wave his placard at the cars, as they queued to be checked over by the FBI was a fundamentalist Christian, reminding us that “Jesus Christ is Lord,” in case this fact had passed us by over decades of watching Christmas movies. Although to be fair, I guess his point was that Jesus has long since even been mentioned in Christmas movies.

Catching a glimpse of one of the guests in our car, desperately trying to touch up her mascara before we had to alight, the protester shouted, “Make-up won’t save you from the day of judgement.” This did not dissuade her from the matter in hand.

After the FBI checked the bottom of our car with mirrors on sticks, in a kind of procedure normally seen only in films, rather than outside a film award ceremony, we were waved through to the next set of protesters, including someone in the now-obligatory V-for-Vendetta Guy Fawkes mask, holding a sign reading “Occupy Hunger.” 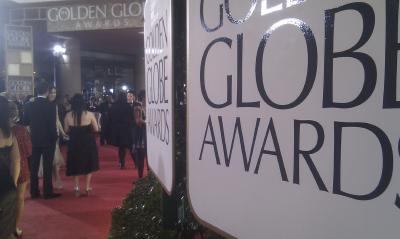 Then, across Wilshire Boulevard, we arrived at the Beverly Hilton Hotel, the exclusive home of the Golden Globes, where no sooner had we jumped out of the car than the valets had driven off to make room for the next arrivals, as we were ushered through the next wave of security – airport-style metal-detectors.

Having missed the entrance onto the red carpet, we almost barged through the back of a television interview, before being pointed in the right direction to pass the photographers and journalists among whom, at any other ceremony, I would be waiting to snatch a photograph or a quote from the passing celebrities. 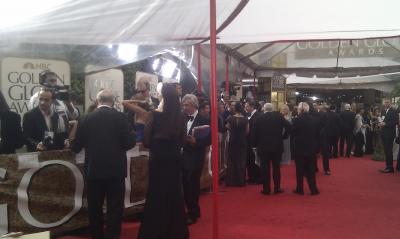 But along with Los Angeles entertainment journalist Husam Asi, a member of the Hollywood Foreign Press Association that votes for the Globes, I was marching down the middle of the red carpet, rather than stuck behind the barriers at the side. And rather than begging the stars to come to talk to me, they were turning to me like I was one of them.

“Excuse me,” Claire Danes turned to me. Standing upright and bristling with a newfound sense of importance, I smiled at the nominee, expectantly. “You’re standing on my dress.” Still, that’s one way to get an introduction. 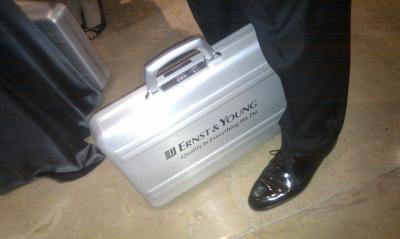 At the end of the red carpet, at the entrance to the ballroom, representatives from the accountants Ernst & Young were guarding the metal brief-cases that were all that stood between the names of the winners and the world. There, we said goodbye to the journalists, slightly disappointed at not having shared the walk with more big names, and took our seats at dinner tables that wouldn’t have looked out of place at a Royal wedding – I’m guessing; I hasten to add that I’ve never been to one. 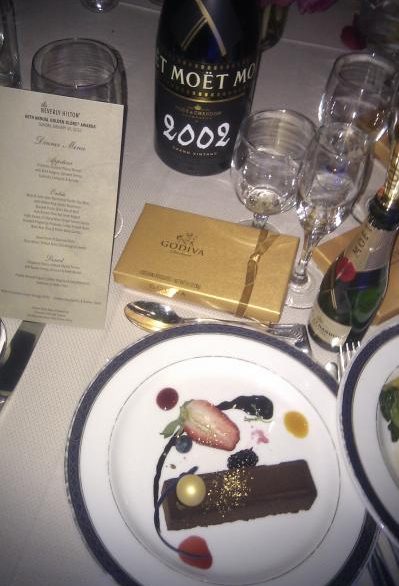 Most of the biggest stars – the Brad Pitts and the George Clooneys – didn’t join the red carpet until a little later, while the other guests are already in the ballroom, enjoying the meal of Pistou Ravioli, Kapocha Compote and Burrata, Porcini Pine Nut Herb Ragout and other things I’d previously never heard of. The more star-struck guests passed up the culinary experience to take photos of the big names as they entered the room. And for the top celebrities themselves, who reached their seats just in time for the opening of the show, their dinner came from the buffet bar, during the commercial breaks.

Britain’s biggest comedian was hosting America’s second biggest awards ceremony on the third biggest network – or so began Ricky Gervais in his third successive year compering the Golden Globes on NBC. After garnering more of the headlines for himself than for the winners at last year’s event, Ricky Gervais was far tamer this year. He started by joking that if he offends anyone, he’ll be invited back, but proceeded not to offend anyone. He was certainly less vindictive and more playful – introducing “the evil Colin Firth” was clearly not going to upset anyone. Even his annual jibe at the HFPA itself – suggesting that its members were like the characters from Boardwalk Empire; immigrants who become power-hungry and corrupt – was delivered with a knowing smile, unlike last year’s close-to-the-bone suggestion that the biggest stars were nominated only because the HFPA members wanted to have dinner with them. Just to make it clear that no offence was meant, he insisted, “They’re good sports for having me back,” before joking that this year’s audience was much better than last year’s.

At ceremonies such as this, the host never gets to hand out any prizes. He simply strings together the appearances of the celebrities who honour their peers. Brad Pitt was one of the first to take to the stage, supporting himself with a walking stick. A few minutes later, George Clooney found himself at the same microphone – with the same walking stick. Later, when he returned to collect his Golden Globe for the best leading actor in a drama, he was able to support himself without Pitt’s stick.

Arriving fashionably late to my table, second closest to the exit, with no clear view of the stage, one guest remarked that he was “with the help” – and he wasn’t suggesting he was part of the crew of the 1960s civil rights film that won the best supporting actress prize for Octavia Spencer. To impress upon his fellow diners his status in Hollywood, when Laura Dern collected her trophy for the best actress in a TV comedy, he announced that her mother, Diane Ladd, played in his poker game.

The show itself is interspersed with adverts that allow guests to stretch their legs and visit the bar. During one such break, the Bridesmaids star Kristen Wiig got stuck between a security guard and the door he was trying to keep clear. During another, I thought I’d made another celebrity friend when the director Curtis Hanson approached me. “Can you tell me where the restrooms are?” he asked.

Collecting her third Golden Globe – and her second in successive years – my new friend and the star of TV’s Homeland Claire Danes joked that during last year’s acceptance speech, she’d forgotten to thank her parents and tell them she loved them. The winner of the best actor in a comedy film, The Artist‘s Jean Dujardin, fittingly accepted his trophy silently. Perhaps one of the most expected winners of the night, Meryl Streep, thanked “everyone in England for letting me trample over their history” as her portrayal of Margaret Thatcher in The Iron Lady earned her an eighth Golden Globe.

Streep returned to her table where a proud executive, Harvey Weinstein, was sitting between her and Michelle Williams, whose portrayal of Marilyn Monroe in My Week With Marilyn earned her the trophy for the best actress in a comedy. All in all, it was a good night for the man his stars refer to variously as The Punisher – and even God. As well as his leading ladies taking a clean sweep in the lead acting categories, Madonna took the prize for the best song for her directorial debut W.E. and the best comedy film prize went to The Artist, although of all the people up on stage, it was neither Weinstein nor his lead actor  Dujardin who was the centre of attention, but Uggie the Jack Russell – who himself is up for an award at the Golden Collars, honouring the best performances by dogs. 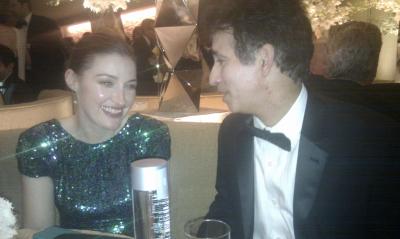 With the awards out of the way, it was time to start partying – and with the Weinstein Company celebrating more awards, they felt inclined to extend the guest list a little further, providing more opportunities to eat, drink, dance and generally party. Scattered across the hotel, from Sony on the roof to HBO around the lower-ground-floor swimming pool, broadcasters and studios hosted events at which their own stars could be shown off or commiserated. At HBO’s reception, we accosted No Country for Old Men and Anna Karenina star Kelly Macdonald. “I’m Kelly,” she beamed as I approached, which was a nice touch for one of the most familiar faces of British cinema. “I know you you are,” I beamed back. At Warner Brothers’ party, Matt Le Blanc, put his Globe for Episodes down beside his co-star Stephen Mangan and turned to me. “Hey man!” Had I made another friend? “Could I bum a cigarette?” And no, Mum. Don’t worry. I wasn’t smoking.