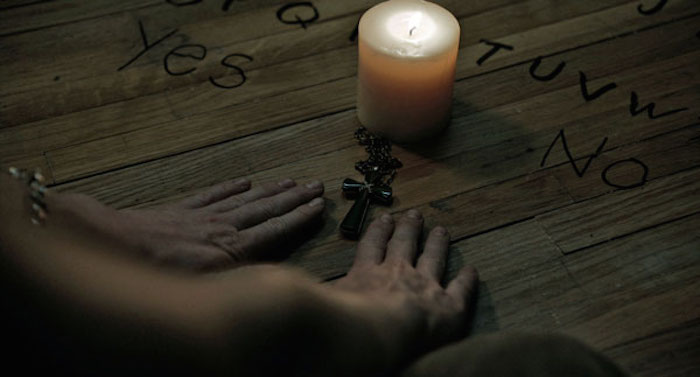 The plan is for her and her sister to sort out the house, before they go their separate ways, but when she arrives, there’s no sign of her sister.

As she waits in the house, memories of horrific events from her childhood start flooding back to her, while the house literally goes bump in the night – and more.

Annie becomes convinced that the strange goings on in the house could be linked to a series of murders, being blamed on a killer known as “Judas.”

Luckily, Stevie (Haley Hudson), a blind girl from her past, just happens to be a medium, so she persuades her to visit the house to help her uncover its secrets and enable her to restore normality to her life.

This is clearly sold as a horror, but for the first twenty minutes of the film, the most frightening things are the wallpaper and two gherkins that mysteriously appear on the kitchen floor.

From this point onwards, we’re treated to a veritable cornucopia of corny horror tricks – the sudden burst of noise when nothing is actually visible on screen, slow camera moves into dark spaces, spooky stories, ouija boards and illogical sequences of events that serve no purpose other than to allow more cliches to pile up.

The whole sub-plot involving the medium is redundant, because she provides the answer but Annie proceeds to ignore it and investigate further and some time later does what the medium suggested off her own back. She wasted Stevie’s time – and ours.

Most other attempts at plot are incoherent or, at the very least, ill-explained.

There’s another narrative device which involves a main character climing through a hidden trap-door in a wall, which – it turns out from events later in the scene – is spurious.

The continuity is among the worst in any recent film; in close-ups of a cross in the ouija-board scene, sometimes it has a chain attached and other times it doesn’t.

When the denouement is revealed, it feels unconvincing.

And most peculiar of all, as you leave the cinema, shaking your head, you’ll be wondering “What pact?”