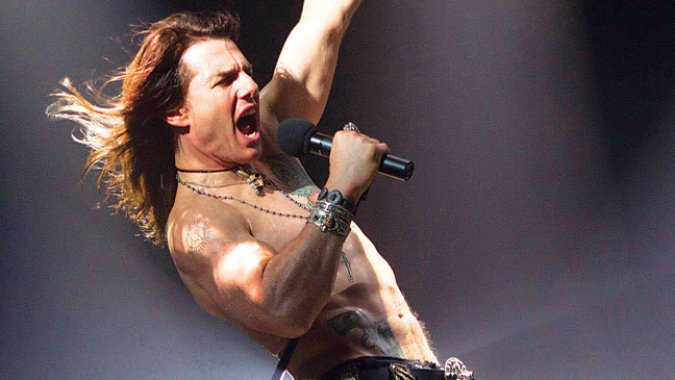 Smalltown girl Sherrie (Julianne Hough) heads from Oklahoma to the City of Angels to try to make it as a singer. After being mugged on arrival in LA, she bumps into city boy Drew (Diego Boneta), an aspiring rock singer, who offers to help her get a job at the music venue where he works – the slightly sleazy Bourbon Room on the Sunset Strip.

The pair are instantly attracted to each other and vow to help each other achieve their dreams.

The venue’s owner Dennis (Alec Baldwin) has struck hard times – he’s deep in debt and only the takings from a bumper gig from the world’s greatest heavy metal star Staycee Jaxx (Tom Cruise) can save his business.

But the mayor’s puritanical wife Patricia (Catherine Zeta-Jones) is trying to close the club down, while Staycee’s oily manager Paul (Paul Giamatti) has his own devious plans that could yet sink the Bourbon Room.

Rock of Ages is many things.

It’s a big screen adaptation of a successful Broadway and West End musical.

It’s a love story about two aspiring young singers, hoping to work their way to the top of their profession by starting out serving beers to gig-goers.

It’s the story of a bunch of housewives trying to clean up LA’s sleazy Sunset Strip, as a club owner is struggling to keep his business – and music – alive.

It’s the story of a self-important, hard-living rock-star who’s still the toast of the industry, although his personal life is crumbling into mindless, womanising and alcohol fueled unreliability.

But packed with some of the biggest glam metal hits of the late 1980s, it’s also a nostalgia trip for 40-somethings to recall their long-haired, head-banging youth, to a soundtrack of classics by Def Leppard, Journey, Poison, Foreigner, REO Speedwagon, Whitesnake and Bon Jovi, among others – sung by the cast – and occasionally mashed up with lesser known songs.

Yes – this is a full blown musical, where the action stops so that the cast can have a sing-song – often with different characters in different scenes, performing the same musical numbers.

You get the peculiar sight of a character who’s just jumped onto the counter at a record shop (remember them?) to sing about his dreams of being a rock star, before he climbs back down and says “But the problem is, I have stagefright.”

And rockers exclaiming “Here’s a little song I wrote,” when we all know it was actually hit for Journey six years before the film is set.

Even for those not put off by the contrived nature of the genre, it’s all nonsense – particularly the central love story, which is derivative and uninspired – ironic for the tale of two aspiring artists striving to achieve their dreams. And when the film strays from its rocker roots and starts exploring the world of pole dancing, it literally starts to lose the plot.

But the older cast members are outstanding, from Alec Baldwin (OK, so he can’t sing, but that’s part of the fun), to a Brummie Russell Brand as his assistant, to Paul Giamatti’s slimy manager and Tom Cruise, aping Axl Rose, in one of the most surprising but intentionally hilarious performances of his career.

If only the Academy had a sense of humour, he’d be dead cert for an award.

It’s one of those odd films with a difficult target audience. Would fans of musicals enjoy 1980s heavy metal? Would the 40-somethings who’d be taken back to their high school days be interested in a love story about two teenaged dreamers?

But despite the film’s shortcomings, the music is so cleverly entwined in the narrative with such remarkable performances – particularly from Cruise, Baldwin and Brand – that only the most hardened thrash metalheads could leave the cinema without feeling that they’ve just had two of the most enjoyable hours of their film-going year.

For many viewers, to borrow the title of the opening number, experiences Rock of Ages “must be just like living in paradise.”

It’s certain to be doing the rounds as a sing-a-long-a-film for years to come.