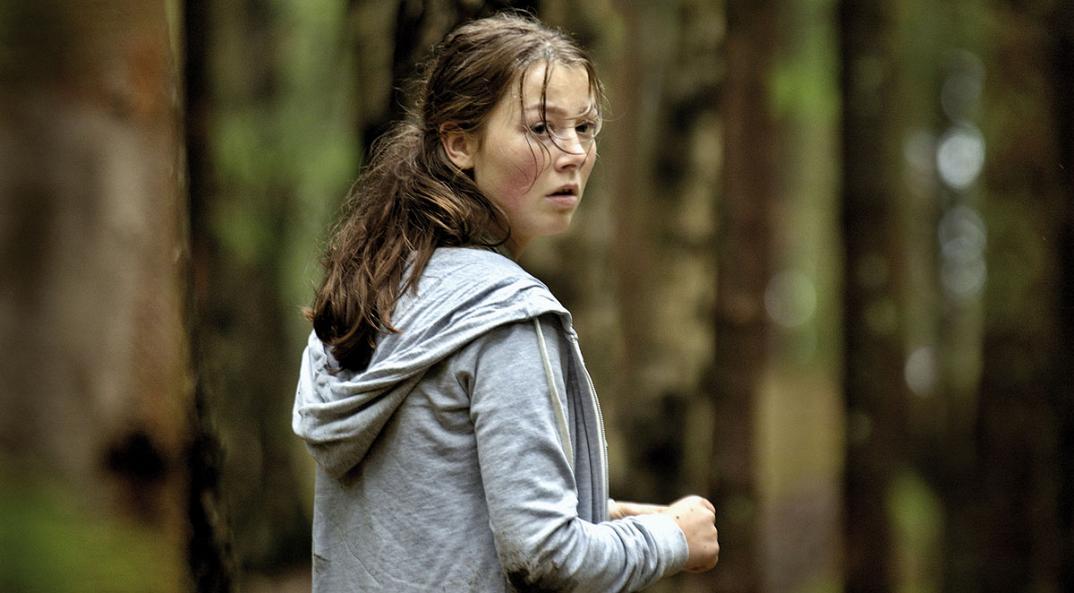 On 22nd July 2011, hundreds of young members of Norway’s ruling Labour party were enjoying a summer camp on the island of Utøya, west of the capital Oslo.

News came through of an explosion outside the prime minister’s office in the capital. As they were waiting for details, loud pops were heard. In the distance, but getting closer. Gunfire.

Screaming youngsters scattered across the island, into the woods, down the cliffs to the beach, as a distant figure, dressed in a police uniform, hunted them with an apparently endless supply of ammunition.

In this film, we follow a youth worker, Kaja (Andrea Berntzen), as she tries to lead a group to safety and breaks away only to find her sister, during what seems to be an interminable wait for help to arrive from the mainland.

The characters and story at the heart of this film are fictionalised but the background – the terrifying attack by a white-extremist terrorist – is very real.

Told almost in real-time, in a single shot, through a hand-held camera that’s never more than a few feet from Kaja’s face, this is a harrowing account of what it must feel like to be hunted by unknown attackers with no protection and no idea when – or whether – help might arrive.

It’s been a little over seven years since the tragic murder of 77 people – 8 in the bomb in Oslo and 69 on the island – and two films about the incident have come along at once.

One is by the United 93 and Captain Phillips director Paul Greengrass, who’s no stranger to bringing terrifying real-life stories to the big screen, with his visceral, inimitable hand-held camera, putting the viewer right in the heart of the action.

This is the other one – but Erik Poppe’s film seems more like the work of Paul Greengrass than Greengrass’s own film on the subject.

While the British director gives equal screen time to the attack, the police investigation and the court-case, each one putting the killer very much at the heart of the action, Poppe follows one teenager as she tries to get herself and her sister to safety – but without ever showing us the gunman or considering why he was doing what he was doing.

There’s a sense in which this dehumanises the killer – we are not even told his name, not even in the closing captions – and rightly shunts him to the dark corners of history where he should be forgotten, giving prominence only to the heroes of the day. But the technique also serves to deliver a somewhat nihilistic thriller – it’s a nail-bitingly tense, chilling hour and a half but it’s one, long, riveting action scene with no real drama.

In the Greengrass film, we get to meet the killer and find out what he thinks he’s trying to achieve. But we also meet a teenager who was critically wounded and follow his journey to recovery as he builds up to the moment when he can confront his nemisis in court.

Here, however, there’s no character arc – no cinematic  journey – no discovery – just a single, lengthy burst of panic in which, in truth, survival comes down to nothing more than luck. A piece of drama is generally more satisfying if the viewer has a sense that the fate of the protagonist is in their own hands, rather than in somene else’s.

And by following a single character – and the small group of teenagers she encounters – we never get a true sense of the scale of the tragedy that was unfolding.

The up-close, Greengrass-style of camera-work is an effective tool, but it usually represents someone’s point of view – but whose is it here? This film is less told from Kaja’s point of view as it is from that of an unseen individual, who follows her around the whole time without directly interacting with her.

A set of closing captions are all that can put the attack into context, but they offer no real insight into the horrific events of 22nd July 2011. The most profound thing they can tell us is the somewhat unsurprising revelation that violent, right-wing, white-supremecist terrorism is bad.