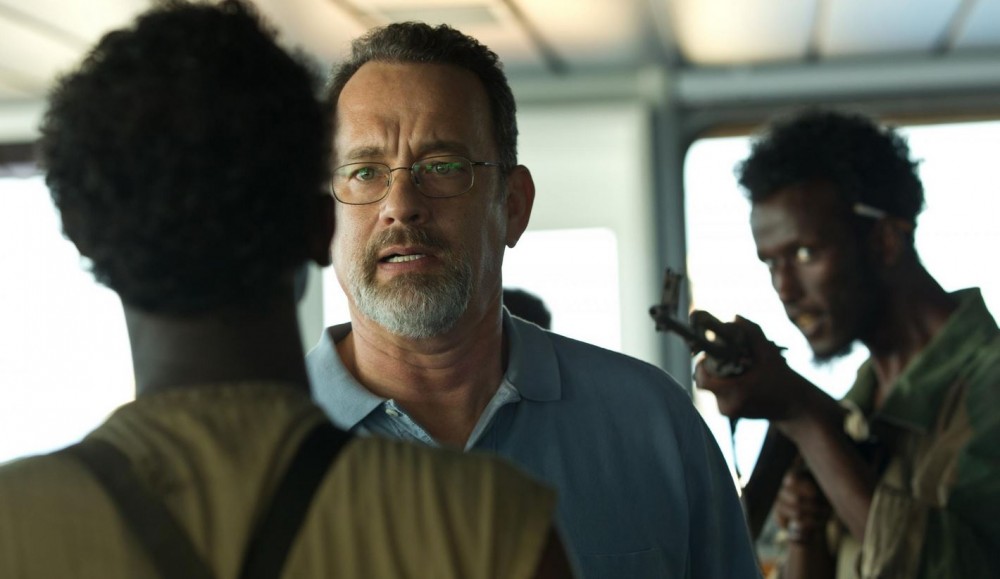 In the spring of 2009, American merchant seaman Richard Phillips (Tom Hanks) leaves home for just another job. All he has to do is guide the Maersk Alabama cargo ship on a trip around the Horn of Africa.

As an experienced captain, he is used to all the obstacles nature can throw at him, but nature – it turns out – isn’t the only threat; when he spots a small fishing boat approaching, with four armed men on board, he steers a course away and hopes to see them off.

But when, undeterred, the Somali pirates get close enough to fire at Captain Phillips and his crew, he has to take action.

He sends the bulk of the crew down to hide in the engine room and calls in military reinforcements, but with help several hours away, even powerful water jets can’t stop the pirates getting on board.

Thinking on his feet, as he waits for military back-up, Captain Phillips puts his life on the line to protect his cargo and his crew as he tries to keep a step ahead of four desperate, armed criminals, hoping for rather more than the thirty thousand dollars he offers them from his safe.

Paul Greengrass has deservedly built up a reputation as the go-to director for action; from the second and third Bourne films, to United 93 and Green Zone, he’s developed a technique unmatched in its ability to unsettle the audience and thrust them into his world.

Even as Tom Hanks is packing his bags for his trip, the close-ups, shaky camerawork and fast editing have you biting your nails in anticipation, long before the plot kicks in.

As if to lull you into a false sense of security, and presumably in a slightly clumsy attempt to show you that Captain Phillips has a wife and family who’ll miss him if anything bad happens, the film begins with a somewhat ill-judged drive to the airport, with expositional dialogue, filmed from behind, as if they didn’t decide what he and his wife (Catherine Keener) should be saying to each other until the film was already edited.

But from this point on, Greengrass pulls out the big guns, slowly ratcheting up the tension, scene by scene, and just as you think it can’t get any more exciting – or any more terrifying – he finds yet another gear to step it up to.

At well over two hours in duration, this fitting London Film Festival opener doesn’t feel a second too long.

Having started with the long-since forgotten banality of a drive to the airport, once the action is out of the way, the film winds down with another scene with no narrative purpose, but this one serves to give Hanks a chance to show the Academy that he’s overdue another Oscar as he shares a cathartic moment with the audience whose hearts will long since have stopped and fingernails will long since have been bitten to the roots.

From the performances to the direction and editing, Captain Phillips is sure to be this award season’s Zero Dark Thirty, as a real-life, military-based thriller that finds shocks in the most unexpected places and highlights an ongoing problem. It’s frightening that so few young men can cause an international diplomatic incident by hijacking such a huge ship, despite the threat of the US military; they’re like a malaria-infected mosquito – a tiny insect with the power to topple a human.

The film also – briefly – considers what drives the pirates to do what they do, initially using different camera techniques to show them in their village to contrast their lives with the more familiar existence of the captain and his crew. Greengrass even manages to conjure up a little sympathy for one of the pirates, although that seems to be a little artistic licence – but in a film this thrilling, that can probably be excused, as it intensifies the emotions even more; it would be a little churlish to protest to a film-maker that he’s made his film too entertaining.