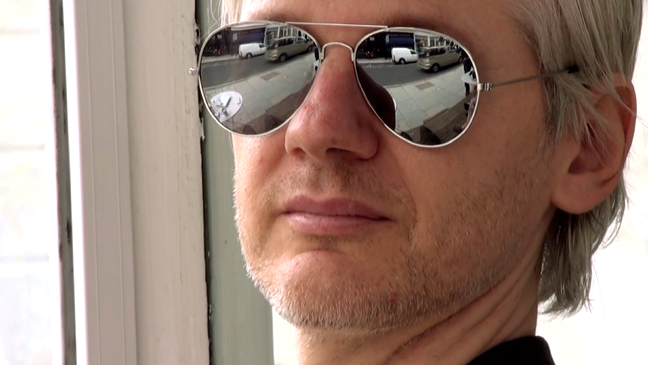 As its title would suggest, award-winning Alex Gibney’s latest documentary chronicles the story of one of the most notorious websites WikiLeaks, and its founder Julian Assange.

Gibney follows Assange from an idealist Australian computer hacker, through helping whistle-blowers to expose government secrets to a man, trapped in the Ecuadorian embassy in London, to avoid extradition to Sweden on sex charges.

This is particularly apposite time for this documentary to hit the big screens, as the latest in a line of leakers, Edward Snowden, is still sitting in a hotel at Moscow Airport, just as Julian Assange himself is sitting in London’s Ecuadorian embassy and Bradley Manning – the American soldier whose communication with WikiLeaks led to the infamous cable leaks – is sitting in jail, awaiting the end of his trial for espionage.

Alex Gibney – who’s previously scored success with documentaries about Enron and child abuse in the Catholic church – is on slightly more balanced territory here. His film turns out to be unexpectedly balanced, as it flips from describing an idealist to a highly controversial hermit whose ideals seem to have left him.

What initially seems to be an admirable need to expose scandal at the highest level in government, banking, the military and other major institutions around the world, became an equally determined scramble to defend himself, not against the espionage charges he’s facing in the US but against charges of sexual assault on two women in Sweden. Gibney gives rare voice to these women as they press home the fact that they are not interested in allegations that Assange was involved in spying against the US – they just want justice for the way they claim to have been treated – and, in fact, matters that he does not appear to deny.

But it’s hard to know exactly what he does think, as this documentary about the man behind WikiLeaks notable for the absence of the man at the heart of the story. Gibney says Assange demanded a million dollars to be interviewed, as he argues that the man who built his reputation on leaking secrets was now more interested in keeping them. Whether his participation in the film might have made a difference to Gibney’s approach is open to question, but it’s unsurprising, in the circumstances, that Assange has denounced the documentary.

A string of former colleagues concur that as Assange himself became as much the story as the information his website helped people leak, he became harder to contact and harder to communicate with himself. As transparency at any cost gave way to self-serving opaqueness, even his morals are questioned by those who used to be his closest associates. “WikiLeaks has become what it detests,” his former partner in the organisation confesses. What’s perhaps most notable is that as his supporters turn against him one by one, about the only people left – in Gibney’s film at least – who still back him are the conspiracy theorists who brand the Swedish women liars and CIA spies.

From the start, Gibney presents Assange as a sociopath, but this quality was initially put to honourable uses, but it becomes more dishonourable as the years progress and the vice is tightened around him.

With some fascinating contributions to the subject by a former CIA director and a former US government intelligence tsar, the documentary takes viewers on an enlightening journey through the underworld of international intelligence gathering.

There’s perhaps a little too much about Bradley Manning – from his gender dysphoria to the online friendship that ultimately led to his downfall – and from time to time, Gibney stretches a little further than his reach, suggesting that WikiLeaks might even have been responsible for the Arab Spring.

Of the contributors – and former associates of Assange – the Guardian’s Nick Davies comes out of the film with the most integrity, as the documentary twists to become less pro-Assange than one might imagine and more pro-Manning and pro-transparency, but not at any cost.