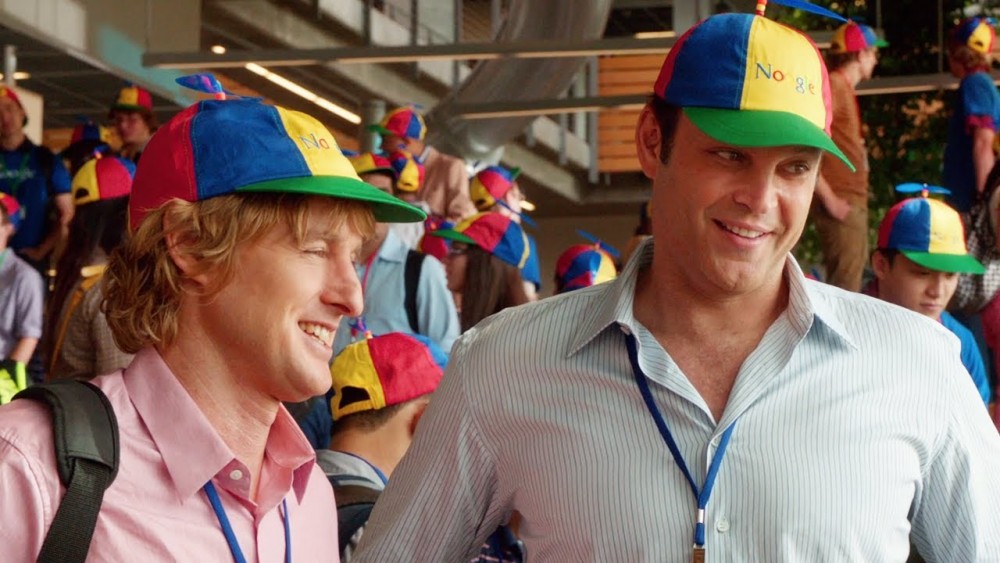 When watch salesmen Billy (Vince Vaughn) and Nick (Owen Wilson) find themselves out of work, Nick takes a job in his brother-in-law’s bed shop, but Billy has bigger ideas for the pair.

He signs them up for an internship programme at Google that pits teams of hopeful computer geeks against each other to vie for just a handful of a jobs.

Being twice as old as their rivals, no-one wants them on their team, so they wind up with the left-overs after the likes of cocky Brit Graham (Max Minghella) sweep up all the best candidates.

Under the watchful eye of the course director Mr Chetty (Aasif Mandvi), the teams go through a set of Apprentice-style challenges until the members of the winning team are awarded with jobs.

But Nick has his eyes on a different prize – he’s fallen for Dana (Rose Byrne), a charmlessly supercilious Google executive.

From the moment our protagonists find themselves out of work on the grounds that no-one’s buying watches anymore – their boss, John Goodman, has been convinced that anyone who wants to know the time, just looks at their phone – this film starts spiralling out of control, beyond rescue.

One cliché after another is thrust upon us – Aasif Mandvi’s comedy Indian accent, Max Minghella as the smarmy Brit, Rose Byrne as a stuck-up executive who’d never fall for sweet Owen Wilson in a million years – even the premise of the film is a cliché; can a rag tag group of underdogs trying to beat the odds and the world’s greatest computer geeks at their own game?

The structure of the film is lazy – there are a dozen or so rival teams, but we get to know only Billy and Nick’s and the captain of another – Max Minghella’s Graham. And even though every last member of our protagonists’ team is a no-hoper, we’re expected to believe that the competition was only ever going to be between their team and Graham’s.

There was nothing at all convincing or original about the pedestrian plot and the romance between Wilson and Rose Byrne was as unlikely as it was inevitable in the circumstances – the “com” needed a little “rom” after all.

It wasn’t all painful – Wilson and Vaughn are both talented enough comedians to raise a laugh from a line here or a look there, but any successes are down to their talent rather than anything specific to this film.

As if the film itself didn’t feel enough like a two hour long advert for Google – with all its cool, colourful people in its cool, colourful headquarters – most of the tasks the teams had to complete involved using Google products (Hey – isn’t it great that Google has a programme that will do this or that) and the closing credits are all drawn using Google products, just in case you missed one during the film.

This is very much a case of the actors clearly having more fun than us – and while it’s enlightening to learn that Google feeds its staff as much as they want, free of charge, that’s not a joke. And even if it’s true that new recruits wear colourful hats labelled Noogle, that’s just embarrassing.

The two talented and charming leading actors do their best to make the most disappointing comedy of the year so far just a little more entertaining than it has any right to be, but the sad truth is that a bunch of interns could have made a better film.