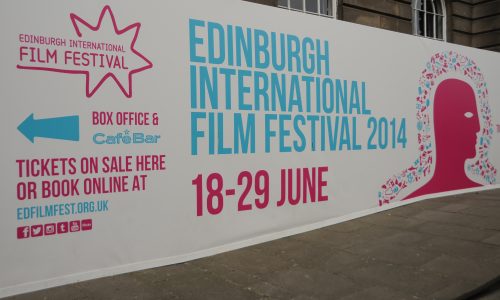 Every film festival has its own identity and they’re all about so much more than just watching films. From industry seminars to networking events and awards ceremonies, festivals across the world provide days of activities for everyone from film-makers and journalists to, in most cases, members of the public too. But even the most discerning cineastes don’t always have time, or indeed the means, to attend festivals in full. Jason Korsner squeezed a whole festival experience into just one day at the 68th Edinburgh International Film Festival:

What a busy Friday. Having flown into Edinburgh last night, it was an early start to collect my credentials badge from the press area at the Traverse Theatre, to allow me to attend the many varied events I had lined up for the day.

With my film-maker hat on, the first appointment of the day was a meeting with the BFI’s Christopher Halliday. His job is to advise on how to ensure that your film qualifies as a British production that can benefit from the government’s tax relief scheme that can help producers recoup up to 25% of 80% of their budget. As the figures suggest, it’s all somewhat complicated, but if, like mine, the bulk of the film is set in the UK or Europe, shot in the UK or Europe, involves British or European characters, actors or crew and is in English, or another European language, you’re likely to make the grade. But while German film-makers shooting a feature in Spain with Greek actors playing Italian characters, speaking in Polish might qualify, there wouldn’t be much point in going through all the paperwork as the tax relief is available only on the money spent in the UK.

Many of the films screened at film festivals are unlikely ever to see the inside of a cinema again, largely because while they have artistic merit, they’re unlikely to have the commercial capacity to attract enough bums on seats to excite distributors and exhibitors. Such films are generally at the more obscure end of the spectrum and often appeal to those who love the art of cinema, rather than a night of noisy car chases, explosions or grisly murders. This target audience of cinema-lovers might recently have enjoyed the magnificent fifteen part The Story of Cinema documentary series by the Northern Irish critic and director Mark Cousins, so the prospect of seeing his new film was exciting to me. Life May Be is billed as an exchange of correspondence between Cousins and the exiled Iranian film-maker Mania Akbari. It begins promisingly enough, with a lengthy static shot of cloud floating through a valley in the Scottish Highlands as Cousins reads a letter he wrote to Akbari. In it, he explains to her why he is so passionate about her work, including detailed descriptions of key scenes in some of her films. The idea of talking about films using verbal descriptions, rather than clips of the films, is an interesting way of analysing what makes films work. The next section of the film involves Akbari’s response, using moving images to illustrate her arguments, including what amounts to an essay highlighting some of the cultural differences between Iran and the West. The scene is set for a fascinating cinematic cultural comparison between two very different worlds, but it degenerates into a somewhat unsatisfactory and self-indulgent polemic about how, even in the liberal West, governments won’t allow you to walk around naked. Not what the doctor ordered.

Trying to squeeze in as much as I could on one day, I had to run to make it back from the Cineworld to the Filmhouse in time for the awards ceremony, but this was an awards ceremony unlike any other I’d reported on. Whether it’s the Oscars, the Golden Globes, the London Film Festival or Cannes, for example, the form is usually an evening of entertainment, involving an appropriate celebrity humourously introducing a string of industry-related presenters to read out a list of nominations, following which a winner will be announced, who will excitedly clamber up to the stage to collect some form of elaborate trophy, thank everyone from their collaborators to their mothers in a speech that was hastily cobbled together on the understanding that it would never be heard by anyone other than their partner, before heading backstage to pose for photos and speak to rows of journalists with searching questions. But not at Edinburgh. The presenter of a local TV show about film introduced a handful of festival sponsors, who in turn came to the podium to read out a citation praising a winner who, in most circumstances, wasn’t there to accept their engraved pewter pot. Those who were there posed for the photographers, sitting in the front row, while the audience waited to hear their response, a routine that was repeated even in the cases where the winner was not in attendance. In some cases, one of the judges “accepted the awards on their behalf.” In the case of the Burmese film that won the Best International Feature award, it was collected by a representative from the Taiwanese consulate. In another case, a losing nominee accepted it on behalf of the woman who beat him. He was one of only two losing nominees even to get any acknowledgement, the other being actress Zoe Telford, who received a “special mention” from the main jury, headed by the Israeli director Amos Gitai, for her performance in Greyhawk. The main juries were as absent as most of the winners. Rather than turn up to announce their decisions, most of the winners were revealed through previously recorded videos that were shown on the big screen. Much of the spontaneity of the ceremony was squeezed out of the event with the revelation that the winners had been told in advance, because they’d not only prepared coherent speeches, but had formal quotes in the press release handed out immediately after the event. An effort to make the awards feel more worthy, by including a number of awards specifically to recognise female directors felt surplus to requirements, as most of the winners were women anyway, but the event was afforded a degree of poignancy by the recent jailing, in Egypt, of three journalists working for Al Jazeera, who’d sponsored the documentary prize. Passionate and earnest as the participants were, with most of the winners being either film students or debutante directors, the ceremony felt more like the end of year awards at a film school than a festival with ambitions to challenge its bigger brothers around the world. And most frustratingly, for a journalist covering the event, what’s likely to be the most prominent prize at the festival, the Audience Award, isn’t announced until Sunday.

I managed to catch not the closing movie premiere itself but the press screening. Co-written by, co-directed by and starring Simon Helberg from TV’s Big Bang Theory and having been chosen by respected programmers to close the entire festival, I had big hopes for the supposed romantic comedy We’ll Never Have Paris. A play on a line from a classic film could show either cinema literacy or a desperate attempt to cling onto someone else’s success or crawl into someone else’s limelight. Sadly, it was the latter, with unlikeable characters, unbelievable situations, unbelievable characters and unlikeble situations – and most shamefully, neither any romance nor comedy. Most confusing is why the talented and respected Alfred Molina and Zachary Quinto would have agreed to put their faces to this project. In a festival boasting 124 features, including work from respected, tried and tested directors such as Michel Gondry, Jim Mickle, Eli Roth and Scotsman Gillies Mackinnon, it seems odd that this should have been chosen for such a prominent slot. But if Cannes can open with Grace of Monaco, why shouldn’t Edinburgh close with this painful exercise? Having said that, given the somewhat parochial nature of the awards, it’s perhaps surprising, at least, to find no Scottish connection to the closing film.

One of the key elements of any festival is the chance for industry figures to mingle. Often, the networking can lead to future partnerships – in many senses of the word. The director of the winner of the Best British Film award, Joanna Coates, it emerged at the ceremony, met her co-producer, star – and husband – Daniel Metz, when she screened her previous film at a festival where he was a judge. Tonight’s networking drinks were laid on by the public film-supporting body Creative Scotland and the training organisation Creative Skillset, who, between them, had backed many of the other industry events during the festival. Many of those attending were familiar faces from previous events of the day – for me – but no doubt previous events of the festival for others who were able to spend more time at EIFF 2014. But interestingly, both here and at other events, whether press screenings or industry meetings, most of the accents heard around the Edinburgh International Film Festival appear to be Scottish, unlike the London Film Festival, which feels more cosmopolitan, and Cannes, where you can go nearly two weeks without hearing anyone speaking French.

It’s clearly impossible, or even unfair, to judge an entire festival from one day, so this is certainly not something I’m trying to do here. To the contrary, I hope this article illustrates the range of activities film-lovers can find on just one day of a major festival. Industry events, art-house films, awards, mainstream films and networking are just some of the events that fill festival schedules around the world. But it also illustrates that with most festivals trying to secure as many premieres for their programme as possible, it’s very possible that delegates and enthusiasts will be watching films without any guidance or advice from impartial reviewers, making some of the choices pot luck. You win some, you lose some. But that’s one of the many beauties of film; it might be an often used phrase, but I’ll attribute it to the first person I heard use it, the literary agent Julian Friedman: if everyone liked the same films, the industry would be very boring.

A version of this article previously appeared on UK Screen