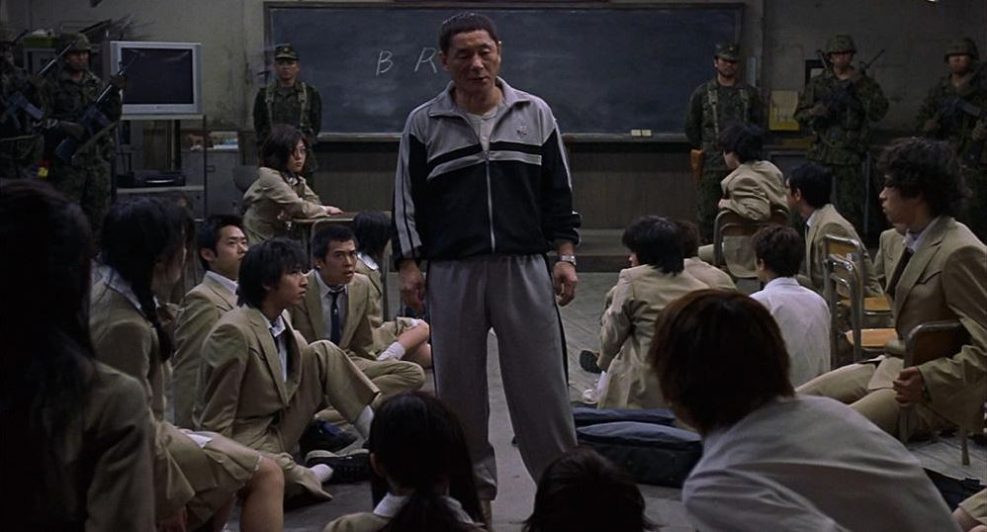 Recent films such as “Hana-Bi”, “Ring”, and “Audition” have taken Japanese thriller and horror movies to world-beating heights and “Battle Royale” continues that trend. It’s arguably the most extreme and controversial film of them all – a kind of children’s Survivor, where instead of voting their rivals off the island, they kill them.

Sometime in the near future, anarchy has broken out in Japan. The government has to act. On the way to what a class of 14-year-olds believe is a school trip, they are drugged. When they wake up, in a derelict building on a deserted island, they’re each given enough provisions for three days – and a weapon. Only one of them will be allowed to leave the island alive. And if more than one is still alive after three days, every survivor will be killed.

It’s a battle of wits and survival of the fittest with far higher stakes than the reality TV shows it mirrors. It’s fascinating to see how some children are remorselessly out for themselves, while others group together in the vain hope that they might be able to beat the system. As viewers, we root for the latter, despite the blatant futility of their co-operation.

Contrasted with the paranoia of the contestants is the cool ruthlessness of their big brother-like teacher, played by the leading Japanese auteur and actor, Takeshi ‘Beat’ Kitano.

The odd plot hole doesn’t seem to matter. With more than 40 contestants in the deadly game, this is a heart-stopping action film, teaching us the worthy lessons of discipline, teamwork, and determination, but wrapping them up in a deliberately provocative, shockingly violent package. With children killing each other, this is one foreign language film which is unlikely to secure a Hollywood remake.