My day started with a sobering experience; I found out what it was like to be part of a minority in the film industry. At an event at the Palais, the Swedish Film Institute was leading a panel discussion and presentation about the issue of the under-representation of women in the film industry – and it felt like I was among only a handful of men in the room. It’s a long-running debate that was briefly cast aside by the #OscarsSoWhite campaign but has been brought back into stark relief in the aftermath of the Weinstein scandal that uncovered allegations of powerful Hollywood figures sexually assaulting women – and indeed men. Allowing one campaign to piggy-back on another can be quite dangerous, as it could suggest that the reason so few films are directed by women is because men are sex offenders.

With temperatures and tensions so high, there’s a danger of feminism turning into man-hating. This area of debate is not a safe place for a man, especially not in a conference room full of dozens, if not hundreds of women – in a conference room where I felt, as a journalist, I was standing at the back, watching a campaign rally, with many women whooping or giving standing ovations, rather than an academic exercise or press conference. They were preaching to the converted, baying for the blood of the men lining the back of the hall. The Swedish actress Eva Rose rallied the troops with such calls as “You don’t have to be an arsehole to make great art” – which, catchy an edgy as it is, seems to play into the argument that all men are arseholes. Her assertion that the campaign needs to “target structures rather than individuals” seems to be absolutely true – and perhaps contradicts her earlier rhetoric, catchy as it might have been.

The academic side of the argument was presented by Doctor Stacy L Smith, from the Annenberg Inclusion Initiative at the University of Southern California, who is best known for developing the idea of the Inclusion Rider, a clause in a star’s contract that would require producers to ensure that all areas of society are fairly represented and treated on and off screen. She observed that research has suggested that when people are asked what qualities might be needed to be a director, they suggest mostly masculine attributes, such as leadership. With many world leaders – including Britain’s prime minister, the German Chancellor and the New Zealand prime minister – being women, it could be argued that leadership is not – or should not be seen as – a masculine attribute in the first place. It could be argued that the best way to achieve equality is not to highlight differences, perceived or otherwise. But it could be true that until perceptions of those qualities are changed more widely, there is some merit to her conclusion that this leads to some women being overlooked for directing jobs, while those who do get the jobs come under greater scrutiny than a man would.

With statistics suggesting that the proportion of speaking roles for women in films has not substantially shifted from a third for seventy years, she strongly argues that if there were more female directors, that would automatically lead to more women on screen and more women in key positions in the crew. But does that argument not contradict her wish to decouple the identity of the director from the content, by suggesting that having female directors necessarily enables you to make films about women?

But we are where we are and whether it’s the 82 women marching up the Cannes red carpet in a display of support for greater representation of female directors at the festival or whether it’s Frances McDormand’s clarion call at the Oscars for stars to adopt the Inclusion Rider in their contracts, or simply the profile of the #MeToo and #TimesUp campaigns, it does feel that the momentum is finally going in that direction. But that’s far from enough for Smith. “When it comes to this issue, it’s not about how you feel. It’s about are the numbers moving and are more women getting hired – are more women getting selected at a significant jump than the year previously and until we see those benchmarks realised, in film schools, at film festivals, at the indie level, in studio films and how those films are being talked about in the popular press…until then, it’s about creating and standardising an environment where all talent has the opportunity to rise.

And the figures are certainly very much in the forefront of minds at the Swedish Film Institute. Its head, Anna Serner, told the meeting, “I’m not frightened of quotas.” She said that if there hasn’t been enough progress by 2020, she will ensure that all her organisation’s funding goes to women. 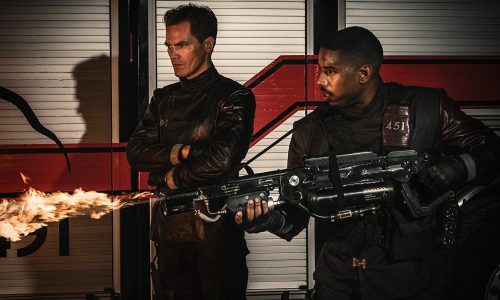 Perhaps fittingly, after such a heavy start to the day, the heavens opened and good old-fashioned English weather descended. So what better place to hide from the downpour than a cinema? Ramin Bahrami’s adaptation of Ray Bradbury’s dystopic novel Fahrenheit 451, features his 99 Homes star Michael Shannon and Black Panther’s Michael B Jordan. It’s an imaginative and dark affair, feeling visually comparable to Blade Runner and with geo-political themes echoing the TV drama The Handmaid’s Tale, with an authoritarian government whose reign of terror extends no further than the Canadian border. What’s particularly disturbing about this world – in which all books must been burnt to ashes – is that the people are largely behind the government in controlling the knowledge of the people – they are content to be ignorant.

Next I took a walk around the market with James Partridge, the founder of New Zealand’s Terror-Fi Film Festival, the genre event now into its second year. It’s being expanded from Wellington to Auckland and it’s being brought forward to coincide – appropriately – with Halloween. He marches around the exhibition centre, seeking posters that look like they would sit comfortably in his schedule and asks to see copies of the film.

Perhaps it was the inclement weather, but the security staff seemed to be unusually polite, friendly and good-humoured today, with one declaring “It’s nice to meet you,” as he scanned my accreditation badge. Inside, where our bags are searched, hand-luggage airport-style, I’ve got well-rehearsed in talking them through the various pockets of my backpack, to try to speed up the process. “My camera is in here, my computer is in there,” I began. “Where are your bombs?” he joked.

The evening’s entertainment came in the form of not one, but two parties. The first was hosted by the BFI as a means of keeping in touch with its partners at home and abroad. This was a chance for the interim Artistic Director of the BFI, Tricia Tuttle, to introduce herself as the main programmer of the London Film Festival, while Clare Stewart is on a sabbatical. With the formalities out of the way, there was a chance to enjoy a finger-buffet while mingling with others in the industry; among others, on this occasion, the BFI’s publicists, a British producer, a score composer moving from documentaries into narratives and Creative England’s Chief Content Officer Solomon Nwabueze.

Next it was off to a typical Hollywood-style party, laid on by a body that should know a thing or two about them – the Hollywood Foreign Press Association, the organisation behind the Golden Globes. In a beach-marquee, well protected from the ongoing drizzle, a DJ played thumping music as some guests danced as entertainment for others who were waiting in line for a drink or for one of the waiters to come round with a tray of nibbles. The wait for real food was long enough that I had to keep popping back to the dessert table, uncomfortable as I am about flipping between sweet and savoury. The queue for drinks could be beaten by accosting a waiter who was prowling around with as many champagne glasses as he could fit between his fingers in one hand and a bottle of Bourgogne champagne in the other so big that they probably don’t yet have one of those fancy names for it. One word of warning for them for next time; huge bottles of bubbly that can fill dozens of glasses take so long to empty that the last few glasses will inevitably be flat. This was not an event where it was easy to meet new people, because the music was so loud that even if you approached someone new, you wouldn’t be able to talk to them anyway. But being the guest of an HFPA member at least meant that I got introduced to some of the people he was speaking to; among them was Joe Penna, the director of Arctic, happily one of the better films I’ve seen at the festival so far. His take of extraordinary survival of a man in the Arctic, it turns out, was originally meant to be set on Mars, but then the Martian came out, so he transferred it to the inhospitable Arctic. I suggest to him that it could easily have been described as “All is Lost on Ice” – his preference, it seems was All is Frost.

The other interesting conversation I ended up having came out of someone seeing me standing by a wall covered in logos, brandishing my large camera. “Could you take a picture of me with my phone,” joked Syrian-born but LA-based director Sam Kadi, thinking it would be funny to ask a professional photographer to use a mobile. As we got chatting it turned out that his most recent film – Syria’s contender for this year’s Best Foreign Language Oscar – was a documentary about an activist whose death prompted a violent uprising. But the story of how Little Gandhi was made was arguably every bit as interesting as the biography itself. The Syrian parts of the film were shot in a city besieged by government troops, by someone Kadi had found online who happened to live in the area and have his own camera. The shoot was directed by Kadi via skype and then he had a six month wait before the footage could be smuggled out of Syria on thumb drives. Having interested me in his story, he agreed to have his photo taken by me against that wall of logos after all, but with my camera, not his phone.