Mention the Oscars and most people think of big-budget, American-backed, box-office-winning blockbusters.

It is almost as if films like Titanic, and this year’s most nominated film Gladiator, were made with the Academy Awards in mind.

But, as if to side-step accusations that Hollywood is too insular, the Academy holds an annual event, the day before the Oscars, to showcase foreign language films.

This is the 19th year that the Foreign Language Film Award Nominees Symposium has been held.

In its first year, only 50 people attended. Now, it fills the 1,000-seater Samuel Goldwyn Theater at the Academy’s Beverly Hills headquarters.

The event begins with excerpts from the five nominated films – whittled down from entries from 46 countries, by members of the Academy’s Foreign Language Film Award Executive Committee.

First came Amores Perros, representing Mexico. It tells the intertwined stories of three sets of characters in Mexico City, whose lives are brought together by a prize-fighting dog and a car crash. 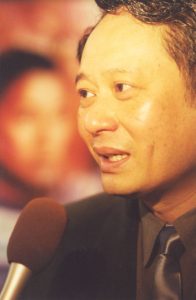 This clip brought cheers from the audience, as did the last two winners at previous symposiums, Life Is Beautiful and All About My Mother.

The Czech Film, Divided We Fall, is about a Czech couple during World War II, who hide a Jewish concentration camp escapee.

Next was Belgium’s Flemish-language entry, Everybody Famous – a comedy about a factory worker who kidnaps a pop star in the hope of helping his daughter’s singing career.

The final nominee was from France – the most honoured country in this category – called A Taste of Others.

The comedy of culture clashes tells the story of a wealthy businessman with no understanding of the arts, who falls for a struggling theatrical actress and her artistic know-it-all friends.

The Oscar-winning producer of Rain Man, Mark Johnson chaired the symposium. He said the originality, resourcefulness and inventiveness of these films was truly staggering.

For the next hour and a half, the directors discussed all aspects of their films.

Speaking through a translator, the Czech Republic’s director, Jan Hrebejk, explained that it had taken him five years to get his film made.

Former DJ, Alejandro González Iñárritu, from Mexico, took just three, but needed 36 re-writes before he was happy with the script.

Lee said his motivation for making a poetic martial arts film was to fulfill a childhood fantasy.

Belgium’s Dominique Derruddere said he had wanted to convey the fact that in such a small country, almost anyone can become famous.

And Agnes Jaoui, who wrote and starred in the French entry, explained that she and her husband – co-star Jean-Pierre Bacri – had set out to write a thriller.

After two months, they gave up, but used the same characters in a cultural comedy.

Next, they discussed their relationships with their writers. Hrebejk had been working with his for 18 years.

This suited him, he said, because he found writing boring, while his partner was afraid of people.

Lee too said he didn’t like writing. He asked a friend to turn one of his favourite books into a screenplay, because his writing and producing partner James Schamus, he joked, “doesn’t read novels”.

Iñárritu said the writer had to be disciplined, allowing him to be more intuitive and instinctive.

The French, Belgian and Czech directors were agreed that they liked to work with actors they knew, to make them feel confident and create a relaxed atmosphere on set.

Inarritu chose to work with first time actors so that he could learn his new art alongside them.

He saw the characters as extensions of the actors, and got them to live in character beforehand, to get used to the part.

Lee described his relationship with actors as very much love-hate, saying that he often found them to be obstacles.

He likened them to children. “Make them do their best and slap them if necessary,” he said.

“But sometimes, even if you beat them to death, you still can’t get what you want.”

Johnson brought the symposium to a close with the unusually positive news that already, all five nominated films had secured distribution.

A version of this article previously appeared on the BBC News website.