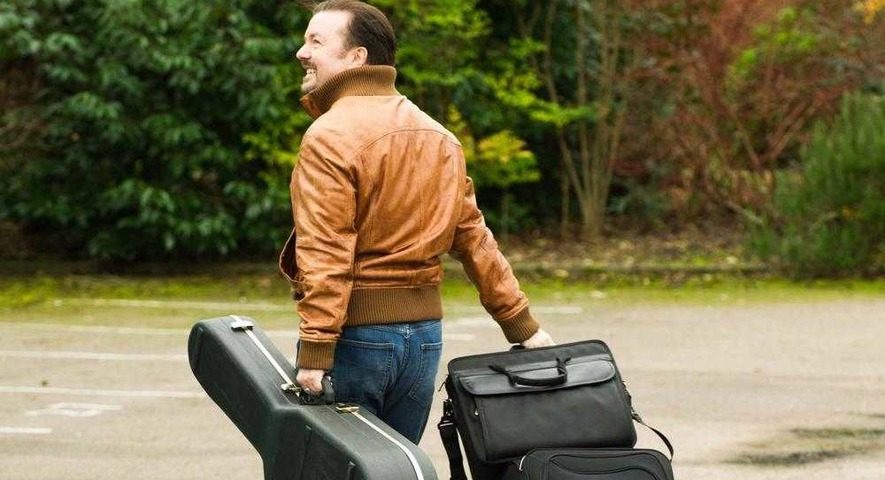 He’s now working as a sales rep, driving up and down the M4 corridor, shifting cleaning and personal hygiene products. But the day job is just filling time until he makes it as a rock star.

When viewers catch up with him, he’s about to take three weeks off to go on tour with his band, in the hope of getting his big break in the music industry.

Cashing in his pensions, he’s prepared to give it his all – with the best musicians, engineers, tour bus and hotels he can afford. Sadly for David, the same can’t be said of the venues, as the crew turns up to a succession of dingy pubs and student unions bars.

As the tour goes on, disquiet erupts from his team and only young rapper Dom (Ben Bailey Smith – apparently known in the music industry as Doc Brown) shows the loyalty he’d been hoping for; how is he going to win the adoration of the world if he can’t even retain the support of his backing musicians?

OK – let’s start with the top line. To be fair, if you like David Brent’s earlier outings in the office – and Ricky Gervais’s subsequent efforts to push the comedy boundaries – there will be much for you to enjoy here; more of Brent’s direct-to-camera banter, his uncanny knack of making his efforts to be inclusive seem shockingly offensive, his continual drive for public adoration at the expense of private appreciation.

There are a lot of laughs, but it’s sometimes tough to work out whether you’re laughing at or with the film – perhaps you’re laughing at David Brent with Ricky Gervais – which might be clever, but it’s certainly confusing. And it feels too much like more of the same than any real effort to develop the character in the world we already know.

It’s a bold departure for Gervais to take a well-known and much-loved (if derided) character and embed him in a new environment – one hinted at during his earlier incarnation. But it’s perhaps a departure too far to be doing it alone – without the guiding hand of his former collaborator Stephen Merchant, or indeed any of the other familiar faces from The Office. It feels too much like a one-man show.

David Brent: Life on the Road begins in the same mockumentary-style as The Office – indeed, after a brief introduction to his music, it begins in an office – but David Brent is no longer the boss. We meet a whole new set of colleagues – such as the office bully, a sympathetic receptionist, an inexplicably sycophantic woman from accounts, a politically correct HR officer and an office clown (Tom Bennett) who plays along with Brent’s “comedy” antics.

But as the narrative takes the protagonist on the road, we hardly see any of these characters again – after taking time to introduce a new set of colleagues, they’re brushed aside, as if with the cleaning utensils they’re trying to sell.

Having introduced too many characters who have no bearing on the plot, then another set who are completely dependent on the plot, we – as viewers – are asked to believe that none of his colleagues – new or old – appear to be interested to see his band in concert. Think about it – if one of your colleagues took time off work to gig with his band, whether you like him or even hate him, wouldn’t you at least be interested to know how it goes? This plot happens in a bubble – with almost no mention of anyone at work once he sets foot out of the door and not so much of a reference to any of his former colleagues from Wernham Hogg down the road – which is particularly odd, since the earlier TV show itself is referenced.

You could almost get the impression, as Gervais peppers his cast with a handful of familiar faces from other shows, such as W1A, but none of his own, that the others might have said “We’ll do it if Stephen does it.”

Perhaps one thing that Merchant brought to their collaborations was a sense of story-telling structure and discipline, that included filling out the supporting characters, rather than concentrating so strongly on just one.

It’s a familiar tale about a man who craves acceptance – or more accurately, a man who wants to be accepted – and adored – by everyone. There are people he encounters who do accept, even adore him, but they’re the ones he treats badly – climbs over to try to get everyone else to like him. And it’s never quite clear why the few people who like him from the start stick with him – or why the people who wish him well and could help him – don’t.

David Brent: Life on the Road is about life on a very straight road, with no twists and turns. You can see the end from the start, so you know exactly where it’s going at every point. There are a handful of decent gags – and some observations so profound that you’ll stop yourself shaking your head in embarrassment when you realise you actually agree with many of Brent’s points – even if you think they’re delivered with a naive bluntness. But it takes more than a string of good gags to make a satisfactory film script.

Each gig on the tour is essentially an opportunity to showcase another song – each one a slightly different version of the same joke. It’s a good joke, but it feels repetitive when we just get the same thing again and again. Furthermore, while the music he believes is going to make him his fortune has its moments, it’s no Spinal Tap; in both cases, the artists believe their work to be profound as they deliver the songs without irony, but with Spinal Tap, there is a consistency to the music – here, Brent tries out different genres – just because that’s what the next joke requires. And many people will already be familiar with one of the best songs/gags in the film, because it’s unchanged since he – and Doc Brown – performed it for Comic Relief in 2013.

Brent really does seem to have reached the end of the road. Gervais has milked about as much as he’ll ever be able to milk out of this hapless character, remaining faithful to one of TV’s great grotesques, while surrounding him in both empathy and pity. He’s by turns controversial, enlightening, profound and pathetic, making the film funnier than some detractors might have expected.

But it’s not film-making. Perhaps it could’ve held its own as a TV special, but on the big screen, the plot needs to be more complex, the supporting characters need to be better used and the protagonist needs to go on a more logical journey.