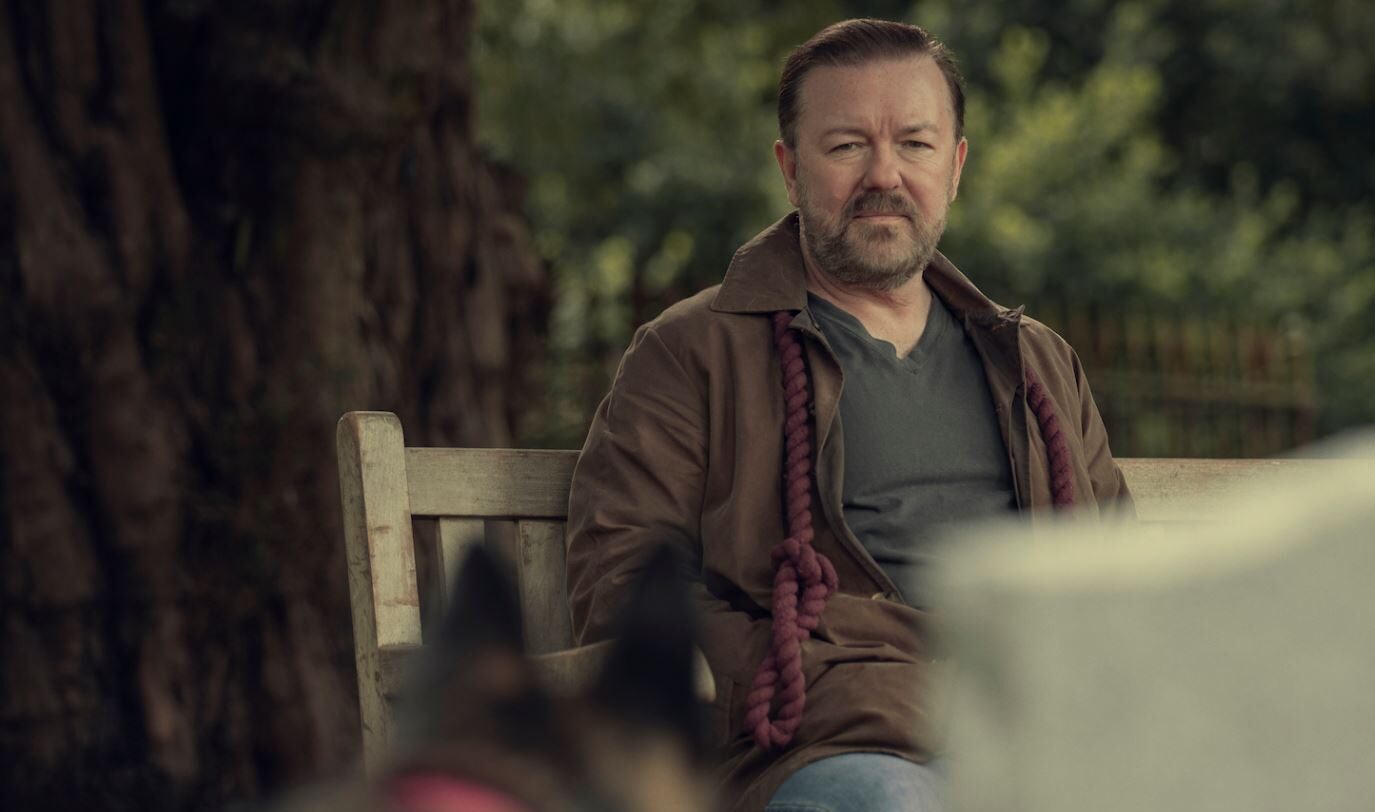 At night, he sits at home alone; all he has left to keep him company are their dog, the many videos they took of each other and the messages she recorded for him as she was dying.

By day, he works as a journalist for the local paper, edited by Lisa’s brother Matt (Tom Basden).

The sympathy from his colleagues and empathy from Matt don’t make his grief any easier to bear. Only Anne (Penelope Wilton), whose late husband is buried close to Lisa, provides any solace as they sit on a nearby bench and discuss life, death and their loved ones.

Many of those he interviews – alongside his photographer Lenny (Tony Way) – bring back memories of Lisa.

His grief and his loneliness have turned a kind and gentle man into a depressed nihilist who those who don’t know him could regard as a cantankerous, verbal bully. But deep down, there’s a caring, honourable and supportive friend desperately trying to escape.

Unusually for Ricky Gervais, who’s previously brought The Office, Extras, Life’s Too Short and Derek to our screens, he’s taken After Life to a third – and he claims final – series.

Over eighteen episodes, he’s developed the character of Tony’s widower from a self-pitying sociopath, with little prospect of redemption, to a more sympathetic – although no less lovelorn – central character.

Many of his previous protagonists have been grotesques, wannabes, figures of fun – but Tony is a regular guy – trying to deal with a personal tragedy. And while much of what he does and says could be compared to the irascibility, frustration and narcissism Larry David’s version of himself in Curb Your Enthusiasm, you can usually understand where he’s coming from, allowing dark humour to seep out of his despair.

Season one was Ricky Gervais firing on all cylinders – tackling a tough subject with subtlety, gentle wit and a little wickedness, using videos of Lisa to fill in the back-story, balancing his pain and frustration with his cantankerous selfishness. He’s not presented as a nice man, but deep down, you can see his humanity, waiting to re-emerge from his grief. The anger and brutishness is modified by thoughtful musings with the only other person to know how he truly feels.

Season two felt like a bit of a backward step – there was much of the same, but we’d had that and didn’t need more, making it feel a little tired, even lazy. When he tried to be different, it was by pushing boundaries a little more, which served to remove the narrative further from a reality we could empathise with.

Season Three begins slowly, with two episodes that would have been at home in Season Two, but suddenly, Gervais manages to pick up the pace again. The next three episodes shone above even those from Season One, being wickedly fun, without compromising the character’s arc. Once you get to the third series, if viewers are still with you, they’ll know the characters well enough that you can start taking liberties.

The final episode though is a little arch – as it aims to tie up all the lose ends, both for Tony and those closest to him – as he goes on a Scrooge-like journey of redemption. Gervais manages to draw tears, without feeling too manipulative or mawkish and he has some interesting and enlightening things to say about bereavement and empathy.

Many of the supporting characters stay with Tony for all three seasons, with a couple disappearing along the way and a handful of new ones joining the journey. They’re a slightly rag-tag bunch of eccentrics and blank sheets – some more outlandish than Tony and others more grounded in reality. There are no antagonists, though, other than bereavement itself.

It’s hard to pigeon-hole After Life, as Gervais leaves the broad comedy of his earlier shows behind him, but while the narrative is driven by tragedy and redemption, it’s still underpinned by the kind of humour you have to find in life to make it worth living.

But often it’s the attempts at comedy that let it down, feeling a little uneven at times, while it’s at its best, contemplating the meaning of life. Much of the time is spent following Tony at work, but the journalism never feels real and it often feels that rather than being a satirical look at local papers, it’s poking fun at the very people the show really wants to help.

After Life is a peculiar concoction for a TV series; a show about death – and life – that strives to impart warmth, kindness and hope – although it often disguises them well.