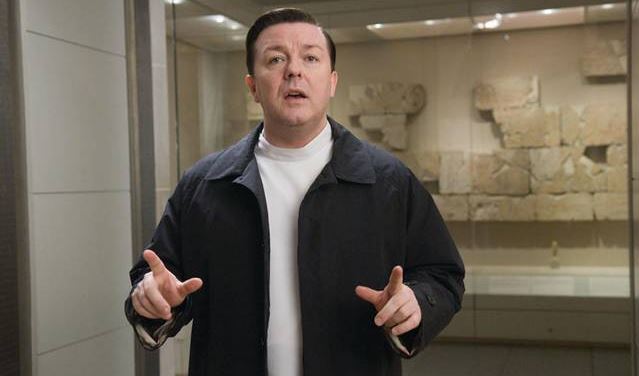 Bertram Pincus (Ricky Gervais) is a cantankerous British dentist, who’s set up a practice in Manhattan.

He lives alone in a plush apartment building where the only person he ever acknowledges is the doorman – unless you count hurriedly closing the lift door when you see a neighbour approaching acknowledging them.

After a brief stay in hospital, he starts getting an odd reaction from some of the people around him – including smooth and smarmy lawyer Frank (Greg Kinnear) – who died during a recent encounter with a bus.

It turns out that a near-death-experience on the operating table has given Bertram the unique – and unwelcome – ability to communicate with the dead – hell, he doesn’t even like communicating with the living.

As ghost after ghosts finds out that a line of communication to the living has just reopened, he finds himself haunted by more and more lost souls, begging him to resolve their earthly issues, to allow them to rest in peace.

In the case of the philandering Frank, he wants to try to stop his beautiful wife Gwen (Téa Leoni) marrying a smooth and worthy civil rights lawyer.

Oh – and just to tie all the elements together, Gwen is the neighbour who keeps finding doors slamming in her face, any time she finds herself anywhere near Bertram.

But this – and everything else in Bertram’s life – is about to change.

We’ve seen films about ghosts, hovering because of resolved issues.

We’ve seen films about cantankerous gits being motivated to change their ways.

But oddly, despite the fact that there’s little new here, it still manages to feel fresh, with some neat twists and idiosyncrasies that make it stand out from the crowd.

I wouldn’t say it’s the best of the genre, but it certainly holds its own in a crowded field and in a year of largely disappointing comedies, it’s certainly among the more enjoyable ones.

A few nice directorial touches – such as the physical reaction to the living unknowingly interacting with the dead – and a subtle twist on the real reason that the ghosts are hanging around – are among the satisfying elements to this film.

Storywise, it is rather predictable – even down to a “race against time” dash – but if you just regard it as a bitter-sweet rom-com, you can forgive such formulaic nods.

In truth, it’s the performance of Ricky Gervais – his first big screen lead – that makes it worth the cinema ticket.

Fans will understand how, as paradoxical as it seems, one of the most misanthropic characters in modern cinema actually comes off oddly endearing.

For anyone familiar with Extras’ Andy Millman, you’ll get a similar feel from Bertram Pincus, but clearly in a totally different environment.

I’m not sure how many more films he’ll be able to get away with doing, essentially playing another tweaked version of his own persona – he hasn’t, in his body of work, convinced anyone that he’s a talented actor with a broad range of styles, but he certainly comes off a winner here. For his first top-billed outing, he gets the benefit of the doubt.

I guess his looks (not that I can talk!) as much as anything else will be his get-out-of-jail-free card here – it’s not like he’d be expecting to take over from Daniel Craig anytime soon, anyway.

Any doubts and questions will be answered in the future; will he find other similar characters to play, is he genuinely a talented and versatile actor who’ll be able to surprise us by switching effortlessly between hyper-real comedies and dark dramas, or will he end up where he claims he wants to be anyway – retiring behind the camera?