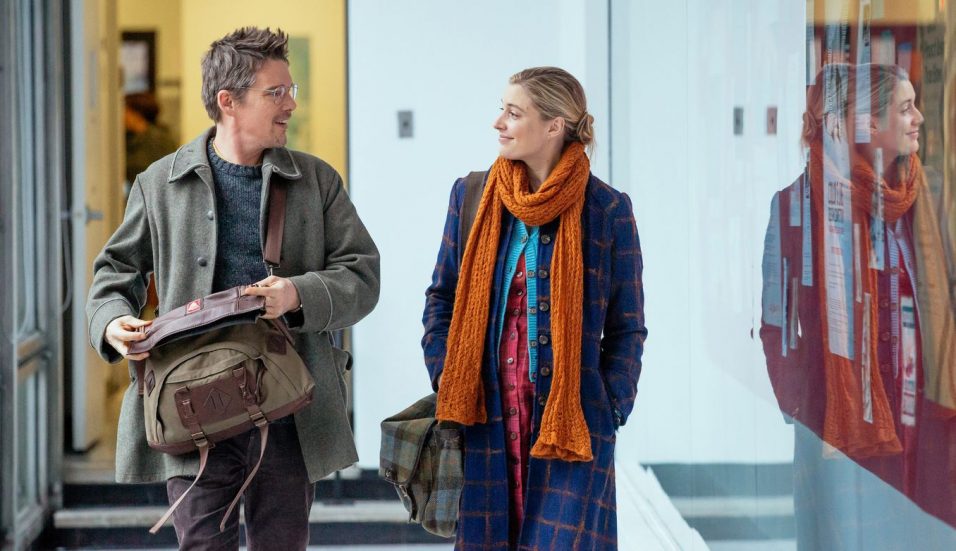 English teacher Maggie (Greta Gerwig) has long since given up on finding true love and is planning to use a sperm donor to have a baby on her own. She’s even gone so far as to select a former college friend as her donor.

But a mix-up over a pay-slip leads to an encounter with part-time anthropology lecturer John (Ethan Hawke) and the chemistry is instant.

Over the days that follow, they spend more time together, discussing everything from their attitudes to life to the book he’s writing – and soon Maggie’s plan of choosing single motherhood is thrown into disarray.

The situation is complicated by the fact that John is married to Georgette (Julianne Moore), a respected professor at Columbia University, who firmly rules the roost – at home as at work.

But his marriage doesn’t get in the way of John’s plan – and soon he’s married to Maggie instead. But when that doesn’t work out, Maggie comes up with a new plan – to relieve her guilt at breaking up his previous marriage.

Rebecca Miller’s film – based on her friend’s unpublished novel – has variously been described as comparable to Woody Allen’s New York talky classics or a screwball comedy.

Some of Allen’s early works indeed ticked both boxes – but in truth, Maggie’s Plan ticks neither, being a supposed rom-com that’s far more bitter than sweet.

Of the three main characters, we’re clearly meant to identify with Greta Gerwig’s ditsy Maggie, but she’s neither Woody Allen nor Diane Keaton and her decisions are by turns naive, selfish or simply unbelievable.

Ethan Hawke’s John is the most likeable and real until the story forces him to change beyond recognition, in order to precipitate Maggie’s second plan.

The dialogue is sub-Allen, the comedy – such as it is – certainly isn’t screwball. It takes more than Moore’s funny accent or Gerwig’s frumpy outfits to make me laugh – much of the supposed humour comes from such mindless moments as providing a sperm sample or belittling the good-looking, healthy loser.

The most believable, likeable and humorous characters are Bill Hader and Maya Rudolph as Maggie’s unhappily-but-pragmatically married best friends-cum-exasperated-sounding-boards, who serve largely as expositional devices, or perhaps as Maggie’s conscience, but – in truth – are far enough removed from the plot that they could be removed from the film altogether without changing its destination.

It’s not the destination you would have been expecting at the outset, which at least makes it a more welcome diversion than some films to come out of the US, but having the ambition to be fresh requires more than incoherent quirkiness and familiar observations delivered with a slight twist by often inappropriate actors.