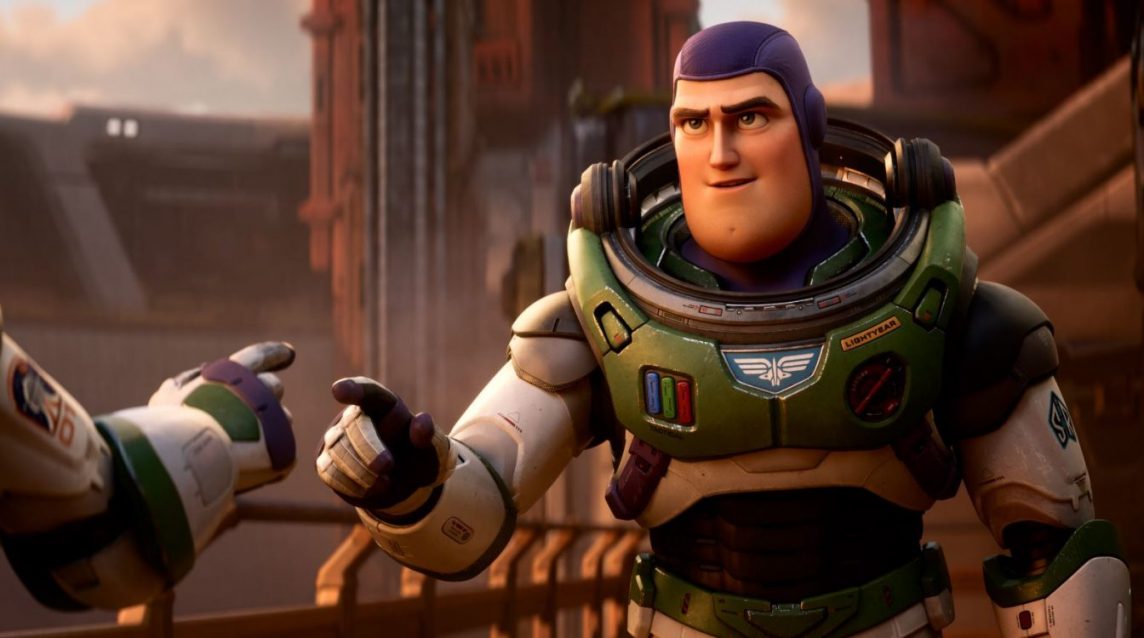 When Space Ranger Buzz Lightyear (Chris Evans) makes a mistake at the wheel, his spacecraft – and everyone on board – are stranded on a distant planet. With their fuel source destroyed, there’s no way to get home.

His boss, Commander Hawthorne (Uzo Aduba), assigns Buzz the job of testing new types of fuel to see if he can generate enough speed to get everyone back to Earth.

But each time he tries – and fails – he’s travelled so fast that by the time he returns to the planet, a few years have passed (a quick relativity lesson, there); the world is moving on but he’s being left behind.

By the time he cracks it and finds a way to get home, many of his friends have long since died and those who are now in charge have other ideas.

A caption at the start tells us that this is the film that spawned the action figure that was given to a little boy called Andy in the 1995 Pixar hit Toy Story. It’s a cute way to give a fresh take on a movie spin-off, becoming a prequel, of sorts, to one of the best loved franchises in modern cinema.

For anyone who remembers Tim Allen’s Buzz Lightyear, Chris Evans’ version is – anachronistically – the original. In this film, the character says his famous catch-phrase “To Infinity…and Beyond!” but that’s kind of where the similarities end. He’s not the alpha-male hero, lacking in self-awareness – he’s a diligent Space Ranger, devoted to his boss – his female, boss – his lesbian boss.

That’s been the source of much talk about this film – during a montage as we see the years passing, we have glimpses of Captain Hawthorne becoming engaged to her female partner, kissing her and being pregnant. Disney originally removed the kiss but replaced it after protests from its own staff – but now at least 14 countries in the Middle East and Asia have banned the film and Singapore says only people over 16 can see it – only people over 16 can see an animated adventure aimed at children.

Whether it’s just Disney cocking a snook at the conservative establishments – around the world and back home in its own state of Florida – or whether the studio genuinely feels this is a message that the world needs to see, again, one might question whether this is the right vehicle; does the famed family-friendly studio really want the main talking point about one of the highest profile children’s films of the year to be a same-sex kiss? It can afford to take a hit in global box office earnings, perhaps, but this isn’t the first time this has happened and almost certainly won’t be the last. So a main character is gay. Fine. But it’s the only relationship we see in the whole film. And they don’t just leave it at that; young viewers might well ask their parents how two women, stranded on a distant planet, were able to conceive. Did this story need to go there?

This is a film about Buzz Lightyear, after all. An action adventure, which ultimately involves the central character and a rag-tag bag of associates – including Hawthorne’s grand-daughter, Taika Waititi’s humorous budding Space Ranger and a robotic cat – battling swarms of evil robots, following the orders of their leader Zurg, who you might remember being referred to in Toy Story.

While this is a space adventure that works on its own, not particularly original terms, it’s not really aimed at the same audience as the Toy Story films – and there, perhaps, lies part of the problem with the controversy referred to above. It will attract audiences expecting the bright and colourful, cheery characters that have been teaching generations of children around the world about growing up – but from the tone and complexity of the narrative – whether it’s Einstein’s theories of relativity, same sex relationships or ex-cons who are banned from carrying weapons – it’s clearly targeting an older demographic, so it doesn’t really feel like an authentic precursor to the franchise that made the name famous.

There is a cute robotic cat – but other than him, there’s little of the warmth and humour you’d expect from a Pixar film. It’s a perfectly serviceable space adventure, but lacking Pixar’s typical depth and reaching out to an unexpected demographic. Is this really the film that would have got 6 year old Andy from Toy Story so excited about this character that he would have lost interest in his cuddly cowboy? I guess a film about a Space Ranger destroying robots probably would excite a 6 year old – although everything else would have been way over Andy’s head. I guess the main message of this story, then, is about the power of merchandising.