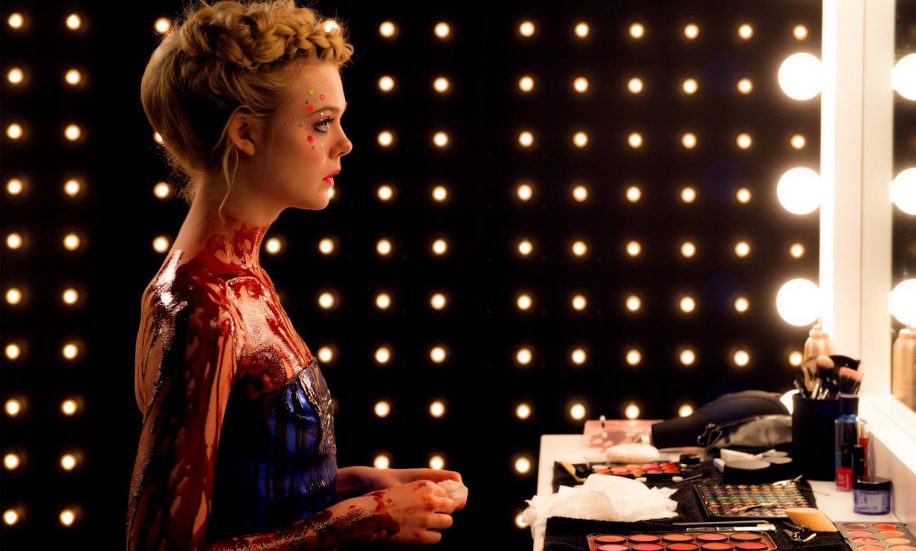 Young model Jesse (Elle Fanning) is just sixteen when she arrives in LA to try to make.

Naive from the outset, her simple beauty finds her an agent who gets her jobs that other, more experienced models can only dream of. Her make-up artist friend (Jena Malone) has her own axe to grind.

In this ruthless world of LA fashion, everyone is prepared to do whatever it takes to get what they want, to get who they want and to achieve what they need.

Jealousy, violence, necrophilia and cannibalism are only some of the themes that permeate the ruthless modelling underworld in Nicolas Winding Refn’s evisceration of the fashion industry.

Danish wunderkind Refn has had a varied but always noteworthy career. Early films such as Tom Hardy’s eponymous biopic Bronson showed him to be a fearless director who is keen to amplify the most frightening aspects of reality for artistic effect.

His most successful film – both commercially and critically – has been Drive, both because of its high-profile cast and because it bowed more to the mainstream than Refn tends to lean.

Having reached wider audiences, his follow up, Only God Forgives, was eagerly awaited but found the director firmly back in the art-house world from which he rose, seeking to shock and provide viewers with something to experience and talk about rather than something to enjoy.

The question, then, is whether The Neon Demon is more Drive or More Only God Forgives.

On one level, it’s a simplistic and not entirely convincing narrative with an unnecessarily blood-thirsty outlook.

But taking a step back, you realise that it works as a shocking and frightening but believable satire on the fashion industry.

As well as the actors do with the material, they’re largely pawns in Refn’s game.

The Neon Demon is arch, but unlike Only God Forgives, knowingly so – and it treads a precarious path just the right side of pretentious – until the final scene pushes it just a little too far back towards shocking for shocking’s sake.

But more than the workmanlike plot and the darkly satirical subtext, from the locations and costumes to the make-up and score, it’s the spectacular visuals and sound-track of The Neon Demon that are the most striking.

Its execution is certainly original and the electronic soundtrack is befitting of the neon-infused imagery, but with outfits as extreme as the some of the directors flair and tricks, this feels more like a colourful work of art by a film student (or deliberately provocative director) than a conventional story from a film-maker whose primary intention is to comment on life.