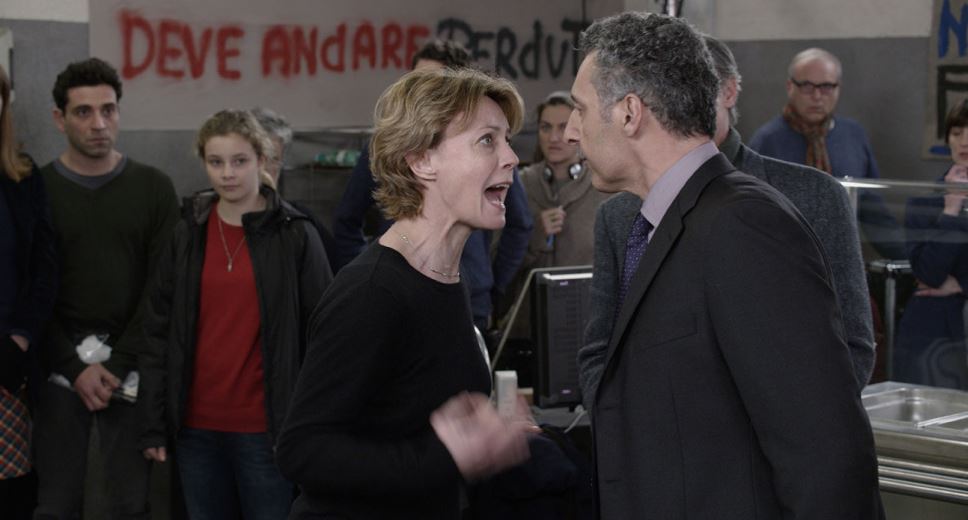 She’s making a large-scale film about industrial unrest with an unreliable American star Barry Huggins (John Turturro), who can’t speak Italian – although his inability to remember any of his lines at all renders that almost academic anyway.

But against this background, she’s having to come to terms with the inevitable and impending death of her frail mother, who’s in hospital and won’t be coming out.

Her brother Giovanni (Nanni Moretti) is her main source of emotional and practical support, but he can’t fix all her problems.

One of Italy’s most prolific and acclaimed directors, Moretti often stars in his films and this is among his most autobiographical explorations to date.

This film – about a director caring for an ailing mother – was made soon after the death of his own mother, but he distances himself from the experience by casting himself not as the director, but her brother.

With death an inevitability, many of the themes addressed here are likely to be faced by anyone who outlives their parents but, in the end, there’s little that anyone can do about it. Similarly, that there’s never really a good time for your mother to die is a truism that doesn’t make for particularly surprising drama.

But Moretti’s portrayals of the difficulties faced by his protagonist, interlaced with an imaginative way of journeying back through appropriate moments from her past, makes for a warm and honest analysis of his own recent situation.

The personal drama is somewhat more effective than the professional one, as the making of the film-within-a-film seems clunky, from the casting of an inappropriate actor and the general managing of the crew to the way it tries to take a step or two back to reflect criticism of modern-day big business cost-cutting and austerity.

Moretti is often described as the Italian Woody Allen and while he is clearly trying to soften the drama with an injection of humour – chiefly around John Turturro’s character – it generally falls disappointingly flat.