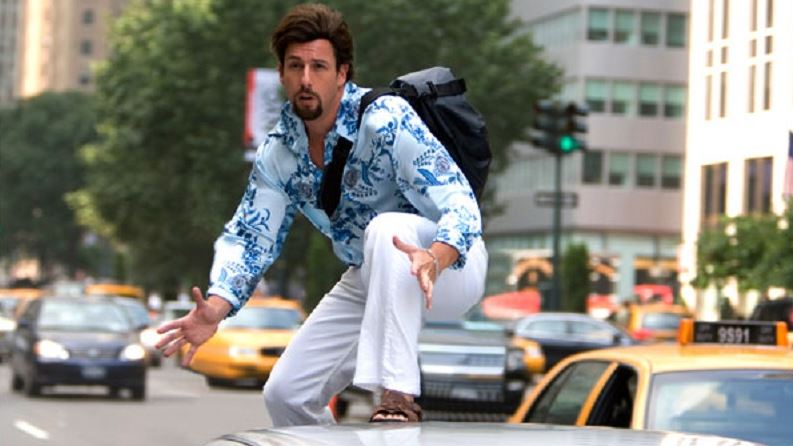 Here we go – Zohan (Adam Sandler) is a top secret agent for Mossad – respected by Israelis, feared by Palestinian militants.

He can pretty much keep Hamas and Islamic Jihad at bay with one hand, while he uses the other to barbecue the fish he’s just caught, barehanded, in the sea.

But he’s not happy being a hero – he wants a quiet life – as a hair stylist in New York, obviously.

So, after faking his death in a fight with his Palestinian nemesis, the Phantom (John Turturro), he turns up in the Big Apple to start his new life.

He soon moves up from hair-washer to hair-dresser, working for a – you guessed it – beautiful Arab girl, Dalia (Emmanuelle Chriqui). But it’s the older customers he charms the most, taking them into the back-room for the kind of special service last handed out to elderly ladies in The Producers.

All is going well until a Hamas fighter recognises him and once the word gets out, his new life is put in jeopardy.

This film is such a peculiar blend of surreal, gross-out comedy and Middle East politics that it’s not entirely clear whether the film-makers are brave, bold, ignorant of the strong feelings in the region or simply insane.

There’s an argument that if you offend everyone equally, you’ll probably get away with it, and they certainly have a go at ribbing both sides – but in an ongoing conflict as tense as the Israel-Palestine situation, making fun of either side is potentially asking for trouble.

But while Israelis have been flocking to the film – a distributor there has said Israelis like to laugh at themselves – most Arab states have banned it. Whether it’s because the film’s preposterous political sympathies fall down on the western side of the Green Line or whether Arab states are simply less keen on self-deprecation is for the impartial observers to decide, but those same impartial observers might find it refreshing that someone should attempt to mock the hatred in the region, in an attempt to lighten the mood and make everyone realise that we should all just pat each other on the back and get along.

Maybe this seems a little naïve – perhaps it’s a bit too early to make jokes about bitter rivals who’d happily kill each other at the first sign that their own lives are under threat.

The biggest problem for the film though is that it’s simply not funny enough – if the jokes worked, its courage could be praised through gritted teeth as if it were uncovering uncomfortable truths, much as the best political satires do, but the humour is so broad and childish that no message can be taken seriously.

Peopled by the likes of Adam Sandler and Rob Schneider, you’d hardly expect anything intelligent and it feels like a Saturday Night Live sketch that’s been stretched for nearly two hours.

Littered with toilet humour, comedy wigs and simplistic gags about sex and sexuality, it’s clearly going for the “so bizarre, you have to laugh” ethos – but that’s the comedy equivalent of using door bangs and thunder claps in horror films. It’s not big – and it’s certainly not clever.