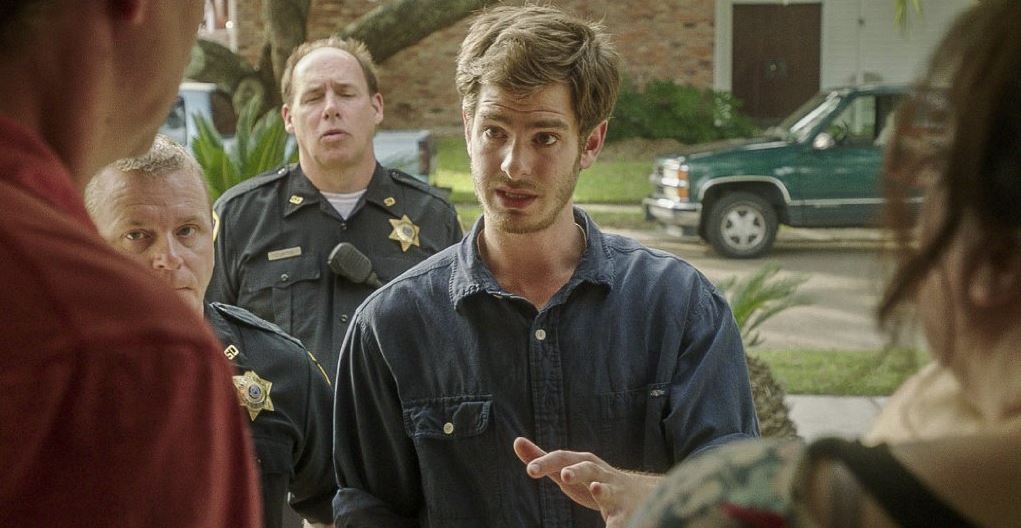 General builder Dennis (Andrew Garfield) lives with his mother Lynn (Laura Dern) and his son Connor (Noah Lomax) in their modest Florida home – until they’re evicted, when paperwork about a late mortgage payment doesn’t reach the court in time.

A local estate agent, Rick Carver (Michael Shannon), repossesses the house on the bank’s behalf, as the family moves into a local motel room.

When Dennis realises that Carver’s men stole his tools while they were throwing him out of the house, he fearlessly turns up at the office to demand them back. Carver’s too busy to speak to him, because his workers are refusing to deal with a problem at another one of the many properties in his portfolio.

Destitute and desperate to get his house back, Dennis steps up to the plate and agrees to fix the problem and before long, he becomes Carver’s right hand man.

Swallowing his pride, for the first time in his life, Dennis can see the prospect of a comfortable future for him and his family. But his actions don’t go down so well with his mother – or Carver’s other victims.

99 Homes is a moral tale for our age, as we follow the little man who signs a pact with the devil for his own future.

On one level, however ruthless Carver and his team appear to be, there is a real sense that people can’t just take out mortgages, stop paying and expect to be able to keep their homes anyway. Banks aren’t charities.

There’s also a sense in which some people might praise Dennis as a self-starter who uses his skills – both personal and professional – to secure the best future he can for his family – who wouldn’t do everything they could for their mother and child? Is it your duty to support your family? Is it selfish to do so at the expense of others? Isn’t that just evolution?

But bad as he feels for the fellow little men he’s helping the middle man trample on, it’s only when Dennis realises that Carver isn’t quite as upfront with the facts as he’d thought that his loyalty is truly challenged.

The film is an interesting exploration of how far one would go down an uncomfortable path before your conscience pulls you back and while Hollywood tradition dictates that viewers are meant to sympathise with the protagonist, at the tale end of a recession, many might find it difficult. But others might respect the get-up-and-go of Garfield’s character, as he takes action that others in his position can’t, or won’t, to help his family at all costs.

Garfield skilfully balances the two sides of his quandary, while Shannon is at his smarmy, but no-nonsense best and firm as he is, there will be those who agree that – to a point – he is in the right, if he’s not as diplomatic about it as his victims might like; but how can you repossess someone’s house in a friendly fashion?

99 Homes tackles some provocative themes but too many of the characters are presented as simply black or white, the film feels too intimate to belong on the big screen and once the narrative starts twisting towards its denouement, it becomes somewhat contrived, morphing from a thought-provoking drama into a crime thriller.

It would perhaps have been clearer and more powerful if elements of corruption that seep in towards the end hadn’t got in the way of the moral ambiguity that had challenged audiences until that point.