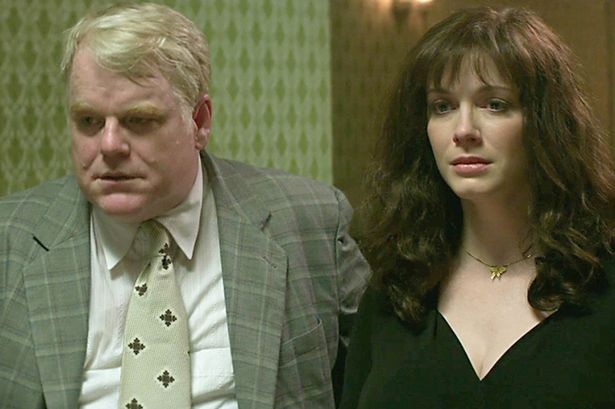 Small-time gangsters abound and pretty much everyone owes everyone else something. Yet the residents are fiercely proud of their roots.

There are very few outsiders welcomed into the fold, but struggling butcher Mickey (Philip Seymour Hoffman) has largely been accepted, after marrying a local. But along with the gorgeous Jeanie (Christina Hendricks) came her racist, pill-popping, flick-knife-wielding, lazy, twenty-something loser of a son Leon (Caleb Landry Jones).

Leon is the kind of guy who’s often getting into trouble at the stone-yard where he’s a day labourer, but one fight too many ends up with a metal bar on the back of his head and Leon lying in a coffin.

To protect the guy on the other end of the metal bar, the boss tells the police the death was an accident, but Jeanie doesn’t believe it and she sets out to uncover the truth behind her son’s death.

Soon, all the men in town – from Mickey to his small-time partner-in-crime Bird (John Turturro), the gang boss they owe money to, Sal (Domenick Lombardozzi) and the fading local newspaper columnist Richard (Richard Jenkins) – are trying to help Jeanie get to the bottom of what happened.

Christina Hendricks is still known to many as the buxom secretary Joan from TV’s Mad Men. Her on-screen boss, Roger Sterling, is played by John Slattery, who here finds himself on the other side of the camera, directing his first feature film, this adaptation of The Paperboy author Pete Dexter’s novel of the same name.

But rather than Slattery’s first outing as a film director or Hendricks’s somewhat incongruous appearance among the middle-aged, working-class low-lives, God’s Pocket is most interesting as one of the final performances of Philip Seymour Hoffman, the highly acclaimed actor who died of a drugs overdose at his apartment in Manhattan in February this year, at the age of just 46.

Happily, Hoffman is on typically fine form as the nebbish at the heart of this story – a butcher with debts up to his eyeballs, who’s gambled on taking on the least desirable step-son in order to bag one of the most desirable wives, marrying well above his not inconsiderable weight.

From John Turturro’s florist-cum-thief to Richard Jenkins’s alcoholic has-been and Eddie Marsan’s undertaker and Peter Gerety’s bar-owner, the film is bristling with impressive performances and Slattery directs the action with a firm and confident hand.

The film’s problems lie largely with the narrative, with too many characters doing things that simply don’t ring true, for any reason other than to inject extra confusion or drama into a narrative that already squeezes an unlikely amount of plot into a tight 89 minutes.

There’s also little fresh about it; working class lovable rogues have become a staple of low-budget films and with suspicious deaths, small-time crime, gambling, loyalty and infidelity, the themes have been rehearsed so often that Slattery doesn’t make the best use of a worthy kit of parts.