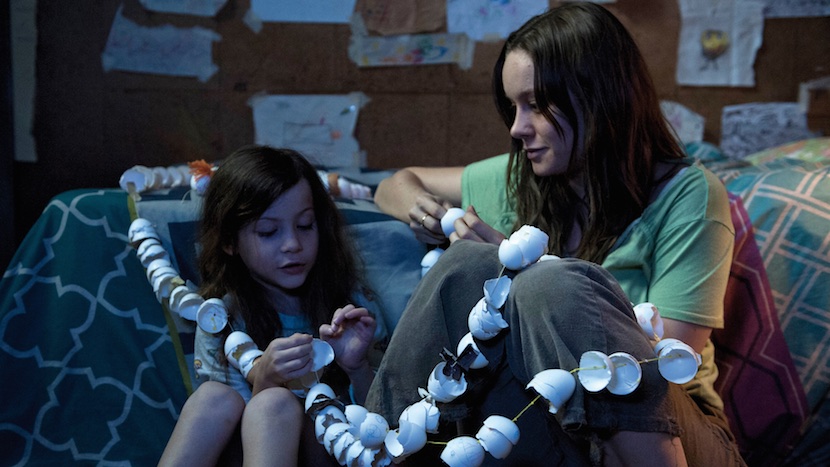 Jack (Jacob Tremblay) is celebrating his fifth birthday, but not quite like most five year old boys. His Ma (Brie Larson) is baking him a birthday cake, but that’s where the similarity ends.

Jack wants candles like he’s seen on birthday cakes on TV. Because that’s all Jack knows about the world – what he’s seen on TV and what his Ma tells him, as he’s spent his entire life – every minute of those five years – in the same room.

Now that he’s old enough, Ma explains that she was kidnapped seven years earlier and has been kept, locked in that room ever since. But she’s had enough, and Jack is now old enough to help her escape.

But escaping is only half of the battle. Adapting to a new world outside makes them both wonder whether they were better in the world that they knew – in the room that they knew.

Room is one of those films that begins as a tremendously successful high concept film but slowly unravels as it starts to leave its raison d’etre behind.

When we first meet Jack and his Ma, her stoicism and his naivety make for a beautiful exploration of the power of a mother’s love for her son and a son’s trust in his mother. It’s an almost perfect study of how to retain your sanity and your strength against such a claustrophobic adversity.

You’re willing her to hatch a plan to escape and spend the first part of the film wondering whether and how she might succeed. For anyone who’s seen the trailer – or even a poster – you’ll know that it’s not a spoiler to tell you that they do indeed get out, and director Lenny Abrahamson’s handling of this is riveting and his choice of shots when the camera first breaks outside is truly cathartic.

The escape means the film necessarily becomes something else entirely after this point. But a film about how a woman who’s been held in isolation and the son who’s the only positive thing to come out of the previous seven years struggle to cope with the simplest things in life, like stairs and ice-cream, is a similarly thought-provoking prospect.

However, once their oppressor is no longer lurking on the other side of the locked door, and the eponymous room is no longer their world, the power starts to drain from the film.

Watching them learn to be free and seeing their family struggling as much with their return to civilisation as they do have their moments, but one by one, Abrahamson sets up fascinating questions that he stubbornly fails to answer, or worse, doesn’t even try to.

The audience won’t be quite sure where the film is going – but the director and his writer (Emma Donoghue, from her own novel) don’t seem any more certain. The pair manage to tug a few heart-strings effectively, but what starts off as a fascinating, painful-to-watch drama decays into little more than a bog-standard disease-of-the-week TV-movie.

Whether more time in the room would have made for a more satisfying piece of cinema is another question and it’s quite possibly that having the courage of their convictions and following through on some of the loose ends might, instead have been the answer.

It’s never uninteresting and it’s always engaging, but that engagement, ultimately, doesn’t pay off. But even as the pair break out of the confines of the room, this is still an effective piece of low-budget film-making, where the money is very much on the screen; every film-maker outside the studio system dreams of finding the right script involving a handful of characters in a handful of locations.

Brie Larson is rightly picking up attention during awards season but the largely-overlooked Jacob Tremblay is a revelation, a boy so young having to deliver such a confidently complex performance. But two big-name supporting actors, Joan Allen and William H Macy, are given disappointingly little of interest to do.