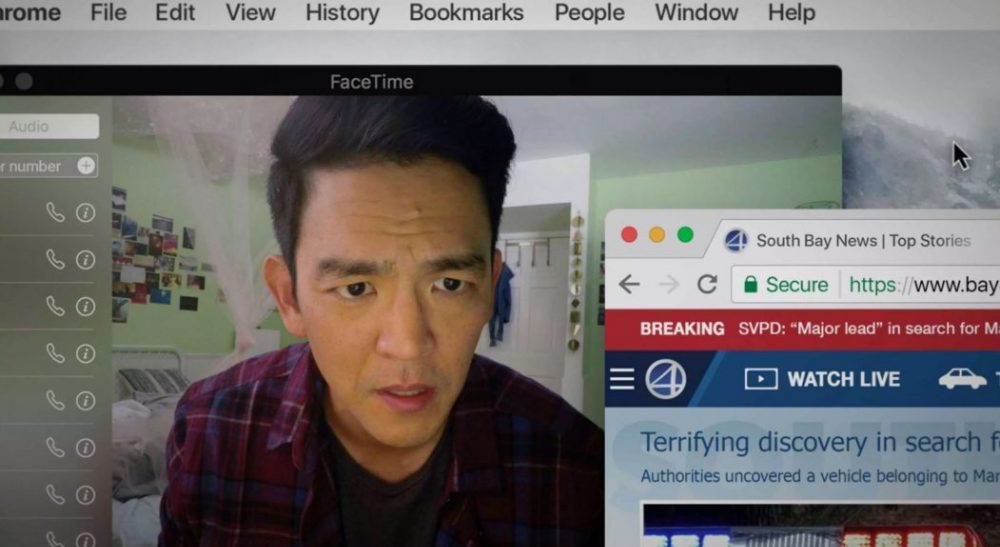 David Kim (John Cho) lives with his sixteen year old daughter Margot (Michelle La) but they hardly ever see each other; most of their communication seems to be on the phone or online.

He gets in one day and realises that she hasn’t been home since they last messaged, so he texts her – and calls her – but there’s no reply.

When she fails to turn up, he reports her missing. Detective Vick (Debra Messing) takes on the case; she’s particularly enthusiastic but doesn’t seem to be having much luck, so David decides to carry out his own search.

But he’s not searching where you might think; it’s a long shot, but he hacks into Margot’s laptop and is shocked to discover that he never really knew his own daughter at all, as he finds the first crumb of a clue to her whereabouts.

It takes time to sift the sign-posts from the red herrings, but the clock is continuing fast;  as the police run out of leads, can David crack the mystery and find his daughter before an unbearable fate finds her?

An opening sequence with echoes of Up features nothing but the screen of our protagonist’s laptop, as he reminisces and sets out to move on with his life.

But what seems, at first, like a gimmick soon turns out to be the mode by which this entire story is told – from the first person point of view of the worried father, as he stares at his computer screen – browsing social media sites, Face-Timing people or watching the news for updates.

From time to time, a turn in the plot doesn’t quite ring true but the director, Aneesh Chaganty, can be forgiven because his tale is so compelling and feels so fresh that you’re prepared to let a handful of forced moments slip through the net. His cheekiness is matched by his brazen ingenuity, as he comes up with clever ways to extend the gimmick to reveal vital cluess without eliciting the rolling of any eyeballs.

The narrative flows satisfyingly convincingly, thanks to – among other things – Cho’s intense and focused central performance and the cinema trope of flashbacks being replaced by David simply going back to look at photos or videos he’s already encountered, as new information emerges.

The film provides a bold window into modern-day youth and the way social media frames everything from their relationships with their friends – or family – to the way they find their place in the world.

There are plenty of genuine twists and turns along the way that make you reassess the credibility of those we meet on the way and viewers will travel the same journey as the protagonist even as Chaganty finds ways to take him out of the house, without leaving the screen-sharing gimmick behind.

Sadly, as the story recognisably approaches its denoument, it jumps the shark, with perhaps one or two false endings too many, but in the context of the world it creates, even when the plot starts to spin wildly beyond the realms of credibility, it takes you on such an engaging journey that you’re more than willing to go with the flow.

Searching is a fresh thriller for the tech-savvy social media generation that will be an education for those less familar with some of the apps on show. It is, though, perhaps a little surprising the extent to which Sony has given a platform to Apple to showcase both its hardware and software.