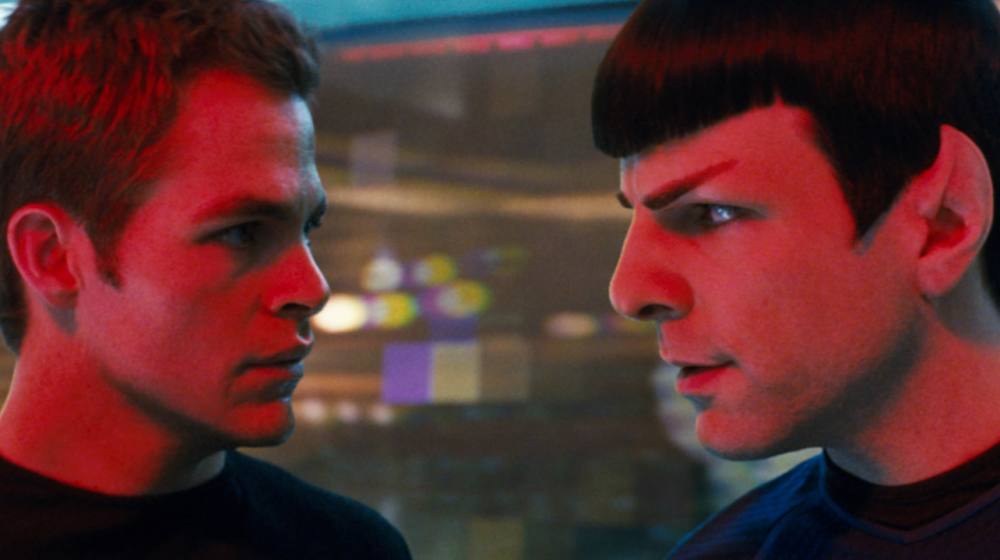 Several centuries hence, Jim (Chris Pine) is a bit of a teenaged tearaway, racing around his small-town in Iowa, getting into fights with the Federation’s space cadets, frequenting his local bar.
After taking on rather too many of them with his fists and eventually coming off the worst, he’s pulled to his feet by Captain Pike (Bruce Greenwood), who urges him to sign up and follow in his father’s footsteps.
It doesn’t take much to convince the ambitious Jim to sign up and aim to become an officer on the maiden voyage of the USS Enterprise in record time.
But his controversial ways get him in trouble with authority, by cheating on a test set by Spock (Zachary Quinto), a Vulcan academic who puts logic before emotions every time.
Despite being grounded, Jim finds himself onboard the Enterprise for a rescue mission to Spock’s home planet, which is under siege from some angry Romulans (led by Eric Bana).
The cool Spock, who lives by the rules, and Jim T Kirk, who lives to break them, have to put aside their differences to lead a young crew – and the universe – to safety.

This film dares to boldly go where many producers have gone before.
There are few films of any genre that come with as much baggage as this – several generations of several TV series and a handful of films – but by starting this story just before the most famous set of characters – including Kirk, Spock, Bones, Scotty, Uhura, Sulu and Chekov – it gives anyone unfamiliar with Star Trek’s universe a fighting chance – while intriguing fans who want to find out how it all began.
Viewers will – by definition – fall into one of the two camps – I’m in the first, but having discussed the film with those in the second, I’m assured that this is a film which largely works from either perspective.
JJ Abrams – the man behind Alias and Lost among others – is no stranger to science fiction or big budget theatrics, so it’s no surprise that he’s delivered a glossy, slick thriller, full of spectacular imagery and exciting action.
The characterisation will – perhaps – be of more interest to long-time fans – for others, the crew of the Enterprise effectively push the plot along, but most are too thinly sketched to provide any personal drama. Quinto’s performance as Spock is impressive – as the only actor called upon to play anything more than standard Hollywood fare, he acquits himself well.
And certain elements of the history – such as the relationship between the Vulcans and the Romulans – feel to be lacking – although here too, fans will be one up on everyone else.
For outsiders, at least, the plot seems to be riddled with illogical inconsistencies (ironic, perhaps, with Spock’s dependence on logic!):
The cadets seem to rocket to the top, above “extras” who’ve presumably been enlisted for years (such an important craft clearly wouldn’t be sent on such a crucial mission crewed, almost entirely, with beginners.
The backstory of Scotty (Simon Pegg) doesn’t seem to be consistent with his subsequent comfortable fit into the Starfleet team.
There seem to be inconsistencies in the way they’re beamed up and down – although perhaps those in the know could explain them.
And from a story-telling point of view, a key meeting, on which the success of the whole mission depends, is illogically unlikely – that in the whole universe, two characters happen to find themselves in the same cave on the same planet at the same point in time – and on that point, what’s the deal with breaking the main rule of time-travel as expressed in every other time-bending tale?
There are some nice subtle nods to the TV show – such as the Vulcan grip that I know only because bullies did it to me at school when I was growing up – which will please Trekkers but pass by most other viewers.
For people like me, it’s the kind of entertaining sci-fi flick that can be enjoyed on its own level, without needing to understand all the intricacies. It’s probably a three star film for us.
For die-hard fans, there’ll be more in-references to catch and more satisfaction as parts of the characters’ histories slot into place. For you, it would probably be a four star film.