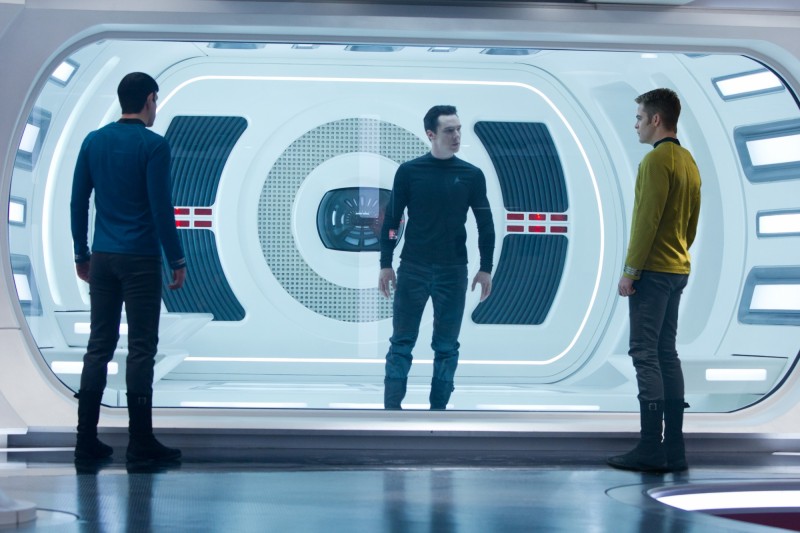 After Captain Kirk (Chris Pine) and Mr Spock (Zachary Quinto) bend the rules to save a planet from self destruction, heads have to roll. Admiral Pike (Bruce Greenwood) demotes Kirk and orders him to serve under him on their next mission.

Before that can come about, Starfleet’s London office is blown up, prompting the organisation’s senior officials to hold a crisis meeting at headquarters in San Francisco.

Too late, Kirk realises that this summit would also be a target, and indeed the rogue Starfleet agent John Harrison (Benedict Cumberbatch) follows up the London bombing with a devastating attack, before seeking refuge on the planet of Starfleet’s biggest foes, the Klingons.

Starfleet can’t let the attacks go unavenged and Kirk is reappointed captain of the USS Enterprise, to lead the crew on a mission to find Harrison and bring him to justice.

On the one hand, this is an effective follow-up to the 2009 reboot of one of sci-fi’s most enduring franchises. JJ Abrams returns to direct the same characters – from Kirk and Spock to Bones, Scotty, Sulu, Chekov and Uhura, with the same cast filling the roles.

If you enjoyed their last outing together, what’s not to like? The USS Enterprise travels at warp-speed across the universe, the crew get beamed up and down, switching colour-coded V-necks as they take on different roles, firing state-of-the-art laser guns at their foes.

But for fans of the franchise, there’s little new and even though Abrams was keen to make a film that didn’t require audiences have to have seen any previous Star Trek productions, not just his own predecessor, it will leave newcomers cold. Those familiar with the Starfleet universe will continue their four-year-old debate about how the current actors portray the roles or how well the technology has been contemporised, but ultimately, even a sci-fi adventure is more than its characters and production design.

And it’s the narrative where Star Trek Into Darkness loses the plot. Characters fly here and there, leave people behind, pick them up again, put themselves in danger to fix things, catch people, lose people, trick people, betray people, save people – it’s somewhat contrived and all unnecessarily complicated and convoluted, and it’s never really quite clear who’s doing what to whom and why.

You kind of have to take it on trust and just sit back and enjoy the ride. Visually, it’s fast-moving fun, but it doesn’t feel particularly fresh. Even being converted into 3D doesn’t make it stand out from a busy field; it’s actually quite disconcerting when everything except what Abrams needs you to be concentrating on is blurred.

While Benedict Cumberbatch is perfectly proficient, his rogue agent is not the most interesting of antagonists – another character who turns is a more satisfying bad guy, although his character arc is too predictable.

It’s probably fair to say that if you love Star Trek, this will keep you entertained if not blow you away, while if sci-fi isn’t your thing, you’ll want to give it a wide berth, but for most people, it will be a convoluted but colourful, fast-moving actioner of little consequence.

It’s not surprising that even in red-carpet interviews, JJ Abrams referred to this film as “Star Wa — Trek.” It’s almost as if he just wanted to get this one out of the way, so that he could move on to his true passion, his next project – Star Wars Episode VII, which will be eagerly awaited by another set of fans, desperate not to be as disappointed as they were by George Lucas’s own efforts to go back in time.