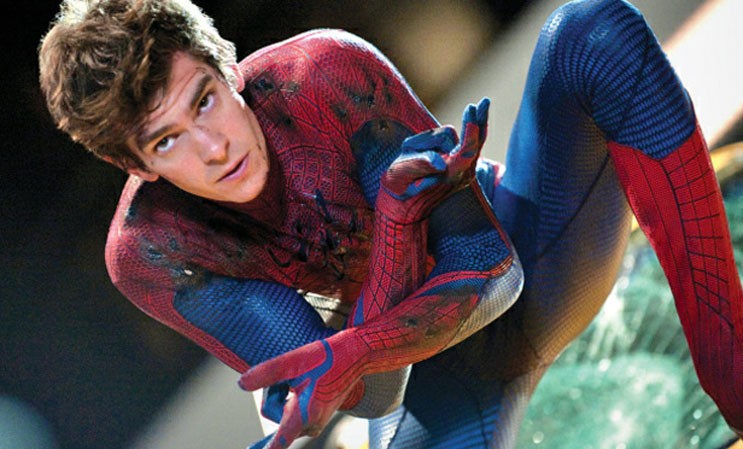 Peter Parker’s parents leave him with his Uncle Ben (Martin Sheen) when his Dad’s research threatens to get the family into trouble.
Years later, a High School Peter (Andrew Garfield) finds his father’s old briefcase, which contains a photo of him with an old colleague, Curt Connors (Rhys Ifans).
Peter pretends to be an intern at the scientific research giant Oscorp to try to talk to Dr Connors about his father, to find out why he disappeared.
While sneaking around Oscorp’s laboratories, Peter is bitten by a radio-active spider, that’s being used as part of a cross-species genetics experiment.
He soon discovers that he’s taken on some of the traits of the spider, including an unnatural strength and the ability to jump and climb, better even than a squirrel. The ability to produce super-strength webs seems to have eluded him, but that’s no bother; the same craft skills that enable him to design and sew a crime-fighting vigilante costume also help him build web-slinging bracelets.
With his outfit, his gadgets and his newfound skills, the righteous and lonely photography-loving high-school student starts spending the nights trying to clean the city streets of petty criminals.
The police captain (Dennis Leary) sees things differently; wherever there’s crime, Spider-Man is there, so he concludes that this masked stranger is responsible for the rising crime-rate.
Connors, meanwhile, has been more actively engaged in his own gene-splicing trial; having lost an arm in an accident, he injects himself with the DNA from a lizard, in the hope that he’ll be able to regrow his limb.
But he doesn’t just regrow his arm; he morphs into a fully fledged giant lizard, determined to use the technique to make humans a stronger species.
With the police on his back, Peter sets about trying to stop Connors turning the entire population of the city into genetic mutants – while developing more than a little crush on the police captain’s daughter, Gwen (Emma Stone).

I’m not going to be churlish about this. As a comic-book adaptation of a much-loved superhero, this ticks all the boxes – visually impressive, thrilling action, just enough back story to make you care about the character and plenty of conflict.
But a film like this can’t be taken simply as a comic-book adaptation. Coming so soon after Sam Raimi’s tremendous take on Spider-Man, which was received as well by critics as by audiences, questions must be asked about how this latest reboot compares.
OK, so it’s not based on a real life story, but was Peter Parker bitten as a school-boy, while he was dating his classmate Gwen (as here) or was it (as Raimi told us) while he was at university, and going out with the aspiring actress Mary-Jane? Taking the saga back to the start, one wonders when it actually began – and if the story goes that our hero was first bitten at the of seventeen, why are he and his girlfriend played by actors in their mid-to-late twenties?
Rebooting a franchise is nothing new – Christopher Nolan did it only recently with Batman, but the caped crusader’s previous outing, nearly a decade earlier, was as more of a camp crusader, so Nolan’s take was truly a dark re-imagining. But Andrew Garfield’s Spider-Man is every bit as much of a troubled, good-doing loner with a comic spin as his predecessor, Tobey Maguire, who wore an almost identical unitard only five years ago.
Maguire and his paramour Kirsten Dunst were the right age for their characters and felt more delightfully awkward as a couple than Garfield and Stone, who lack the emotional depth of their predecessors, but how much can an audience engage with a relationship between two teenagers?
Coming – interestingly – from the director best known for 500 Day’s of Summer, it’s perhaps surprising that the relationships in general are less interesting and dramatic – no love rivals, no long-term nemesis – and both the goodies and badies are less exciting – from his costume and voice to arsenal and mode of transport, Willem Dafoe’s Green Goblin was far more enthralling than Rhys Ifans’ man-sized lizard whose main powers – strength and an ability to climb – are no different from Spider-Man’s.
The effects, while perfectly competent, don’t feel any more advanced – or indeed real – than Sam Raimi’s vision of the naughties, and at more than two and a quarter hours, it feels almost like they’re trying to wring as much as they can out of this film, in case they don’t get a chance to make another one.
While as a comic-book caper, it was thoroughly enjoyable, it didn’t work on as many levels as Spider-Man’s Raimi/Maguire outing, which was as powerful a drama as it was a superhero film.
Webb eschews drama in favour of action, whizzing through the “I’m Spider-Man” scene with no sense of delayed gratification, so that our protagonist can start jumping up walls again.
Had Raimi and Maguire not had a go so recently, this would have been a perfectly acceptable take on the character, but the main question it fails to answer is why the character needed to be rebooted at all. It offers nothing new, surprising or different. It’s not really a new vision, just a perfectly likeable but slightly inferior one.
It’s quite possible that the original team felt they could demand salaries that Sony and Marvel weren’t prepared to meet, but the new film-makers might have been better off just picking up where the old one left off.