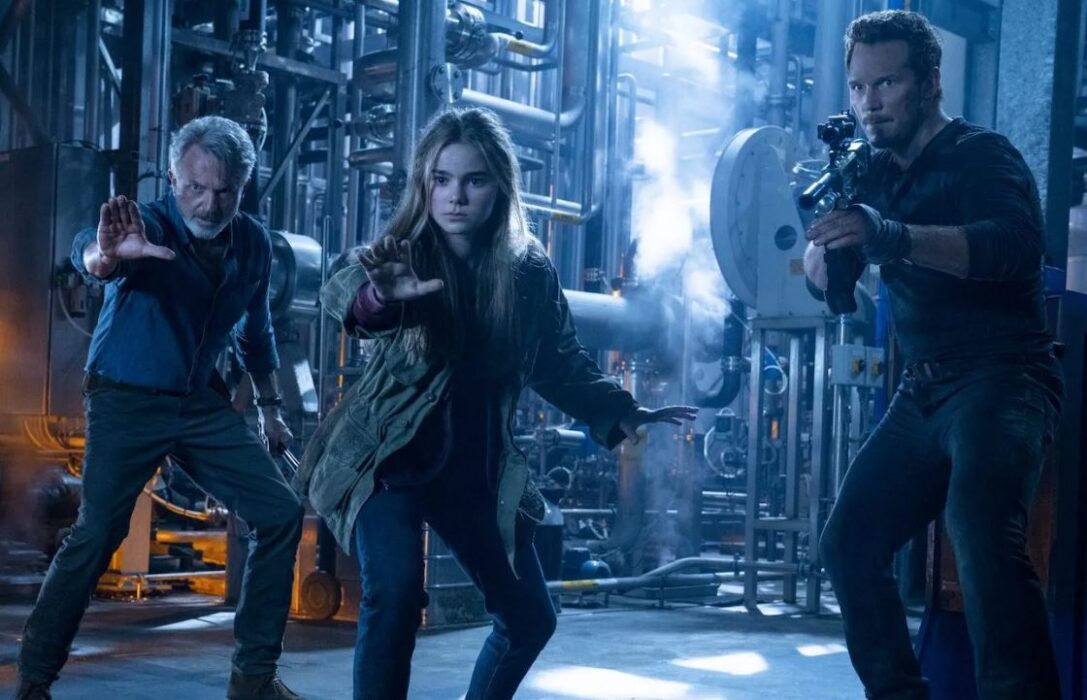 Four years after the events of Fallen Kingdom saw dinosaurs running free across the planet, the former Jurassic World employees Owen (Chris Pratt) and Claire (Bryce Dallas Howard) are living a reclusive lifestyle in the woods in Nevada, with their adopted daughter Maisie (Isabella Sermon), who’s frustrated about being confined to barracks for her own safety.

It turns out the warnings were justified, as one day, when she strays too far from home, she’s kidnapped and sold to mad scientist Dodgson (Campbell Scott), who wants to use peculiarities in her DNA for the benefit of mankind. Dodgson’s company, Biosyn, also happens to be using its headquarters in Italy’s Dolomite mountains to study and breed a vast collection of dinosaurs.

Meanwhile in west Texas, when farms report that crops are being destroyed by swarms of giant locusts, scientist Ellie Sattler (Laura Dern) is called in and discovers that the beasts are only attacking farms that aren’t using Biosyn seed. She calls on her old mentor Alan Grant (Sam Neill) to join her on a trip to the Dolomites, invited by their former colleague Ian Malcolm (Jeff Goldblum), who now works there.

Owen and Claire’s determination to rescue Maisie – and Ellie and Alan’s efforts to expose Biosyn’s devastating activities with the locusts – brings everyone to Northern Italy for a showdown.

Oh – and there are dinosaurs.

After five films in a franchise about re-introducing dinosaurs to planet Earth, with the giant beasts now roaming freely across the world, what is billed as the final film of the Jurassic era has two storylines running alongside each other – one about a couple trying to rescue their kidnapped daughter, the other about a pair of veteran scientists trying to expose a company that’s releasing giant locusts so that it can sell more of its own crops. There isn’t, however, a storyline about how the planet is coping with dinosaurs wandering around aimlessly – looking for food, fighting off aggressors, attacking humans. No bumping into dinosaurs at the shops. No kids feeding their pet dinosaur before heading to school. After the opening credit sequence – which helpfully sums up the previous five films – there’s almost no sense that dinosaurs are now supposedly assimilating into 21st Century society.

We see the odd pet-sized dinosaur in parks and the one time the plot actually makes it’s way to civilisation, we spot a couple milling around in the background while one of our many protagonists speeds past the town square on a motorbike. From time to time, we see humans hiding while dinosaurs attack each other, but there’s only one case where dinosaurs pose a threat to humans – and that’s because humans are controlling the dinosaurs.

There was a great film that could have been made, but instead, we’ve been given the Venn-diagram intersection of two inferior ones. Apart from the bigger problem – of essentially giving us the wrong film in the first place – even the way the narrative they’ve chosen unfolds feels clunky. People just happen to turn up as and when the plot requires them. Loyalties change in line with the narrative.

The effects, of course, are outstanding, but it was, remember, the opening film of the franchise, back in 1993, that set the modern standard of movie monsters. There are also a handful of well choreographed action sequences, but while it was welcome to see the return of the three stars from the first film, they were wasted in an illogical, derivative half-plot that sits uncomfortably alongside – before integrating with – an even more illogical and derivative half-plot involving their successors, each half featuring the same villain – a villain who would have been more at home in a Bond film.

Rarely has Hollywood squandered such talent and opportunity, bring a much-loved franchise to a underwhelming anti-climax.

Sadly, Jurassic World: Dominion does for the Jurassic Park franchise what an asteroid did for the dinosaurs.