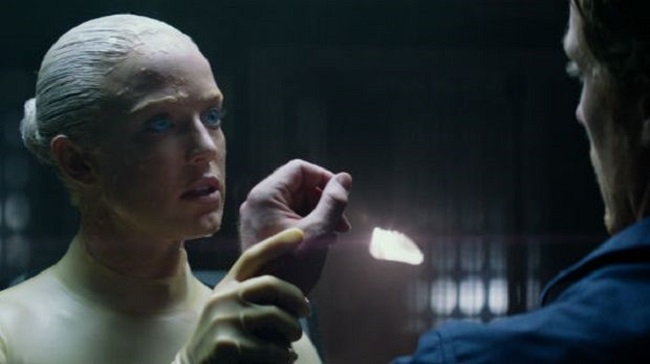 In the near future, a new Cold War is brewing, with China posing a threat to the free West.

When his new assistant Ava (Caity Lotz) meets an unexpected end, Vincent builds a robo-soldier in her image, that is able to learn to think and feel like a human, without compromising its mechanical strength.

But just because it looks and learns to act like Ava, can it become anything more than the warrior it was designed to be?

Coming so soon after the reboot of the Robocop franchise, it’s interesting to see how a very similar premise is dealt with by a small-time British director on a budget a tiny fraction of that afforded to Hollywood.

In many ways, Caradog James’s vision mirrors its older cousin, chiefly in its exploration of designing new technology to compliment and improve the human body. Both films examine the conflict between mechanical strength and human morality.

This film pushes the idea a little further, adding artificial intelligence to the mix, as it takes soldiers who are brain dead, while Robocop found an officer whose brain was all that was still functioning.

Where this film succeeds is its ambition to compete with bigger budget films on its own terms, while maintaining a strong and original narrative, despite exploring familiar themes.

James makes good use of cheap locations and makes the most of some low-budget special effects. But some sentimental back-stories and acting that would feel more at home on the small screen, hold back the film’s scope.