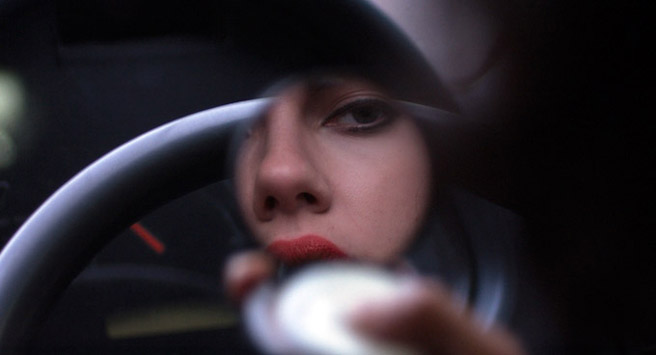 A mysterious young woman (Scarlett Johansson) is driving around Glasgow in a white van, apparently lost.

After eyeing up local men, she selects and stops some to ask for directions, offering the single ones lifts to wherever they’re going, on the way.

But they never reach their destination. They’re never seen again.

Their gruesome fate, at the hands of a seductive monster, almost defies explanation.

But when she has an experience that tests her resolve, she becomes a less effective predator and soon finds herself on the other end of the chase.

Jonathan Glazer’s adaptation of Michel Faber’s 2000 novel is as interesting for the techniques he employed as it is for its visual flair and creepy narrative.

With one of Hollywood’s biggest stars, Scarlett Johansson, hiding behind a black wig and an English accent, many of the men her character picked up were actually genuine passers-by, filmed by hidden cameras, thinking they were giving directions to a visitor from out of town.

The review can’t really be written without disclosing – as is done early on – that Johansson is playing an alien, but unlike the book of the same name, there are little clues as to why she is rounding up men. But the actress is clearly as alien to everyday Glasgow life as her character.

The scenes in which we see her disposing of her prey are as hauntingly disturbing as they are clinically beautiful and contrast effectively with the banality of Glasgow’s featureless buildings.

The screeching string sound-track adds to the unsettling nature of what we’re watching.

Watching the predator become the prey is also an interesting twist, but the narrative is so loose that the switch isn’t entirely convincing.

Johansson’s performance is necessarily and effectively blank, which frustratingly makes it hard to know who to root for and only one of the other characters is at all familiar; Paul Brannigan, from Ken Loach’s Angel’s Share, is fittingly given the most detailed demise.

It’s not an entirely successful film, but neither is it entirely unsuccessful and it’s certainly a bold and original piece of cinema.

It will unquestionably divide audiences, getting under the skin of cine-literate viewers with an appetite for disturbing science fiction drama, but getting stuck in the craw of people who require more explanation, more action or more detailed narrative.