“Article 15” refers to the section of the Indian constitution which prohibits discrimination on the basis of religion, race, caste, sex or place of birth. But this has not stopped the centuries old custom of caste apartheid in India; corrupt but powerful government officials, landlords and businessmen belonging to high caste Hindu communities often work in unison to deny basic rights to the Dalits. 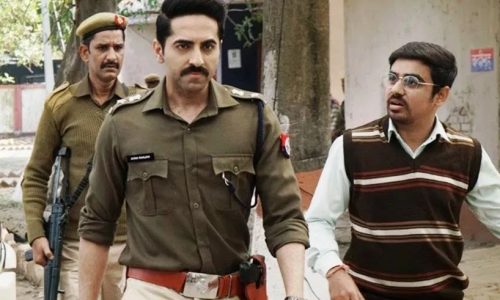 A young police officer, Ayan (played by a Bollywood star, Ayushmaan Khurana), brought up in the West with his modern liberal outlook, begins a new posting as head of a district in rural India where the system is totally controlled by a nexus of corrupt local police officers and upper caste Hindu groups.

Soon after the officer arrives, three low caste girls go missing. The next day, two are found dead hanging from a tree. Ayan is determined to find the third one while also defying all pressures to close the case about the dead; his juniors have arrested the family members of the girls instead of helping them.

Ayan is relentless in his pursuit and eventually discovers the body of the third missing girl, finds evidence of rape against a powerful landlord and businessman and also against two of his own junior officers.

The film is inspired by a gruesome case of alleged gang rape and murder that happened 5 years ago in India’s biggest state, Uttar Pradesh. Two young Dalit girls were found hanging from a tree. Initial police reports said the girls committed suicide but only after the story provoked outrage across India and abroad, were rape and murder investigations launched. Eventually three men were charged with rape and murder and two police officers were also arrested for their dereliction of duty.

To highlight the plight of Dalits in India, the film also emulates a number of other events in recent years in India including one in the Prime Minister Narendra Modi’s home state of Gujarat, where a number of Dalits were mercilessly beaten up for allegedly killing cows, regarded as holy by the Hindus. That event also sparked widespread protests in India.

Speaking after the screening in London, the director and producer of the film, Anubhav Sinha, said he had been planning to make the film for several years inspired by a number of cases of violence against the Dalits. He said he wanted to remind the audiences in India of Article 15 and highlight the fact that despite this law, discrimination in India goes on, and must stop.

This is Sinha’s second film to have its premiere at the London Indian Film Festival in as many years. Last year he brought “Mulk” which highlighted the pain Muslims in India are going through and how their loyalty towards the country is increasingly questioned. The critically acclaimed film won Sinha one of India’s prestigious Filmfare awards.

Article 15, like Mulk, is not an easy film to watch and is not your typical Bollywood music and dance drama. The film makes you think about what’s going on in contemporary India and provokes debate on a vital issue.

Ayushmann Khurana is excellent as the police officer determined to go under the skin of the case, so is Sayani Gupta as Gaura, a Dalit activist. Manoj Pahwa and Kumud Mishra as corrupt police officers also played the roles well. Cinematographer, Ewan Mulligan, has been able to project the grim and grey atmosphere and without him, the film might have turned out less powerful.

Article 15 goes on UK and world-wide release on Friday the 28th June.

The London Indian Film Festival, supported by the Bagri Foundation and the BFI, runs until 29th June in London, closing with Ritesh Batra’s film “Photograph” starring Nawazuddin Siddiqui, before a selection of films tour four other British cities – including Manchester and Birmingham – until 8th July.