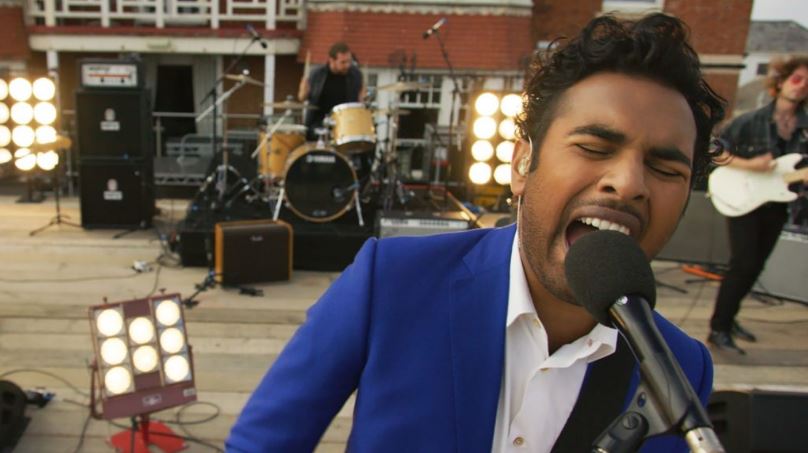 Jack Malik (Himesh Patel) has put off the grown-up life of being a school teacher in the vain hope of achieving stardom as a singer-songwriter, managed by his childhood best-friend, Ellie (Lily James).

She’s disappointed when he gives up, but understands his assertion that it would “take a miracle” for him to make it now.

Cycling home, with his guitar on his back, he’s knocked off his bike by a bus, losing consciousness, two front teeth and his guitar.

When he’s back up on his feet, his friends present him with a new guitar and he gives it a test drive with an old classic, Yesterday.

“When did you write that?” they ask, incredulously. When Jack realises they’re not joking, he takes it upon himself to get the Beatles back-catalogue heard by a world which – inexplicably – has never heard of the Fab Four.

One miracle later and super-stardom awaits. But with the taste of success, could Jack lose what he cherishes most?

If you believe what you read on the side of red buses, this is the “feel-good film of the summer.”

It’s certainly feel-good – how could a Working Title film written by Four Weddings and Love Actually’s Richard Curtis and full of Beatles songs not be? But does that make it a chart topper in its own right?

From the set-up – a failed musician saying he’s going to need a miracle to become a success – to the upbeat finale, with a smattering of offbeat sidekicks, missed opportunities for love and celebrity cameos along the way, Yesterday is an intricately constructed confection that will press all the right buttons for anyone so inclined to have their buttons pressed.

But cynics are likely to be less permissive and expect some kind of an explanation of why the world knows nothing about the Beatles – they might be less inclined to accept the unlikely traits of highly entertaining but completely unbelievable characters such as Joel Fry’s roadie, Rocky – and they might be less convinced by the notion that true love can’t wait a couple of minutes – or even months.

And perhaps the problem – from the point of view of the target audience – is that the cynics are likely to be fans of Danny Boyle, whose oeuvre, from Shallow Grave and Trainspotting, through 28 Days Later and Slumdog Millionaire to 127 Hours or Trance – is far edgier than anything Richard Curtis could conjure up. And when the narrative sets up what looks like it could be an edgier, darker plot-line, it Curtises out with a timid whimper, refusing to sour the saccharin proceedings.

With only a handful of moments for Boyle’s directorial flair to emerge, Yesterday is far more Curtis than Boyle.

The use of the genuine Beatles version of Hey Jude over the closing credits serves to highlight how average Himesh Patel’s singing is – rendering his sudden super-stardom all the more unlikely…wouldn’t the stereotypical money-hungry record label just get his new mate Ed Sheeran to record these great unheard songs? But this is a film about the writing, rather than the performing – more Curtis than Boyle. Ed Sheeran’s acting, by the way, is about as convincing as Patel’s singing – and he’s playing himself.

The characters are likeable and goofy enough and the romantic comedy plays out in the predictable fashion that will inoffensively wash over viewers.

The narrative – and the fantasy world in which it sits – will delight Curtis fans as much as they frustrate followers of Boyle and the best laughs come, oddly, from asides not directly relevant to the plot.

After Bohemian Rhapsody and Rocketman, it’s the third film in less than a year to be built around the music of a classic British artist, so it’s refreshing to see that they’re trying to do something different, steering well clear of biopic territory. It’s always welcome to hear a Beatles collection – even if it’s more Pop Idol than pop legends.

But while it’ll feel good for viewers happy to be manipulated by Richard Curtis, it won’t quite have the bite expected from Danny Boyle.