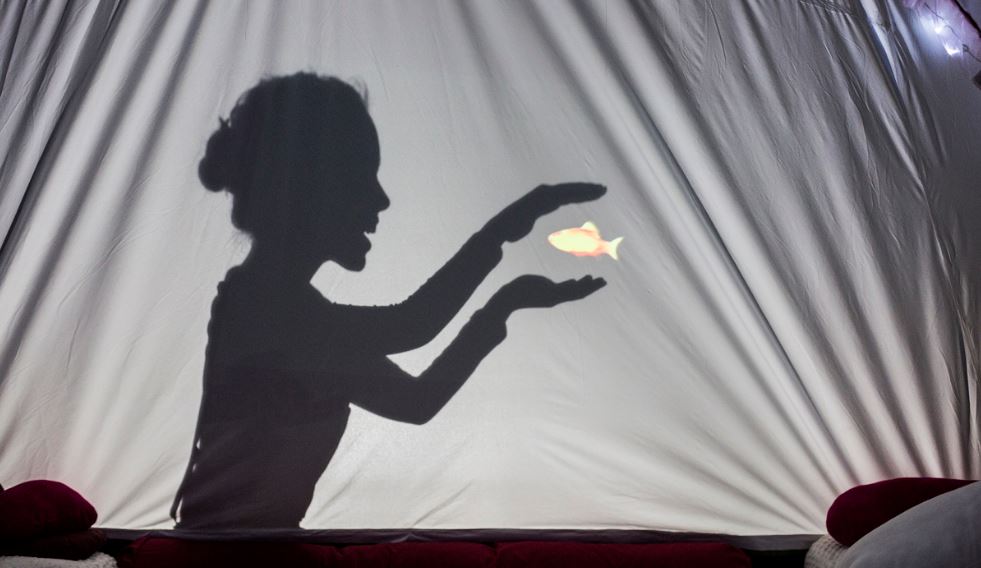 “What was it like in mummy’s tummy?” is the question that the What’s Coming Out of the Box performing arts company guesses that many of us will have been asked by our children and  this is its attempt to answer it.

It all starts with a seed – we all know that – and that’s how this thoroughly engaging piece of immersive theatre begins, as children aged up to 4 are invited to run their fingers through a paddling pool full of seeds. Some seeds are then placed in a tube, topped up with water and food dye and left – not for nine months, but for the duration of the experience.

After a quick bubble show – always a winner with the toddlers – parents and kids are invited into a white tent, filled with red, pink and white cushions, where their senses are bombarded from all directions.

Repetitive muffled noises – some emanating from within the tent, others from without, lights, shadows, balloons, water sprays, fans, smells – even the taste-buds get to enjoy this sensory experience with the offer of sticks of banana.

Children and adults alike will enjoy the various elements and be taken to another place – whether it’s a womb or not is open to question.

There’s never any explanation of what’s going on or whether the intention is to present a direct correlation between the experience of the audience and that of a foetus. It’s much more fluid and open to interpretation, but in truth, this is not about learning – it’s about being and feeling. The target audience of 4 and under wouldn’t understand a biology lesson anyway.

Allowing the children to run around or sit and watch the various elements in awe presents a safe and casual environment for youngsters to be guided by their senses although they’re likely to learn more about the world around them than the tummy where they started their journey.

The USP of this show is likely to be most effective on children at the older end of the target age range, who might already have some idea of what it means to be “in mummy’s tummy”  – for the youngest, it’ll be no different from the kind of sensory experiences they might have at a weekly play group – but no less engaging for it.

Reviewed on 23rd June 2019 at Arts Depot, North Finchley. The tour continues through Nottingham, Rossendale, Deal, Beaconsfield and Oxford, before ending on 28th July at Theatr Clwyd in Mold.