The older you get, the harder it becomes. One of the many slogans appearing on badges being handed out with festival accreditation this year tries to dispel the myth that Cannes is a holiday. “We DO work hard in Cannes, you know,” it says. As a younger man, starting off the morning with an 8.30am screening, filling the day with screenings, press conferences, panel discussions, interviews and receptions that end in the small hours, before returning to write up the day, get a couple of hours sleep and then start all over again was manageable. No longer. After 3 hours sleep on Saturday night and just an hour and a half last night, Monday would be a rude awakening.

Things started off fine, with the brisk seaside walk to the Grand Theatre Lumiere charging up my batteries for one of the most eagerly awaited titles of this year’s competition – Yorgos Lanthimos’s second collaboration with Colin Farrell, after The Lobster, The Killing of a Sacred Deer – one of Nicole Kidman’s four projects down on the Riviera this year. After the ever-increasing security decided that I might try to launch a terrorist attack with a funsize Soreen bar they found in my bag, I had the somewhat surreal prospect of seeing them line up the five snacks I had hoped to graze on during the day to keep up my energy. “You can eat two here, before you go inside, but we’re keeping the others,” they insisted. How could I choose? With France at his highest terror alert for years, and soldiers parading up and down the Croisette with machine guns, Festival security are back to their old tricks of stealing snacks. At least they didn’t find the deodorant in my backpack, like they did with a colleague yesterday – it’s hot here.

Once inside the 2294-seater auditorium, with the snack police behind me, it was time to enjoy – if that’s the right word – another piece of work from the clearly disturbed mind of the man who rose to international prominence with his Greek-language film about over-protective parenting, Dogtooth. This time, heart surgeon and family man Stephen (Farrell) is mysteriously hanging out with a young teenaged boy, Martin, without his wife (Nicole Kidman), son or daughter knowing. Rather that having a secret woman on the side, Stephen appears to have a secret son on the side.  Martin is soon brought into the family fold, but when the true link between him and Stephen becomes clear, an evil force starts to rip the family apart. Farrell has perfectly honed the delivery of a slightly surreal script as an increasingly chilling and never explained narrative begins to unfold with escalating menace, as this psychological thriller reaches its inevitably shocking conclusion. It’s an interesting and quietly chilling piece of work – fitting for the Cannes programme – but more superficial than The Lobster or Dogtooth, which seemed to have more to say about society.

At the news conference that followed, Kidman expressed her surprise that Lanthimos viewed this subtle horror story as a comedy. But she acknowledged that actors have to trust the vision of the director. “As an actor, you can’t be a control freak,” she said. “The job of the actor is to help the director. A lot of the time, his direction is ‘Please do nothing,’ which is difficult. He directs with his eyebrows. As an actor, it’s incredibly gratifying, very freeing.” Without publicly acknowledging that she was joining the ongoing debate about streaming versus cinema releases, in describing her passion for acting, Kidman enthused, “I’m a huge fan of cinema. Sitting in a dark room and being transported.”One reporter pushed Lanthimos to explain what power young Martin held over Stephen – what was it he was doing to bring hell down on his perfect family? “I don’t know either,” he laughed. “It’s a question to take away with you. I don’t like explaining, as I don’t always know.” There were rumbles of discontent from the room – well, certainly from me. Does being an Oscar-nominated, twice-Palme-d’Or- nominated director mean that you don’t need to know what’s going on in your own film? Any newcomer, trying to pitch a project to a studio or financier, who is asked “But what is actually happening here?” would never be allowed to get away with “I don’t know.  But give me the money to make the film anyway.” Whose job is it to make up the story? The film-maker or the audience? Viewers don’t need to be spoon-fed, but it would at least be nice to know that there is an answer before you start looking for it. It brings a whole new perspective to the basic literary question of “What was Shakespeare thinking when he wrote this?” Is it now OK to answer simply, “He didn’t know”? Perhaps art is in the eye of the beholder, rather than the mind of the artist, after all. 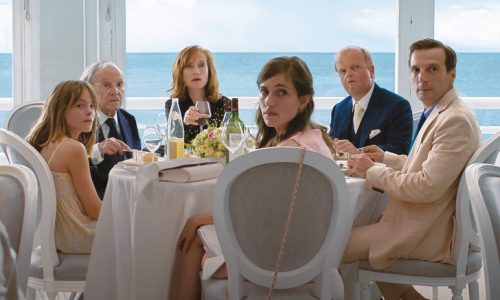 Next it was off to see the latest film from two-time Palme d’Or winner Michael Haneke, Happy End. It is clear, from anyone who’s seen his previous work – such as Amour or The White Ribbon – that the “Happy” in the title is no indication of the mood of the film. Turning his sights on French bourgeois society, in the form of a family-run construction firm, there are few shocks or surprises in what he has to say this time. Intertwining dysfunctional families, miserable protagonists who can’t seem to find a path to contentment as problems – both professional and personal – continue to reign down. With an ageing Jean-Louis Trintignant handing down the company to his daughter Isabelle Huppert, it almost feels like Haneke is taking forward the characters from Amour, but much seems to be taken from his previous work, with other elements, such as France’s racial divide, coming in for scrutiny. There were a number of directing flourishes that – as with Yorgos Lanthimos – you feel that Haneke is just allowed to get away with, because he’s Haneke – such as a scene where the family patriarch is wheeling his wheelchair down the road and stops to talk to a group of young men, but it’s all filmed in a single shot from the other side of the main road, cars whizzing past in both directions, impossible to hear the conversation or even properly see their faces, to get an idea of what’s being said. Happy End had an unhappy beginning, with a five minute sequence, seen through a child’s mobile phone camera, so it was – at least – a freeing relief when the full picture finally popped out. But it frequently returned to computer or phone screens during the course of the film, with a lot of typing, rather than speaking, making it increasingly challenging for non French-speakers to keep up – and tired ones to stay in the zone. Comfortable seats, a dark room, the sound of gentle typing, lulling you off to sleep.

Over in what’s called the “Village International,” where most countries have marquees to attract foreign film-makers and market delegates, the UK Film Centre used to be a throbbing hive of activity – packed to the gills with people attending an endless stream of panel discussions, including industry insiders and on-screen talent. This year’s programme was somewhat more subdued, with fewer big hitters and the last of the panel discussions on the Monday, as if there’s no-one around for the second week. There was an interesting conversation about how to take China’s example of targeting cinema-goers under 30 – with the question asked about whether it’s even a problem that the average age of audiences in the UK is 47. While this was going on, film-makers were filtering through to the terrace, where they find a seat, discuss their projects with colleagues and others – and often butt into neighbour conversations. It’s a perfect way to meet people – some of whom could end up being future collaborators – or at the very least, someone to hang out with for an afternoon. This is one of the few areas in life where it’s generally not seen as rude to interrupt, but welcome. While I was chatting to British actor and director Damian Samuels, who was promoting his time-travelling fantasy romcom The Five Wives and Lives of Melvyn Pfferberg, the first interruption came from LA-based film-makers Marco Bollinger and Jodie Livingston. They were selling a series of five documentary shorts about Syrian refugees, including one about how a 12 year old girl escaped the war and rebuilt her life, singing in a choir. No sooner did they vacate their seats, than another pair of film-makers took over – both their seats and their part in my conversation. This time it was British mother-and-daughter team, with young writer-director Ornella Hawthorn Gardez, promoting her short film Ride Like Mourning, depicting fast-paced biker culture. Her film was registered at the Short Film Corner – the first step on the Cannes ladder for many new film-makers – but her aim was to generate interest and finance to develop the short into her debut feature.

As the afternoon wore on and the evening drew near, it was time to explore some of the other marquees – at around this time of day, many are hosting receptions – some ticketed, some not, and some ticketed but with unguarded access around the back. The only problem is – if it’s a problem – that you never quite know whether the rose you’re drinking or the nibbles you’re munching are courtesy of the Czech Republic, Cyprus or Slovenia.

Later in the week, I’m meant to be meeting the producer and director of the acclaimed Tangerine, who are promoting their latest film, The Florida Project, in this year’s Directors’ Fortnight strand, so I thought I ought to do them the courtesy of seeing the film first. But in typical Cannes fashion, after queuing up for half an hour, I didn’t get in.  One of the other frustrations of the Cannes experience, time wasted in long queues for nothing, made worse on this occasion by the embarrassment of having to meet the film-makers without having seen their film.

Now, a quandary. Dressed for the day-time, not the evening, I knew that if I returned to the apartment to freshen up, I wouldn’t want to come back out again, but I gave it a go. Perhaps my little keyboard-tapping-inspired power-doze had recharged my batteries enough. I scooted back to the Debussy Theatre to catch the new film from another Palme d’Or winner, Laurent Cantet – L’Atelier, or The Workshop, was screening in the Un Certain Regard strand – the Championship to the Palme d’Or competition’s Premier League, if you like. Once again, it was a film that played with regular cinematic conventions. Rather than seeing a story unfold, we were seeing a group of young people, taking a writing class, talking about how a story might unfold. But sadly, the seats were too comfortable and the images not visually engaging enough to get me over the hump. The question, then, is whether it’s worth revisiting this one later in the festival. Some such experiences are an escape but this feels like it might have been a missed opportunity. Time to read the reviews. Perhaps I would have been better stopping on the way, at the “Cinema on the Beach,” where they were playing Cannes juror Will Smith in Bad Boys. That might not have been intellectually engaging, but it certainly would’ve kept me awake.