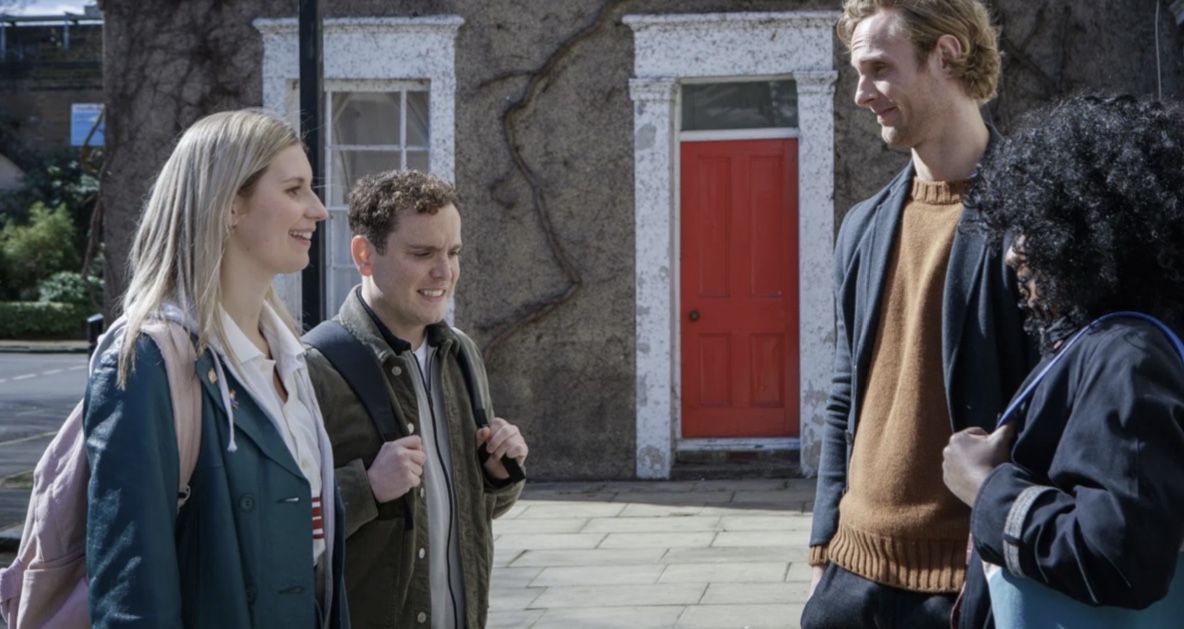 Josh (Joshua McGuire) is finding himself on a trip to Finland, but bad weather delays his flight home. Instead of finding himself, he finds Fola (Susan Wokoma), a travel writer whose journey home is also disrupted.

They end up spending the night together and politely going their separate ways the next morning.

They return home to London to discover that Fola and her husband Zack (Jack Fox) have just moved in across the road from Josh and his girlfriend of eleven years, Esther (Callie Cooke).

The simple, if arch, set-up opens the way for a catalogue of errors, as the pair try to hide what happened from their respective partners, while trying to decide whether they want it to continue or not – as well as navigating ongoing problems with their existing relationships; Zack’s low libido means he and Fola haven’t had sex since they got married, while Josh doesn’t see much of a future for his relationship with Esther, but he doesn’t have the heart to tell her.

Of course their partners find out and it’s their responses which help to propel the narrative in often unexpected directions.

But while there’s plenty to engage in this three-hour-long story, it’s the way that it’s told that is perhaps more striking; 18 episodes of between 8 and 11 minutes. Each episode covers a particular event – a school reunion, a birthday lunch for grandpa and so on – before dovetailing into the next.

The overall story doesn’t naturally stretch to a full three hours, so there are some episodes that feel a little redundant, going off into cul-de-sacs that don’t propel the journey forward. And while some of the humour works, whether it comes from Joshua McGuire’s unpreparedness to tackle such a situation or Esther’s breezy self-confidence, much of it feels a little contrived. And what presents itself as a romantic comedy is actually at its best when it’s tackling more dramatic elements; a character who’s being unfaithful not seeing the irony of telling off his own father for being unfaithful – and the way Fola responds when she realises that Zack has worked out what she’s up to is a fascinating piece of relationship psychology.

But with profound relationship analysis mixed in with some unlikely silliness, the tone can feel a little uneven, and you wonder whether perhaps it would’ve worked better in 12 rather than 18 chunks.

While you’ll find yourself drawn to support some characters, despite their questionable decisions, others will be less successful at keeping you on side, which sometimes makes it challenging to keep rooting for them, although the moral ambiguity certainly makes you wonder where you even want it to end up.

With episodes of roundabout ten minutes in duration, each ending in a mini-cliff-hanger, Cheaters is made for binge-watching in an age when not everyone has an hour to devote to a single TV show each night. But when it’s so easily digestible – and sometimes compelling enough – that you consume the whole series in just three sessions, you’ve basically watched three hour long episodes and wasted fifteen minutes watching credits. The point being – encouraging binge-watching detracts from the very USP of the show.

Cheaters takes its lead from the Nick Hornby and Stephen Frears’ 2019 series State of the Union, in which Chris O’Dowd and Rosamund Pike discussed their failing marriage over a pint before each counselling session – again in ten minute episodes. That show – with higher profile creators and stars – picked up Emmy awards in the US but was completely overlooked by BAFTA in the UK. Perhaps the pandemic will prompt BAFTA to reconsider bitesize dramedy as a genre worth honouring.