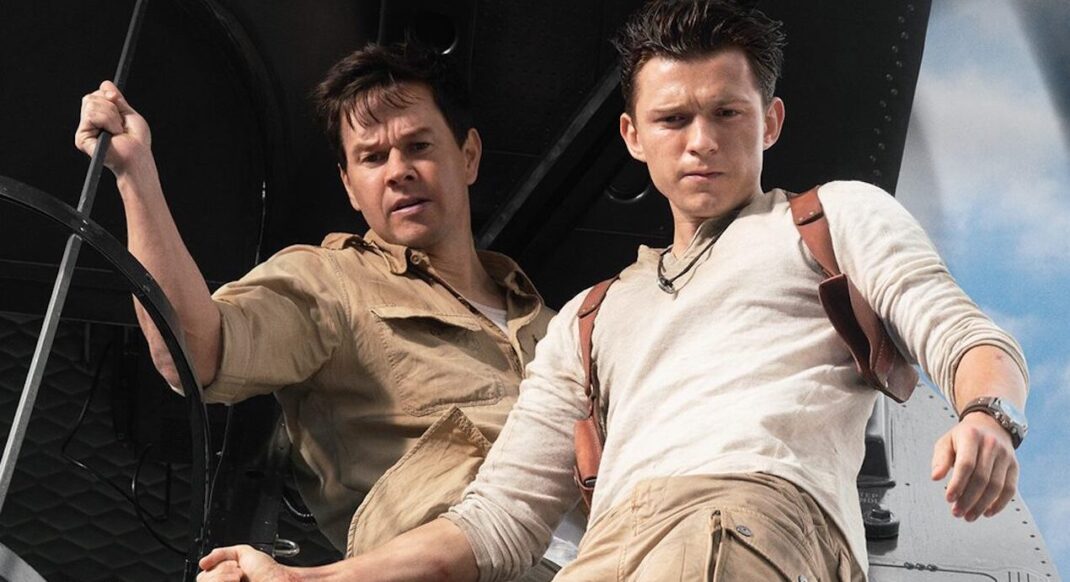 Nate (Tom Holland) is a light-fingered barman at an upmarket establishment in New York, where he takes advantage of some of his wealthier customers for extra tips.

One day, he’s caught in the act by Victor (Mark Wahlberg), who believes Nate can help find some treasure.

Victor explains that he’d been working with Nate’s long-lost brother Sam to try to trace millions of dollars worth of gold, left behind by the explorer Ferdinand Magellan, five hundred years ago.

Nate rises to the challenge, attracted by the booty, but also hoping the job might also help him reconnect with Sam.

The ironically-named Uncharted doesn’t really go anywhere that cinema hasn’t gone before, as a young Indiana-Jones-style global adventurer seeks riches and closure, with villains hot on his tail.

We get to see Tom Holland do much of the same kind of stunts and fights as we’ve seen him do before – only this time without a Spider-Man suit on.

The first problem with this film is that when we first meet the adult Nate, he’s stealing from a customer with impunity and this is never addressed; we’re expected to root for a petty thief.

Once the plot kicks in, under the mentorship of Mark Wahlberg’s treasure-seeker, he follows clues left by his missing brother that take him from the Big Apple to ancient chambers beneath the streets of Barcelona and the beaches of the Philippines, with James-Bond-style action sequences on European rooftops and in the cargo hold of a military plane.

Trailing in their wake are a ruthless Spanish collector (Antonio Banderas), his hired-hand Braddock (Tati Gabrielle), an Australian freelancer Chloe (Sophia Ali) and a bunch of brutal goons.

Uncharted is based on the video game franchise of the same name and largely manages to avoid the fate of most in this genre, working in its own right as an adventure film, without feeling like you’re watching someone else gaming.

Early on, the character-building banter between Tom Holland and Mark Wahlberg is entertaining enough and wins you round to supporting their cause, but personalities soon fly out of the window as the plot spins increasingly out of control.

There’s a slightly bitter after-taste of misogyny, with the conclusion appearing to be that you can trust men, but you can’t trust women – which appears to be an unfortunate consequence of the admirable aim of putting strong female characters on screen.

Uncharted is bursting with plot holes, inconsistences and corny tropes but it’s always visually interesting – if familiar – and it’s a more entertaining watch than it has any right to be. A chase scene that brings old treasure-hunting pirate legends up to date is among the highlights.

Midway through the end credits, there’s a scene that throws forward to a sequel – whether we get to see the rest of it depends on whether the film-going audience takes to this franchise as well as gamers have.