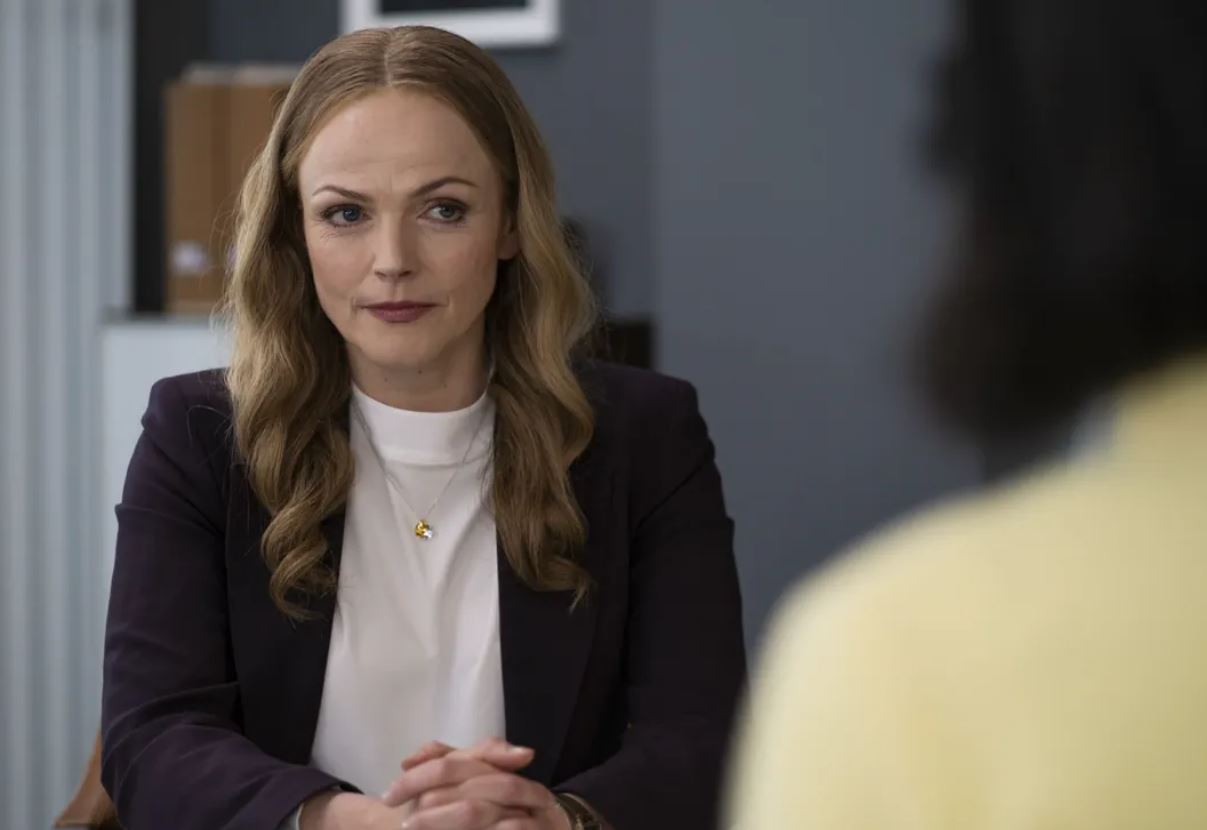 Sam (Maxine Peake) has worked her way up to becoming a no-nonsense Chief Operating Officer at Fly, a small-town family-run sportswear firm that’s about to go public.

Their HR director has recently left under a cloud and his replacement, Maya (Rakhee Thakrar) is ready to shake-up the culture at the company.

Tess (Callie Cooke) has been with the firm for more than ten years and is still struggling to come to terms with the death of Amy (Amy Leeson), who started around the same time as her. Her body was found in an alleyway, after a work night out, during which she’d snorted cocaine provided by one of the bosses, Gareth (Kieran Bew), who runs Fly with his brother Owen (Ben Batt), under the watchful eye of their mother Anita (Alison Steadman).

Amy’s death – and the way Tess has been treated ever since – has left her feeling suicidal and the company has never had her back, until now. Maya starts to dig around to help her move on and uncovers a history of sexual harassment and worse at the company, which won’t look good ahead of the flotation.

Her loyalty is to Tess, not the firm, and she won’t be silenced. But when ghosts from her own past resurface, Maya’s dedication to her new cause is threatened.

The first episode of this four-part BBC drama begins with Maxine Peake’s Sam arriving at work to find a body in the foyer, having fallen from a mezzanine balcony, two floors above. It looks like a suicide but the police take Sam off for questioning to be sure.

They don’t seem to question anyone else about this – just Sam. Is she the only suspect? Indeed, is she even a suspect at all? For now, we don’t even know who’s dead, as the story unfolds through flashbacks from the interview room.

It’s not so much a whodunnit, as a who-done-what-and-why? The writers dangle clues and red-herrings and, for the first three episodes, build up a picture of a dysfunctional family running a dysfunctional business, with their hired lieutenant trying to hold everything together.

The storyline is supposedly inspired by the Harvey Weinstein scandal, as it suggests a culture of powerful men taking advantage of young women they work for, but there’s probably more of a Godfather – or Godmother – vibe underlying it, with the family stopping at nothing to move forward and people being made offers they can’t refuse.

It’s not until the end of Episode 3 that the victim of the fall is revealed, which gives the plot the big shot in the arm that it needs; until that point, you feel like you’re going round in circles, wondering what the series is even about. Is it about a young woman who’s driven to suicide by a decade of bullying and cover-ups? Is it about a woman, determined to do the right thing, being driven to suicide when her past catches up to her just as she’s finally found her calling in life? Or is it not about a suicide at all?

Once Episode 4 begins, the “who” and “why” are finally answered, so all that remains is “what next?” In theatrical terms, it’s a long first act, with the structure being more frustrating than intriguing.

Three first three hours almost feel wasted, with four hours’ worth of plot then being condensed into the final episode, as a slow drama, populated by almost entirely unpleasant people, erupts like a volcano of violence. Episode 4 seems like it’s come from an altogether different show.

Most of the supporting characters seem to be box-ticking stereotypes, either to nudge the plot along or to try to bump viewers off-track a little. The script is clunky and too often, people do things that feel so unlikely as to damage the credibility of the wider narrative and much of the acting feels a little leaden. Knowing looks and glass-walled offices add to the TV-shorthand, spoon-feeding the audience.

The denouement can be predicted from the order of the names in the opening credits, so when the closing credits start to roll, there is little you won’t have worked out in advance.

The show is full of greedy, selfish liars and cheats, blank canvasses who get walked over or self-righteous imposters who simply don’t belong, making it hard to empathise with anyone, so when you reach the end of the four hours, you’re left feeling somewhat empty.

This is less about the ongoing operation within the company than it is about how they handle the uncovering of a cover-up that’s been long-forgotten by some and still torments others.

The creators of the show might have hired some of the biggest names on TV – the formidable and scene-stealing Maxine Peake and Alison Steadman – employed a tricksy structure to give it an original edge, used eye-catching locations to deliver a slick design and ensured there are a handful of heart-pumping moments of tension…

…but they haven’t followed all the rules of the game, as the structure renders most of the first three episodes pointless, they haven’t given us any characters to like – or at least they make you like the wrong ones – and the underlying plot feels tired and flits between seeming obvious and arch.