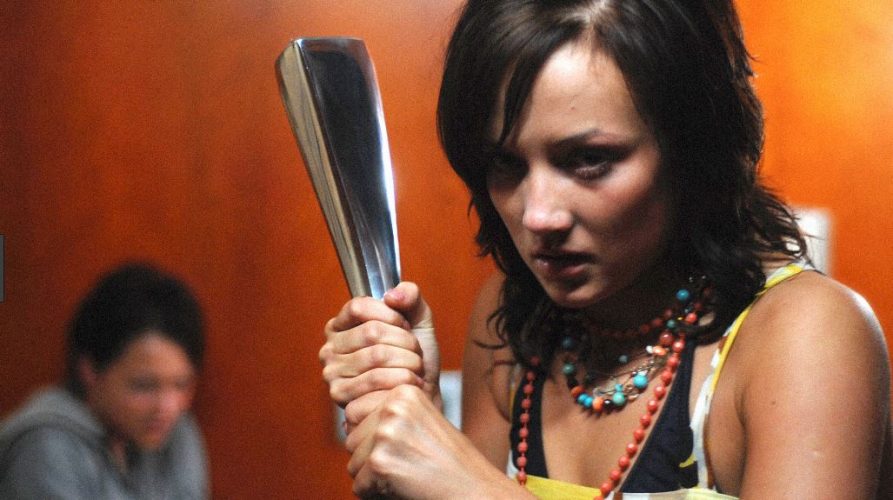 Three young lasses from Yorkshire are determined to brighten up their miserable lives with a holiday, drinking and partying in Mallorca.

Shy Tammi (Nichola Burley) has just gone through a painful break-up and her mates, temptress Lisa (Sian Breckin) and daring Kim (Jaime Winstone), have promised her that this trip is a no-go area for boys.

But when some British lads they meet at a bar invite them for a drink on their luxury yacht, they manage to persuade Tammi to join them: it’ll be just one drink, they assure her – an assurance which, if she’d have known she was being followed by a movie camera, she probably wouldn’t have accepted.

Capturing the whole thing on video for posterity seemed like a good idea until the youngest guy, Josh (Julian Morris), employs the sexual technique of the title – with devastating consequences.

Out at sea, with a dead body on board, do they dump it overboard or report the accident to the police? Unsurprisingly, the boys and the girls have different opinions on this matter – and this has devastating consequences of its own.

The film starts far too slowly and presents us with a bunch of girls who aren’t particularly likeable, so we’re willing them to get on the boat despite all the potential dangers, because we’re just itching for something to happen.

Even when they get on board, it still takes too long to get to the point.

The effect of this is that pretty much all of the plot is squeezed into the second half of the film, making the pacing very uneven.

Much of that plot is highly unoriginal – boys against girls, people hiding behind doors with makeshift weapons, disposing of bodies, inflicting torture with knives – many elements done far better in films as varied as Shallow Grave and Dead Calm.

A film that starts out as a psychological thriller turns into a veritable, shameless bloodbath, but not so much because the plot demands it as because the director wants to get some cheap and easy shocks out of the audience.

You will grimace and cringe, but you won’t really care. Almost without exception, the boys and girls are selfish and deserve pretty much everything they get, which takes most of the drama out of the film.

So if you want a low-budget, gory blood-fest disguised as a teen-thriller, this will probably be up your street – but anyone who prefers drama, intrigue and pleasant characters who you believe in, feel for and care about, should probably navigate well clear.