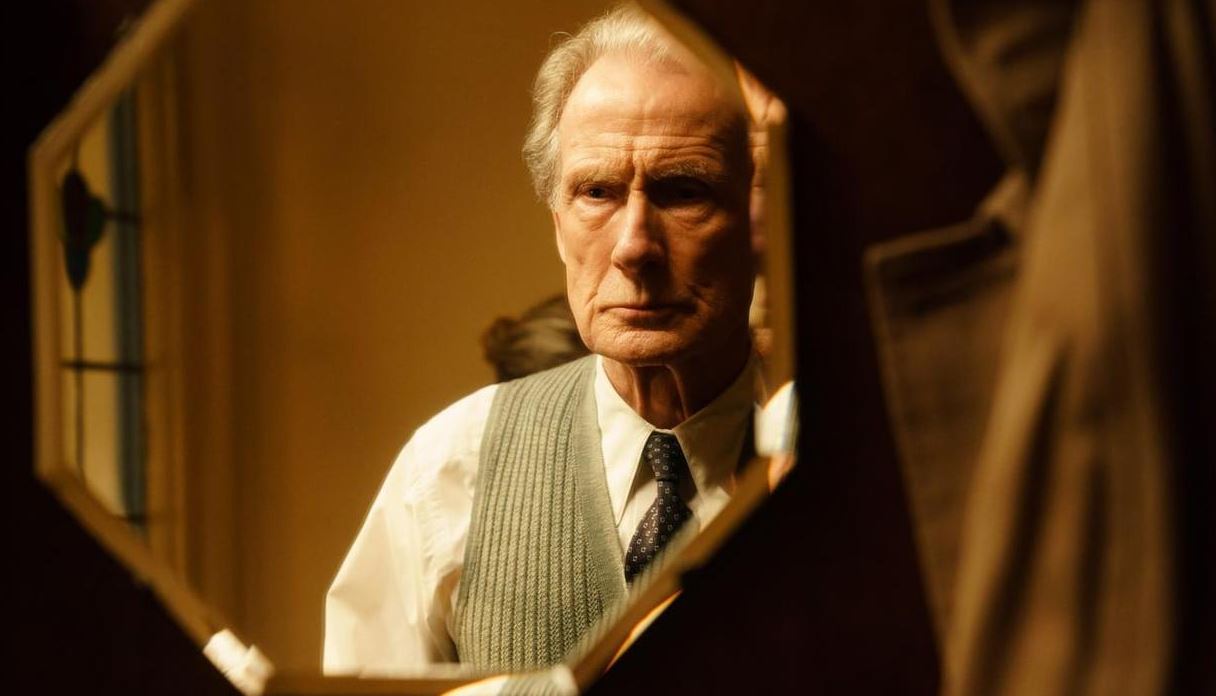 In 1950s London, Mr Williams (Bill Nighy) leads a team of civil servants in the Public Works Department of London County Council. They spend the day moving piles of paper from one tray to another – and arguing with other Departments about whose responsibility it is to do things; it’s a wonder the city is still running.

The only spark in the office is an attraction between the new boy – Mr Wakling (Alex Sharp) and the young woman on the team, Miss Harris (Aimee Lou Wood), but she’s about to leave for a job at a local tea-house.

In the office, Mr Williams is very much king, but at home, with his son and his ambitious daughter-in-law, he’s almost too timid to speak, fearful of being told off or put down.

When he receives a terminal diagnosis from his doctor, he can’t bring himself to tell his son – or any of his colleagues. But with only six months left a head of him, he simply can’t go on pushing paper around the office, and he decides there must be more to life.

He takes a day-trip to the sea-side and goes drinking with a writer – but it turns out that’s not what living is about.

Back in London, he bumps into Miss Harris (Aimee Lou Wood), and invites her for lunch – then the cinema – then for a drink – hanging around with this bright young thing starts to remind him what living is about – not in a romantic way – the relationship that develops is more like the paternal one he has lost with his own son.

But he finally realises that he needs to return to the office after all, to do something useful with what he has left of his life.

The Nobel-prize-winning Japanese-born British novelist Sir Kazuo Ishiguro has adapted Akira Kurosawa’s 1953 drama Ikiru to a UK setting – keeping it in the same year – and it feels so well-suited to the prim-and-proper, restrained, stiff-upper-lip of 1950s Britain that it’s hard to believe that it’s a lift from another country’s culture. Having said that, Ikiru was, itself, inspired by Leo Tolstoy’s 1886 novella The Death of Ivan Ilyich, so perhaps the themes are as timeless as they are universal.

There’s not much new here – an older man, nearing the end of his life, wondering what the point of it all is. But Bill Nighy’s understated performance – in what is, essentially, a one-man show – is masterful in its quiet and considered manifestation of humanity and mortality.

We all live – and we all die – but we all have different views about why we have to do either – and what we want to be able to leave behind.

Is life about enjoying yourself? Or making sure that others do?

After a long working life of meaningless pen-pushing, Mr Williams seeks both personal and professional closure – and decides to use the influence he’s spent years building up to help people you wouldn’t have expected.

The contrast between his home and work life – in terms of who’s in charge – feels authentic. His home life is laced with melancholy and miscommunication; his office with banality and bureaucracy.

And what does he do about this? Rather than ruffling any feathers, he just quietly goes about his business of seeking the odd spark of light where he can find it – nothing dramatic, of course, in keeping with his lifetime of restraint.

This isn’t Scrooge, learning about what he’s done wrong – or It’s A Wonderful Life, where someone thinks themselves useless – just like most of us, mortality has probably never even crossed Mr Williams’ mind – until it was the only thing on his mind.

At the very least, Living will make you stop for a moment to consider what you think about all this life stuff – and what you’ll want to do with it while you still can.

And then, perhaps, you might wonder, “Why wait – until it’s nearly too late?”