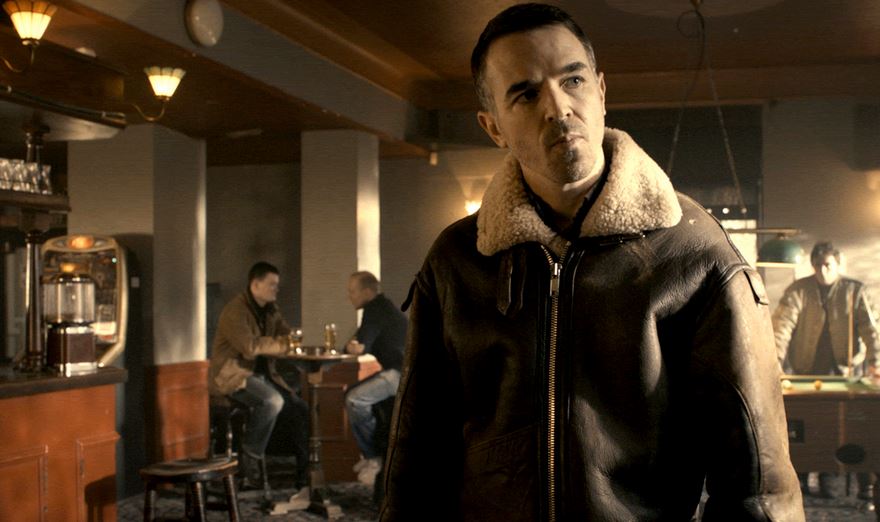 Finally a free man, he’s determined to go clean. With nowhere else to go, he heads back to the flat he used to share with his wife and two young sons. Dean (Will Poulter) and Jimmy (Sammy Williams) aren’t so young anymore – and Bill’s wife has long since abandoned them to fend for themselves.

At fifteen years old, Dean is the “man” of the house, dropping tearaway Sammy at school before heading to work as a labourer at an Olympics construction site. The last thing he wants is his ol’ man coming back to mess things up.

But when Bill mentions the boys to his probation officer (Olivia Williams), the social services are sent in to check up on them.

Dean lets Bill stay for a while, so that he and Jimmy don’t get taken into care, but he makes it clear he’s not really welcome.

Bill uses the opportunity to try to win the trust of his sons, so that he can build a new, clean life for himself.

But when the new dealers on the block rope in Jimmy – Oliver-twist style – to help them drum up business, Bill’s hopes of normality are gone.

Jimmy throws some junk down the drain when he sees the police coming so he owes the ruthless Terry (Leo Gregory) cash he doesn’t have. When Bill finds out Jimmy has resorted to thieving to pay off a drug debt – when he should be enjoying his first year of senior school – the old Wild Bill comes out to confront his former comrades, to set things straight for Jimmy and settle some old scores.

Dexter Fletcher is the latest in a long line of actors to switch to the other side of the camera. Unlike most of those who make the switch, he’s never been the highest profile of names – known mostly for Bugsy Malone and TV’s Press Gang when he was a child and later, one of the Lock Stock 4, since then he’s been seen largely in bit parts in his friend’s films, such as Layer Cake, Stardust and Kick Ass.

Despite his lack of celebrity, he’s convinced financiers to part with enough cash to put his vision on the screen and thank goodness for that.

While, on the surface, you might feel we’ve hung out with East End gangsters once too often, and indeed seen ex-cons trying to clean-up their act once or twice too, Fletcher’s tale is surprisingly warm-hearted.

It works on many levels – as a gangster film and as the story of a father bonding with his estranged sons.

Even a slightly arch storyline involving a “tart with a heart” (Liz White) keeps you involved.

Fletcher’s script, co-written with Danny King, bristles with witty one-liners that fit the mouths that utter them, filling out thoroughly believable moments, brought to life by a charming performance from Charlie Creed-Miles, a gutsy turn from Son of Rambow’s Bill Milner and a delightful career-making appearance from Sammy Williams – last seen in Attack the Block and sure to be seen in the next gritty drama from the Paddy Considines, Andrea Arnolds or Ken Loaches of the industry.

Wild Bill, as the name suggests, harks back to westerns in its presentation of a lonely hero with only a scarlet woman on his side, fighting his foe in the saloon bar, in the desolate surroundings of his estate.

Fletcher’s mature directorial debut, importantly, strikes the right balance between gritty drama and gentle humour – it’s as warm as it is wild – and a welcome addition to British film.

With this under his belt, Fletcher would be wise to hang around behind the camera for a little longer.