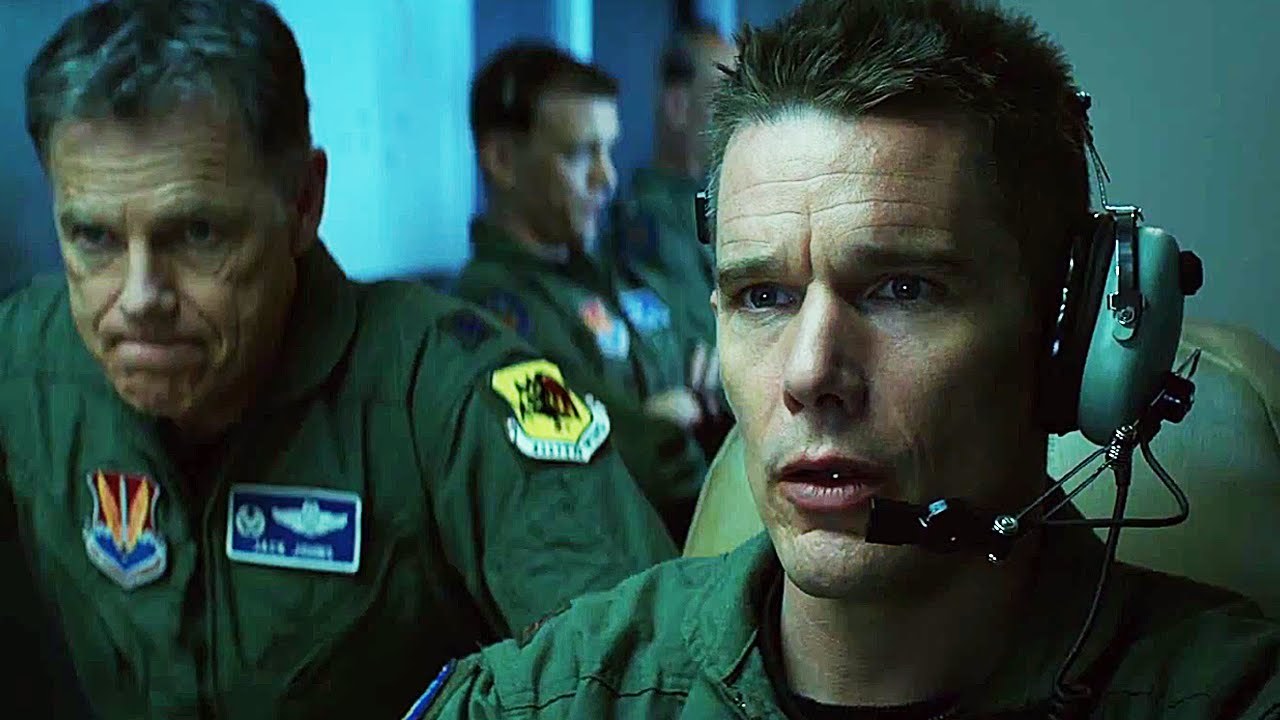 Major Tom Egan (Ethan Hawke) of the US Air Force used to fly fighter jets over Afghanistan. He’s now based in a tin hut on the tarmac of a Las Vegas air base, dropping bombs remotely from a drone.

He’d rather be involved in direct combat with the Taliban, and the frustration of what is effectively playing a computer game in which the unsuspecting bad guys really do die, while he sits in safety thousands of miles away, is putting pressure on his marriage to Molly (January Jones).

He starts to feel even more alienated when his crew is seconded to the CIA, so that rather than the Pentagon calling the shots, Langley gives them the targets, without explaining who they are or why they’ve been selected.

Egan and his sidekick Airman Vera Suarez (Zoë Kravitz) start raising concerns about the ethics of killing entire groups of Afghans on the CIA’s say-so that one of them might be a member of the Taliban.

Their boss, Lieutenant Colonel Jack Johns (Bruce Greenwood) does his best to play the party line, although at times he seems to be struggling himself – but it’s not a problem for the other two members of the team; a pair of rednecks who like nothing more than being able to kill the enemy with impunity and get home to their families in time for tea.

“Good Kill” is a call you hear less of as the film progresses – as the targets go from Taliban leaders, cleanly picked off one-by-one to groups of men, women and children, who just happen to be in the wrong place at the wrong time.

With an unusually internalised performance for a generally effusive actor, Ethan Hawke effectively conveys the frustration of a man who’s desperate to do his duty for his country, while his country is making it increasingly difficult for him to do it with a good conscience.

The skeleton of the story is somewhat basic but the flesh, provided by the arguments over the morality of what they’re doing, are certainly thought provoking.

Ethan Hawke is struggling to keep his life on track, with the angel of Zoë Kravitz on one shoulder and the devil of Bruce Greenwood on the other.

While it’s easy for the generally left-leaning world of artistic cinema – rather than entertainment industry – to put across the case against drones, it makes a change to see not one but two perspectives in favour – the rather base “kill ’em all” view of the hoi poloi but also the more eloquently argued (expletives excepted) case from the boss and it’s all the more interesting to see the Colonel himself struggling with the morality of the situation when even he begins to doubt what they are doing.

Good Kill is a small drama that effectively highlights the everyday nature of killing the enemy as a 9-5 job, done by people wearing dull-brown flight-suits, living in dull-brown houses on the edge of the dull-brown desert.

It’s no wonder that Major Tom Egan would rather be back in the theatre of war. But that’s the thing that many supporters of this subtly intelligent film might miss – it’s clearly anti-drone, but it’s not anti-war.