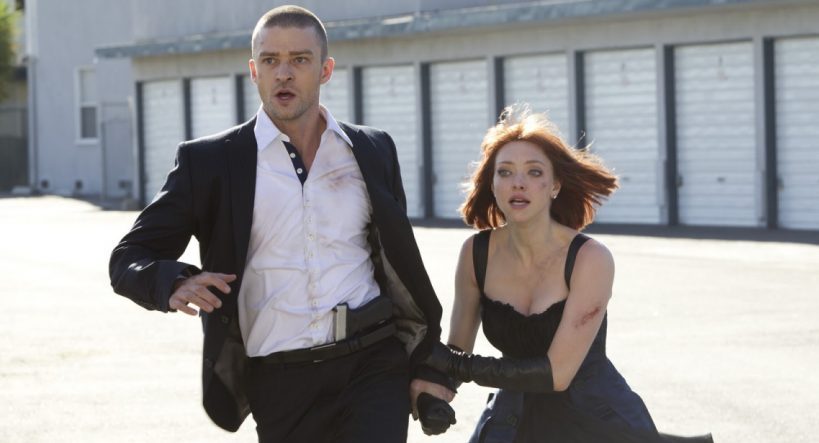 In this world, humans are guaranteed only 25 years of life. Then a clock starts ticking.

You have one year. But time is currency, and every time you jump on a bus or buy a coffee, that’s more time sucked from your life.

Will (Justin Timberlake) works a manual job which doesn’t earn him much time at all. Like everyone around him, he lives from day to day.

When he sees someone brandishing a century around in a bar, Will is worried the guy is going to get beaten up. A gang, led by Fortis (Alex Pettyfer), tries to steal the century, but Will manages to get him to safety. The following morning, he wakes up to find he has the time and the guy is gone – but when the guy’s body turns up, Will is the chief suspect and the time-keeper Ray (Cillian Murphy) is hot on his trail.

Will manages to escape to a rich part of town, where his century won’t make him stand out. He checks into a smart hotel and starts gambling his time in the casino, winning centuries from the time-wealthy magnate Weis (Vincent Kartheiser).

When the heat catches up with him, Will ends up running off with Weis’s daughter Sylvia (Amanda Seyfried) and together, they set out to beat “the system” and free the world from their dependence on time.

Coming from the man who wrote the Truman Show and created Gattaca, another high-concept science fiction film was eagerly anticipated, but it fails to reach the expectations that come with the provenance.

For such a film to work, you have to believe and accept the conceit – Andrew Niccol’s earliest films were credible, possible and even ahead of their time – The Truman Show (a man is living his life, having no idea the world is watching) is a twist on Big Brother, while Gattaca (a world where those with the best genes get the best opportunities in life) brings to mind the increasing use of DNA fingerprinting by insurance companies. But in truth, it’s highly unlikely that our time is going to become our currency anytime soon, which makes us feel more removed from the subject matter.

On one level, the time-as-currency works as metaphor for money, with the richer parts of town inhabited by those with the most time, and the idea that there’s “no time to waste,” but it doesn’t feel convincing, the way some characters live so close to the edge and death can come out of nowhere – the metaphor breaks down at the point where, in reality, the loss of your last penny does not result in your instant death and even in the poorest most hostile parts of the world, humanitarian charities can step in to save the day.

We also don’t get a sense of whether we’re in a world where this is just the human way or whether a single corporation has taken control of the United States in a way that other countries have escaped.

And there appears to be no way for anyone under the age of twenty five to buy anything.

The basic premise has promise, but it hasn’t been executed with the panache of Niccol’s earlier works.

Putting the incoherence aside, it’s interesting seeing pretty-much every character of every age being portrayed by actors who look (or are meant to, at least) in their mid twenties – which creates some uncomfortable moments between parent-and-child! Justin Timberlake delivers a creditable-enough action turn, to contrast with his recent comedic roles in Bad Teacher and Friends With Benefits, but Amanda Seyfried does little more than run along behind him, sometimes appearing to be his side-kick and other times his hostage – almost interchangeably.

Cillian Murphy does his best with the material but prettyboy Alex Pettyfer doesn’t have the menace required to pull off a ruthless gang leader.

It’s more of an attempt at an action film than the social commentary it could have explored.

The plot is a little contrived and convenient, even within its own world, but its an entertaining – if simplistic – parable that will engage for 109 minutes.

But in truth, if spending that time really meant taking 109 minutes off your life, I’m not sure I could, in all conscience, recommend it.