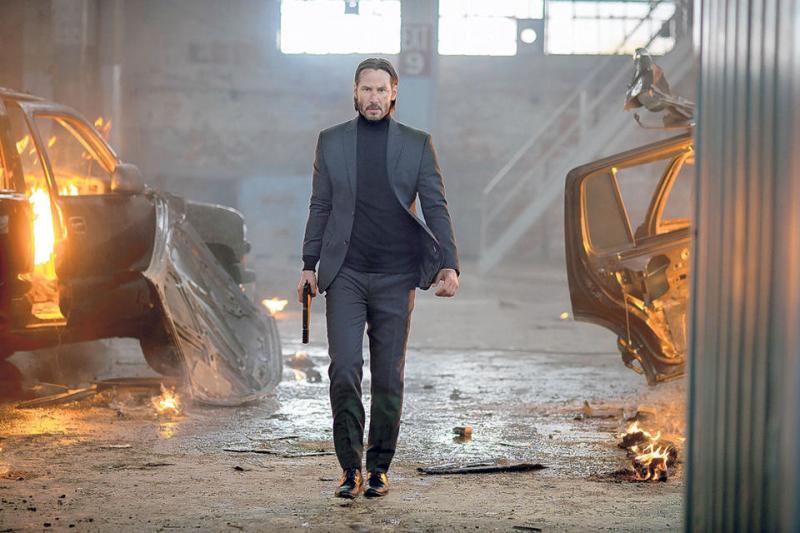 John Wick (Keanu Reeves) has long since retired from his life as a mob hit man.

In recent years, he’s been looking after his ailing wife, but she’s just died, leaving him distraught. As a parting gift, she left him a dog. It’s hardly a replacement, but it gave him one final emotional tie to her.

But one night, a gang of Russian mobsters break into his home to steal his classic car and kill the dog in the process. Losing his two greatest loves – his car and the dog that reminds him of his late wife – is enough to persuade him to come out of retirement to seek revenge.

It turns out that the leader of this little band of thieves (Alfie Allen) is the son of Viggo Tarasov (Michael Nyqvist), one of the most powerful and ruthless Russian gangsters in town. Tarasov used to hire John Wick to do his dirty work…now he has to send every other assassin on his books to try to kill him, before Wick turns up on his own doorstep.

Wick is slick – both the protagonist and his film. With shoulder-length black hair, slicked back behind his ears, and sharp tailored suits, Keanu Reeves looks every bit the type of mob killer you’d expect to pop out of the shadows, pop a handful of bullets in his target and then pop out of sight again.

But the John Wick we meet is a gentle, loving husband of a disease-stricken wife. That this man, who turned his back on crime for the love of a good woman, would return to the life of a ruthless killer, to avenge the theft of the car – and the beating of a dog – seems unlikely – and is likely to leave you on the side of the hapless villains when they scream “It was only a dog!”

Elements of this film strongly recall Liam Neeson’s recent Run All Night – where a rivalry develops between a has-been hitman and his former boss’s wayward son – and last year’s Cannes success, the similarly violent The Rover, in which (SPOILER ALERT) Guy Pearce seeks to avenge the theft of his car…and the death of his dog.

With rivals being knocked down like skittles, John Wick is tightly directed by a former stuntman, with action sequences as well choreographed as you might expect, Willem Dafoe and Ian McShane turn up in enjoyable cameos and there are some nice touches – including a hotel where assassins stay while they’re on a job, on the condition that they don’t kill anyone at the hotel itself.

But the film is so narratively simplistic, formulaic and derivative that it simply has nothing fresh to offer. The “bad guys” are tremendously obvious – when the plot needs them to be – but some then contrive to become opaque when required. And it’s hard to identify with a central character who was a reformed killer, but slips effortlessly back into his murderous ways to seek vengeance for the theft of his car and the death of his dog.

This film will, consequently, perhaps be best loved by dog lovers and classic car collectors – few other viewers will have any emotional connection with its central character.