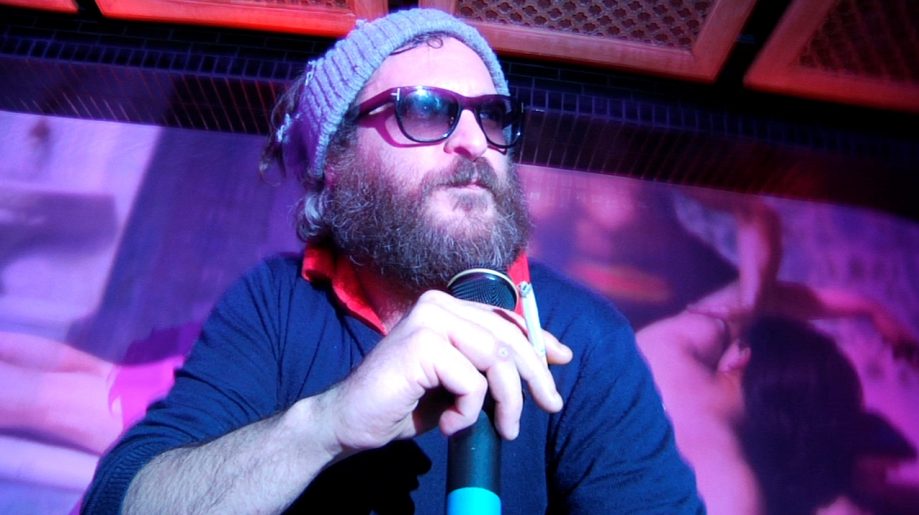 Many people will remember back in the tail end of 2008, the twice-Oscar-nominated actor Joaquin Phoenix shocked the entertainment world by announcing that he was quitting acting to become a rapper.

The story got even more bizarre in early 2009 when he made one of the most surreal television performances in chat-show history, when he appeared on David Letterman’s show, almost oblivious of everything – from the questions to the audience’s reaction – scratching his hermit-like beard as he adjusted his sunglasses and chewed gum, practically unable to string two syllables together without slurring them.

A month later, so surreal was this episode that Ben Stiller became the first of many comics to parody it at the Oscars.

Both of those broadcasts feature in this documentary, in which Phoenix’s brother-in-law and (formerly fellow) actor Casey Affleck follows him and his unbearably sycophantic entourage through this strangest of periods of his life, catching what could be described as almost anything from an extreme emotional breakdown – to a hoax.

Anyone familiar with this peculiar period in the life of Joaquin Phoenix might have been enthusiastic about seeing this documentary in order to find the answers to their questions – the prime one being “was it real?”

In truth, this is not answered, but there are clues – all of which lead to the same answer. Why does the subject of a documentary have a writer credit? Why did the crew take an under-water casing for the camera with them when they followed Phoenix to see his Dad? This cannot be possibly be real – or at least it can’t all possibly be real.

But why would an actor at the top of his game put his reputation at stake to fabricate a fake-documentary which would earn him next to nothing compared with another big payday from a Hollywood studio?

At the start of this film, long before his shock announcement or his Letterman appearance, Phoenix tell’s Affleck’s camera that he’s fed up of being a puppet, saying lines he’s given and being told where to stand – he feels like a fraud and he wants to do something from the heart.

That Affleck is already filming at this stage is another hint at the documentary’s fraudulence. But it is perfectly reasonable for this to be the honestly held feeling of someone who grew up in a family that was swallowed up in the world of entertainment and whose professional career has been singing to everyone else’s tune and never able to express his true feelings. Casey Affleck, like his brother Ben – whose latest film comes out next week – and many other actors, is now taking creative control of his career by making his own films. Perhaps faking this “documentary” is Phoenix’s way of shaking off his own creative frustrations.

It seems most likely that having had true doubts about where his life was going – possibly even having a real breakdown – he and Affleck together devised a way to make the most of it and built a fake film around a real emotion.

How much of it is real – or fake – is hard to tell. But the audiences of Phoenix’s hip-hop shows are no more in on the joke than the viewers of David Letterman or the Oscars, so most of the people reacting to his act – assuming that’s what it is – are reacting truthfully and in good faith. And assuming that Sean Combs is not an actor, his evident bemusement works in the same way. Capturing such responses to Phoenix – whether he’s acting fraudulently or otherwise – is still a documentary, as much as Michael Moore’s set-ups in his Oscar-winning polemic and other highly-regarded so-called documentaries.

Getting a glimpse into the world of a spoilt, paranoid, drug-addled, unsatisfied, bullying, narcissistic, supercilious film star – whether it’s another performance or not – still makes for compelling viewing.

But the further into the past this period recedes and the more he returns to normality, will people praise his bravery for moving on from his breakdown or condemn his chutzpah for trying to get one over on the world.

Does it really matter whether it’s real or fake if it’s entertaining? Yes, we might feel cheated – or disappointed – and as an audience, we want to know the truth.

It would be nice to know whether you’ve just watched a documentary, a fiction based on true events or a completely fake satire that’s taking us all for a merry ride – but why? Out of pride, more than anything else. Ultimately, what really matters is, given that he is not going to sell any rap albums, will he be given acting gigs again? Based on this performance, he’s still got the gift, so why the hell not?