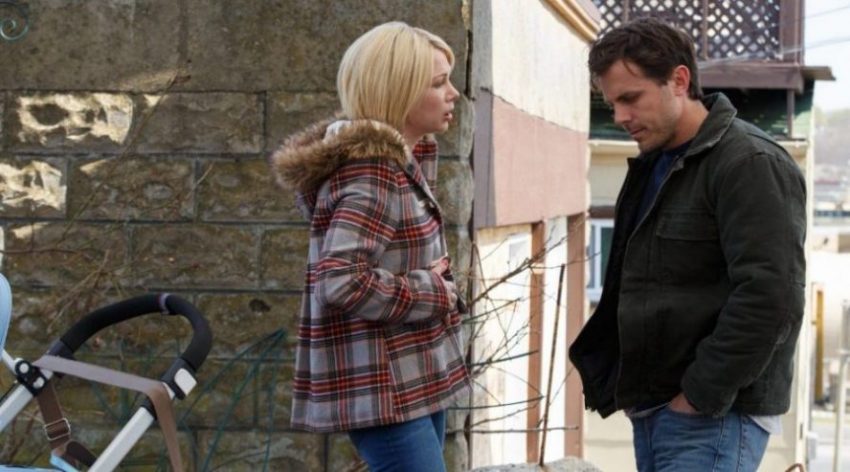 Lee (Casey Affleck) has long since escaped horrors in his past by leaving his home-town of Manchester-by-the-Sea in Massachusetts. He’s now living in a basement studio flat in a Boston apartment building where he works as the janitor.

One winter, his life is thrown into renewed turmoil when he receives a call to say that his brother Joe (Kyle Chandler) has suffered a fatal heart attack, forcing him to head back to Manchester to deal with the arrangements.

At the reading of the will, Lee learns that Joe has named him as the guardian of his 16-year-old son Patrick (Lucas Hedges), who’s settled enough in Manchester – with two girlfriends and a place on the hockey team – that he wouldn’t even consider moving to Boston. But Lee has no intention of returning full-time to Manchester. He cut the past out of his life for a reason.

To add to the logistical problems, the ground is so frozen that they won’t be able to bury Joe’s body until the arrival of spring. The delay forces Lee to stick around in Manchester, reconnect with people from his past and work out the best plans for everyone’s future.

As downcast dramas go, this is up there with the most depressing of them. An unrelenting stream of tragedy and misery is thrown at these characters like confetti at the devil’s wedding.

Casey Affleck’s performance at the heart of this film is complex and nuanced as he navigates the latest difficulties life has thrust at him, before he’s managed to come to terms with the last lot.

He’s a quiet man, whose suppressed rage takes over from his quiet frustration only when he’s drinking alone at the local bar.

With elements of the story unfolding through an effective use of flashback, we meet not only his deceased brother and a younger, more care-free incarnation of Patrick, but also his ex-wife (Michelle Williams) and Joe’s ex-wife (Gretchen Mol), who’d long since been out of his life.

As secrets from Lee’s past emerge in the flashback, much of his present-day pain becomes clearer and puts current events very much in perspective.

In the hands of most film-makers, Manchester by the Sea would be about a man who uses his latest personal tragedy and its associated complications to help him get over a previous tragedy that’s held him back like a ball-and-chain. He’d be learning lessons from the present to help him deal with the past and move on with a new life, unencumbered.

But Kenneth Lonergan gives him no such relief, which is – in one sense – a welcome break from the cinematic formula that we’ve come to expect – but in another sense – it renders the two hours you’ll spend watching this rather pointless. We don’t see characters develop or grow. Lee starts the film as a depressive loner, committed to a life of self-imposed emotional punishment, rooted in the past, and pretty much that’s how he ends. Patrick begins as a self-centred teenager whose only problem with the death of his father seems to be the potential that he might have to move to Boston, and he too fails to grow, learn or develop as a result of his tragic experience. Why would anyone want to watch two hours of misery, heaped upon misery, that leaves most of the characters inhabiting the same emotional space at the end as they were at the beginning?

It’s a shame that we don’t meet the Patrick immediately before the death of his father, because it’s impossible to judge whether he’s playing up because he doesn’t know how to handle the grief or simply because he’s just a typically selfish and bratty teenager. Perhaps it doesn’t matter, because he’s convincing enough in what he does, but the fact that he hasn’t moved on either by the time the film finishes makes you wonder why you bothered.

From a dramatic point of view, the decision that’s finally made that everyone can live with could have been made just half an hour into the film, sparing us an hour and a half of depressing events, making it feel like drama for drama’s sake, rather than helping the characters – or the audience – learn anything useful about humanity and how it copes when at its nadir.

Perhaps the only character who does seem to be trying to move on from the past is Michelle Williams’s ex-wife, who’s the only person who truly elicits any empathy, in a heart-wrenching scene that leaves everyone – including the audience – in tears except Lee. But while she’s part of the reason for Lee’s downtrodden demeanour, her role is insignificant enough to the plot that had her character not changed, it wouldn’t have made any difference to the film’s resolution anyway.

Her aside, we’re being asked to watch a bunch of selfish and generally unlikable characters cope with difficulties no-one would want to face, or indeed wish on their worst enemies – it’s clear why so many of them are so low, and perhaps realistic that they’re not given the Hollywood ending that so many other films might have enforced. There’ll be times when you’ll find yourself shouting “give them a break!” at the screen, when Lonergan finds yet another way to destroy any sign of positivity in the lives of his characters.

Manchester By The Sea will leave you feeling like you’ve had a football kicked at your stomach, while admiring the technical perfection of the kick.