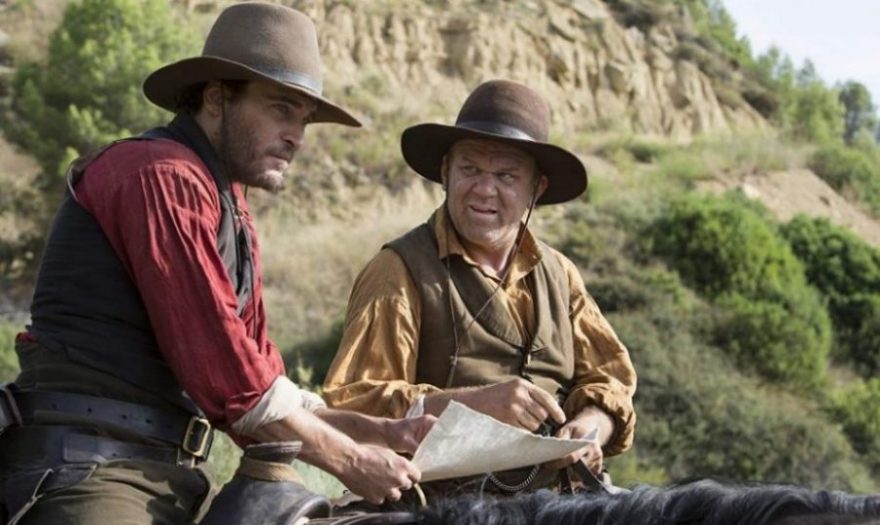 In 1850s Oregon, brothers Eli (John C Reilly) and Charlie (Joaquin Phoenix) Sisters are renowned for their ability to track and kill anyone on the Commodore’s (Rutger Hauer) hit list. Charlie runs the family business and Eli tags along behind, but the sensitive soul is getting tired of it.

On this occasion, the Commodore has hired someone else to do the tracking and all the Sisters Brothers have to do is finish the job. John Morris (Jake Gyllenhaal) is on the trail of Hermann Warm (Riz Ahmed), a chemist who’s come up with a formula to guarantee a healthy haul for gold prospectors.

An unfortunate encounter with something in the woods holds up the Sisters Brothers and by the time they reach the town where Morris has been holding Warm, the pair are gone.

The brothers set off into north California to find out what’s happened.

This first English-language film from Frenchman Jacques Audiard is co-produced by the actor John C Reilly, best known for his comic roles but increasingly trying his hand at drama, most recently in Stan & Ollie.

In this effective western, he delivers a solid performance, laced with warmth and gentle humour, but the wider drama is infused with darker humour, much of which delivers gasps as well as uncomfortable laughs.

But its a typically broody turn from Joaquin Phoenix – a bad cop to Reilly’s good cop, if you like – that drives the manhunt, with equally morally ambiguous protagonists and antagonists crossing the plains in the search of nothing more than wealth.

Jake Gyllenhaal’s tracker and Riz Ahmed’s prey are just a little too polite to be the ruthless, single-minded ne’er-do-wells that the plot makes them out to be. Indeed, there aren’t really any characters that will truly resonate with viewers. Even when Ahmed’s true motives are revealed, his idealism doesn’t garner particular empathy.

The narrative blends traditional western elements with a touch of science fiction, which jars slightly, although there’s not much you can do about that when the film is based on a novel.

But the direction is as confident as the performances, with Audiard peppering the film with uncharacteristically imaginative cinematography for the genre, with some peculiarly dream-like moments – allowing viewers a breather from some of the harsher moments.

Perhaps the most peculiar thing to note is that while the film appears to be building towards an explosive finale, it ends up with a bit of a damp squib – or two, but maybe after so many stomach-churning moments, the audience will be thankful for such relief.