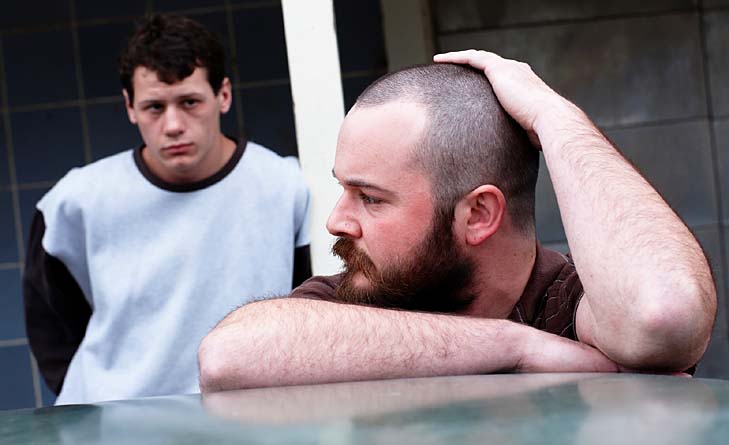 Elizabeth (Louise Harris) kicks her boyfriend out of the house when she catches him taking photos of her sons in their underwear. This seems to be par for the course in the run-down Adelaide suburb that the working classes call home.
When newcomer John Bunting (Daniel Henshall) arrives in town, he’s taken in by the family and soon becomes a father-figure for Elizabeth’s boys, offering the family a sense of stability it hasn’t had for years.
John’s happy-go-lucky demeanour cheers them up and his tough side makes them feel safe.
It’s clear from the outset that John doesn’t suffer fools gladly, but he’s fiercely protective of those he loves.
The boys increasingly look up to John and the eldest – the quiet and unassuming teenager Jamie (Lucas Pittaway) – is taken under his wing. In a moment of bonding, Jamie tells John that he was sexually abused by his older step-brother.
Increasingly, Jamie gets to hang out with the grown-ups but he’s stunned to find out what they’re actually getting up to; while John shows bravado at public meetings, talking about how the community has to be protected from paedophiles, it turns out that in private, he’s actually taking it upon himself to clean up the town.
Torn between his conscience and not being able to betray the only man who’s ever shown him respect, Jamie gets drawn inexorably into the gang of the man who became Australia’s most notorious and prolific serial killer.

This real-life tale from the late 1990s will clearly have the most resonance for the Australians who’ll remember it but it’s a cautionary tale for anyone who’s worried about crime in their community – and a warning that some self-starters could actually let the glory get to their head.
John Bunting clearly saw himself as some kind of a noble vigilante, wiping the paedophiles from the streets he inhabited, but the relish with which he enjoyed the brutal torture that preceded his slayings should have alerted him to the fact that his halo had slipped and he’d become less of an angel than a psychopath.
But a psychopath with charisma is a dangerous combination – allowing him to create a safety net around him as he kills only those people the community wouldn’t miss – as effectively revealed in Justin Kurzel’s biopic, thanks to a refreshingly bold central performance from Daniel Henshall.
Coming across equally convincingly as a jovial Zach-Galifianakis-in-The-Hangover-lookalike father-figure and as a brutal, serial-killing gang leader is no mean feat and Henshall pulls it off with aplomb. He certainly manages to combine two of the qualities Australian cinema seems to do well – being gritty and quirky. But it’s no comedy, and it somehow wouldn’t feel right to suggest that Bunting comes across as being one of the most loveable vicious mass murders the cinema has ever seen.
Defending his actions using his – admittedly warped – moral values, Bunting feels a bit like a working class Dexter – until we realise that he’s becoming less discerning about his victims – extending the objects of his disaffection from paedophiles to homosexuals and beyond – becoming more calculated and methodical in his methods, enjoying his mission a little too much and developing rather too great a hold over his disciples.
The naturalistic, faux-fly-on-the-wall style of the film gives it a sense of immediacy and the low budget production values almost make it feel like we’re watching Bunting’s family videos.
There are some difficulties though. Narratively, it’s not always explained why some of the victims have been picked and the visual style sometimes makes it tough to tell people apart. There are far too many ill-explained and under-explored supporting characters and with lots of close-up shots inside a variety of houses, it’s sometimes tough to work out where we are and who’s doing what to whom or why, all of which makes it quite difficult to follow.
It also feels a little stretched, with a few too many unnecessary bridging scenes making it feel a little looser than it might have done.
But the dominant performance of Daniel Henshall and Lucas Pittaway’s increasingly doting teenager ensure that this chilling study of a cold, but not completely heartless charismatic killer is another fitting addition to the gritty Australian crime dramas that, in recent years, have included the likes of Animal Kingdom, Wolf Creek and back a little further, Chopper.