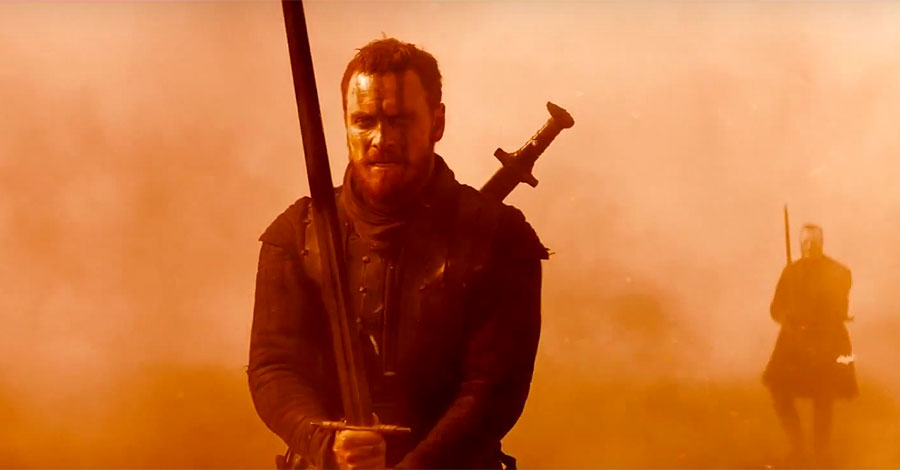 After Scottish nobleman Macbeth (Michael Fassbender) leads his soldiers to victory in a battle, during a bloody civil war, he and his right-hand-man Banquo (Paddy Considine) notice three strange women watching them through the mist.

The witches predict that Macbeth will first be honoured with an additional title by King Duncan (David Thewlis), then he’ll become king himself, but it’ll be Banquo’s descendants who eventually rule the country.

Macbeth is content to leave it all to fate, but after a new title is indeed conferred upon him, his wife (Marion Cotillard) encourages him to take control of his own destiny; why wait for the prophecy to be fulfilled?

During a visit to his village by Duncan, Macbeth does just that – and when Duncan’s son Malcolm flees to England, Macbeth accedes to the throne, as foreseen by the witches.

Macbeth soon realises that if the rest of the prophecy comes true, he has got blood on his hands only for someone else’s sons to reap the glory, so he has no choice but to keep taking fate into his own hands, each time he sees a new threat to his power.

But he discovers that it’s harder than he thought to keep a step ahead of the witches, when another nobleman, Macduff (Sean Harris), who’s still loyal to Duncan, returns from exile, to restore the throne to the rightful heir.

It’s always hard to review a film that’s based on a Shakespeare play. Criticising the plot or the dialogue would be criticising Shakespeare, but while his work should be no more immune to criticism than anyone else’s, it has certainly stood the test of time in a way that most film reviews might not. And it’s also the case that fans of Shakespeare will be well familiar with both the plot and the dialogue before they turn up at the cinema foyer anyway.

But while a reviewer’s hands are somewhat tied, it’s unquestionably acceptable to argue that a particular director’s adaptation of a Shakespeare play – including what he chooses to leave out, in order to meet the more rigid time constraints of the big screen – is fair game. It’s this and his vision that come up for scrutiny.

But while this could be seen as giving someone adapting the work of Shakespeare to the big screen an advantage over someone with an original story, the preponderance of Shakespeare adaptations means that rather than a film being seen in the context of all films ever made, one based on Shakespeare will always be specifically compared with a play’s previous incarnations, arguably putting it under even more scrutiny.

The latest director to throw his hat in the ring is Snowtown‘s Justin Kurzel, like the last person to bring Macbeth to the big screen, Geoffrey Wright, an Australian. But rather than going for any of the oft-used practices of updating the period, modernising the language, changing the situation or moving the geography (Wright’s Macbeth was set among the drug-dealers of modern-day Melbourne), Kurzel has remained faithful to the original play in these fundamental areas.

The medieval setting portrays a land so grim, many might wonder why anyone would want to rule it anyway – little more than a few ragged mountains and cold, shapeless lakes, almost permanently shrouded by a swirling, dark mist. The brutality of the hand-to-hand combat describes a time when violence and strength equated to power.

The cinematography is stunning – no frame would look out of place on a gallery wall – and the editing keeps you on your toes as the bloody battle scenes speed up or slow down to unsettle us.

The language is faithful to Shakespeare’s, with suitably strong Scottish accents from everyone except Marion Cotillard’s Lady Macbeth, who manages to shed enough of her French accent to get across the English Channel, but doesn’t quite make it across Hadrian’s Wall. This will please enthusiasts, but could leave others cold, with the often gruff delivery of much of the heavily accented Shakespearean verse being tough for more inexperienced viewers to decode.

But while it’s hard to fault Kurzel’s visual and aural choices, some of his decisions about how to squeeze the Scottish play into two hours are less successful. In a tragedy that is necessarily grim, many directors might relish the rare moments of levity, but these seem to have been the first to go, leaving us with almost no hint of light to balance the unremitting bleakness. Lady Macbeth – in most renditions of the play, the power-hungry driving force behind his descent from an honourable and loyal general to a ruthless and paranoid monster – has a less prominent, less dominant role.  With so much of the action taking place on the battlefield, there’s less time for the talking and Lady Macbeth is largely confined to barracks, allowed out to make two or three key speeches, before disappearing again. Viewers who are familiar with the source material will be able to fill in some of the gaps, but for relative newcomers, the narrative might seem a little more difficult to follow.

An actor as intense as Michael Fassbender seems perfect for the title role and most of the other cast suit their roles – Paddy Considine quietly underplays Banquo while the man who is essentially the hero of the piece, Macduff, is, in an interesting piece of against-type casting, played by Sean Harris, who is more used to portraying international criminals (Mission:Impossible – Rogue Nation), demons (Deliver Us From Evil) and other such creepy bad guys.

Having considered the editing down of the manuscript to fit the screen and the archaic language, there is a third area in which the film will appeal most to those already familiar with the work – for newcomers to a story, it’s hard to persuade them to empathise with a blood-thirsty megalomaniac, who takes his guidance from mysterious witches and a troubled wife – even suggesting that the couple lost a child at a tender age, while explaining one cause of their turmoil, won’t win over audiences, who would find it easier to root for the minor characters on the sidelines.

Justin Kurzel’s Macbeth is a visual treat – a gritty, powerful, pounding and visceral triumph as a piece of art as it appeals to the senses, but it’s not a seminal adaptation and is unlikely to win over new enthusiasts to one of the bard’s most notorious anti-heroes.